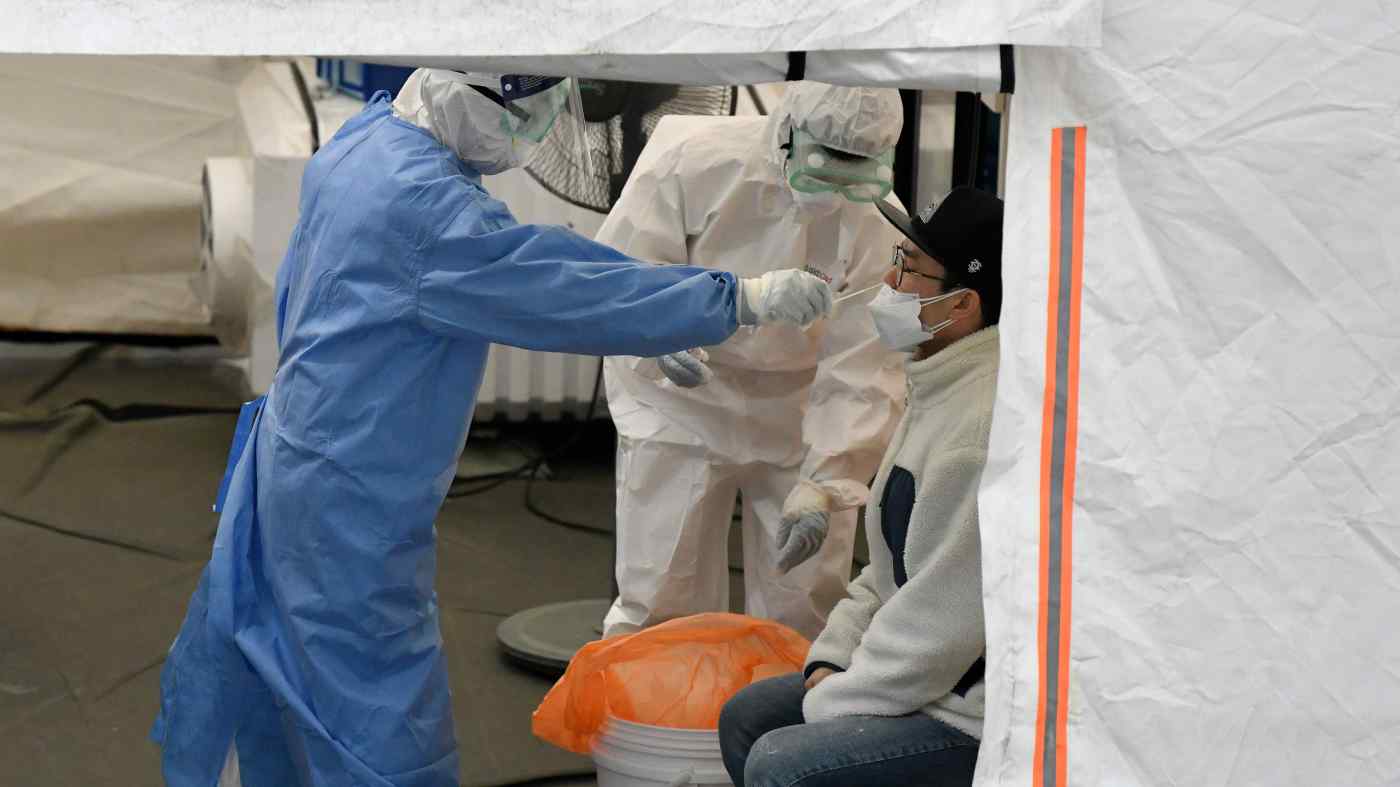 A medic takes test samples for the coronavirus from a visitor at a testing station in the nightlife district of Itaewon in Seoul on Tuesday.   © AFP/Jiji
KIM JAEWON, Nikkei staff writerMay 14, 2020 14:16 JST | South Korea
CopyCopied

SEOUL -- South Korea is aggressively testing and tracing thousands of people who went to nightclubs in central Seoul, in a bid to prevent an explosion of infections from a new coronavirus cluster.

Health authorities said Wednesday they were confirming the identity of the clubbers in the nightlife district of Itaewon between April 24 and May 6. They are reviewing guest books and credit-card payments at venues, and asking telecom companies to provide location information of people who are suspected of being infected.

The authorities, with the backing of of 8,600 police officers, are also trying identify people from CCTV footage in the clubs.

To date, 133 people related to nine clubs have been confirmed with COVID-19, making it the second-largest cluster so far in Seoul. Among them, 82 were infected after going to the venues, with 51 catching the virus from the visitors.

About 35,000 people have been tested in relation to the club cluster. The number of new daily cases nationally reached 29 on Thursday, 20 of which were tied to Itaewon. Infections had been under 20 for the previous three weeks.

Jung Eun-kyeong, director at the Korea Centers for Disease Control & Prevention, asked people who had been to the clubs to take tests as soon as possible.

"COVID-19 is a cruel virus. It hurts people close to you hugely," Jung said in a press conference. "I ask you to take test as a responsible citizen." Pedestrians walk past a night club in the nightlife district of Itaewon in Seoul on Tuesday. The club is now closed after a cluster of coronavirus cases emerged in the area.   © AFP/Jiji

An issue for authorities was that the clubs are frequented by the gay community. In a country where there is much prejudice against homosexuals, some of the clubbers lied low to avoid demonization. Anonymous testing has helped more people to come forward.

Health authorities said that Gangwon Province is using QR codes to check visitors to clubs -- many people who went to the venues in Itaewon gave false names in guest books to avoid identification -- and are considering adopting this practice in other regions. They also said they are weighing the use of Bluetooth technology to trace people.

The club outbreak came a few days after South Korea loosened social distancing rules on May 6, reopening public libraries, galleries and museums. While clubs and bars have been closed, the government has said it has no plan to strengthen guidelines, it has pushed back the date of reopening schools one week to March 20.

"The cluster infections at entertainment facilities shows that similar cases can happen whenever and wherever, even though the curve has flattened," President Moon Jae-in said on Sunday. "It is not over until it is over. We should not unleash quarantine until the last minute."

Total infections in the country reached 10,991 on Thursday, with 260 deaths.

In the early days of the outbreak, South Korea conducted about 15,000 tests a day to limit the spread of the virus, setting up clinics with drive-through and walk-through testing. The country also traced people based on their credit card payments, telecom data and assistance from the police.

The government seeks to share its model of testing and tracing with other countries, hoping to make its method the international standard.

The Ministry of Trade, Industry and Energy said last month it will submit its way of tracing infected people along with other quarantine methods to the International Organization for Standardization.

"International standardization of the K-quarantine model will boost our reputation all over the world as well as help us lead bio industry in the global market," said Industry Minister Sung Yun-mo.