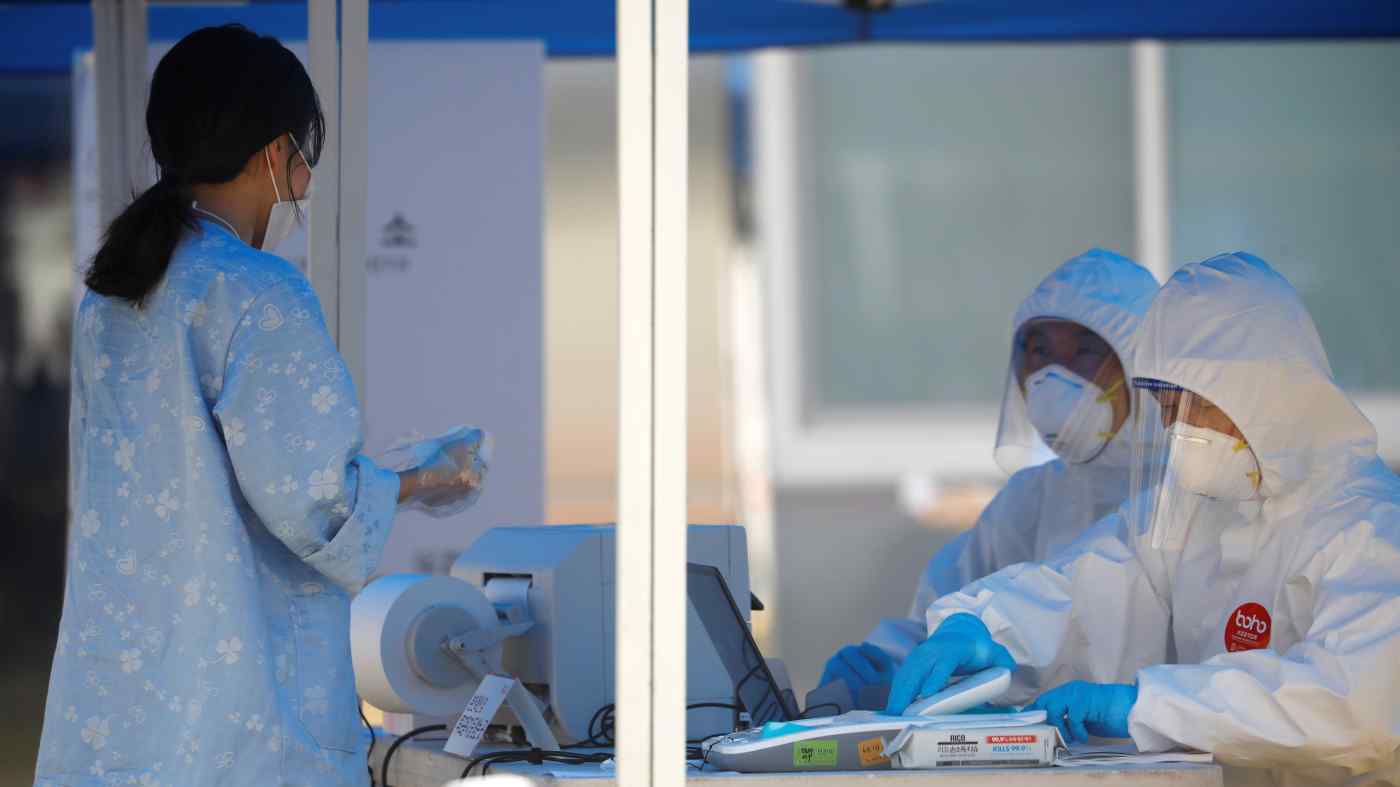 A South Korean patient affected with the coronavirus disease arrives to cast her ballot for the parliamentary election at a polling station set up at a quarantine center in Yongin, South Korea on April 11.   © Reuters
SOTARO SUZUKI, Nikkei Seoul bureau chiefApril 20, 2020 05:49 JST | South Korea
CopyCopied

SEOUL -- The South Korean government has decided that people who defy quarantine measures will have to wear special electronic wristbands. The move is meant to help contain the coronavirus, although some lawyers have raised concerns about human rights violations.

According to the Ministry for Health and Welfare, the wristband is connected to a mobile tracking app via Bluetooth. It alerts officials if people who are confined to their homes for suspected infection with COVID-19 stay away from their smartphones or try to destroy the wristband.

The wristband also checks for fever and other health conditions via a sensor twice a day. In addition, the app asks the person to confirm his or her location if it is not used for a certain period of time. Police will visit the home if there is no response.

The government has been striving to contain the spread of COVID-19. In late March, a new immunological tracking system began full operations. Taking part are the Korean Centers for Disease Control and Prevention, the Korean National Police Agency, the Credit Finance Association, three mobile carriers, and 22 credit card companies. The system can detect where infected people are, and who they contacted within 10 minutes. The task previously took a full day.

Movements of infected people are shown in detail on local governments' websites. Although the information is released on an anonymous basis, patients can be identified in their neighborhood or workplace.

The government has assumed a "zero tolerance" stance for people defying quarantine. A person who breaks the stay-at-home orders can be sentenced to a year in prison or fined 10 million won ($8,217). Foreign violators will be deported.

The government decided to use electronic wristbands following numerous cases of people tricking the previous government tracking method. For example, one foreign student went outside for flower viewing, leaving his smartphone behind. When no one answered the phone, a government official visited the home and confirmed the student's absence, resulting in a deportation order.

When the ministry floated a plan to introduce wristbands on April 7, critics raised concerns. In a statement issued two days later, the Korean Bar Association said the measure lacks legal grounds and could infringe people's constitutional right to privacy, freedom and self-determination of personal information.

Calling for the government to carefully deliberate on the matter, the association also pointed out that a majority of people who abide by the stay-at-home rule would be considered potential criminals.

Also on April 9, the National Human Rights Commission said the measure must be practiced to the minimum extent based on strict deliberations and legal grounds with regard to limits to personal basic rights, balance with the public interest and minimization of damage.

Once human rights, fostered over many years, are undermined in an emergency situation, it will be extremely difficult to rebuild them, the commission said.

The government thus decided to withdraw its initial plan to put wristbands on all self-isolators and only apply them to violators with their consent.

On the other hand, the use of wristbands was supported by 80% of South Koreans in an opinion poll conducted by the Ministry of Culture, Sports and Tourism on April 8-9. The finding means that South Korean society prioritizes the containment of the coronavirus and is not hesitant about the government 's approach.

This was highlighted on Wednesday, when the general election was held -- with the ruling party claiming that the country's epidemic prevention system is a model for the world, South Korean voters gave it a landslide victory.