Flights turned away and travelers quarantined as infections surpass 4,000 SEOUL -- More foreign governments are moving to restrict entry from coronavirus-hit South Korea, with the tally reaching 81 as of Monday.

Infections rose 599 from a day earlier to 4,335, the government announced Monday.

Thirty-six countries and regions are barring arrivals from all or part of South Korea, while 45 are requiring such steps as 14-day quarantines, according to the Ministry of Foreign Affairs.

The U.S. has not restricted arrivals but has raised its travel warning to the highest level, "do not travel," for the city of Daegu and to "reconsider travel," the second-highest level, for the rest of South Korea.

Countries have barred flights from South Korea from landing or quarantined passengers without notifying Seoul.

On Saturday, an Asiana Airlines flight to Hanoi was forced to return to Incheon International Airport. China has ramped up quarantines of air travelers, with a South Korean newspaper reporting that more than 120 South Koreans were being isolated in Chinese hotels as of Sunday. 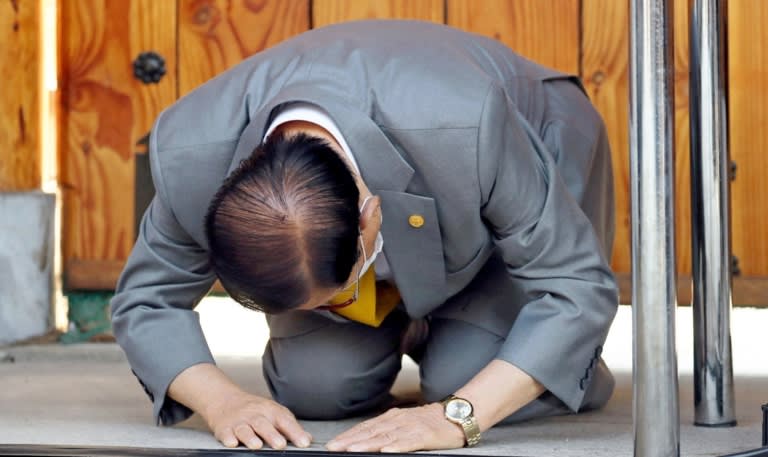 Lee Man-hee, founder of the Shincheonji Church of Jesus, kneels in apology at a news conference on March 2 in this photo provided by the Yonhap News Agency.   © Reuters

More than 70% of the COVID-19 cases in South Korea are in Daegu. The city's medical infrastructure is overwhelmed, with too few hospital beds to treat all of the infected.

About 60% of South Korea's cases are believed to have picked up the virus at a Shincheonji Church of Jesus branch in Daegu. Seoul has asked prosecutors to investigate the church's founder and leader, Lee Man-hee, for potential charges including homicide for not cooperating to prevent the spread of infections.

Lee apologized at a news conference Monday, saying the spread of infection was unintentional and pledging his cooperation.