Panasonic and Toyota scale back in Indonesia amid world's worst outbreak 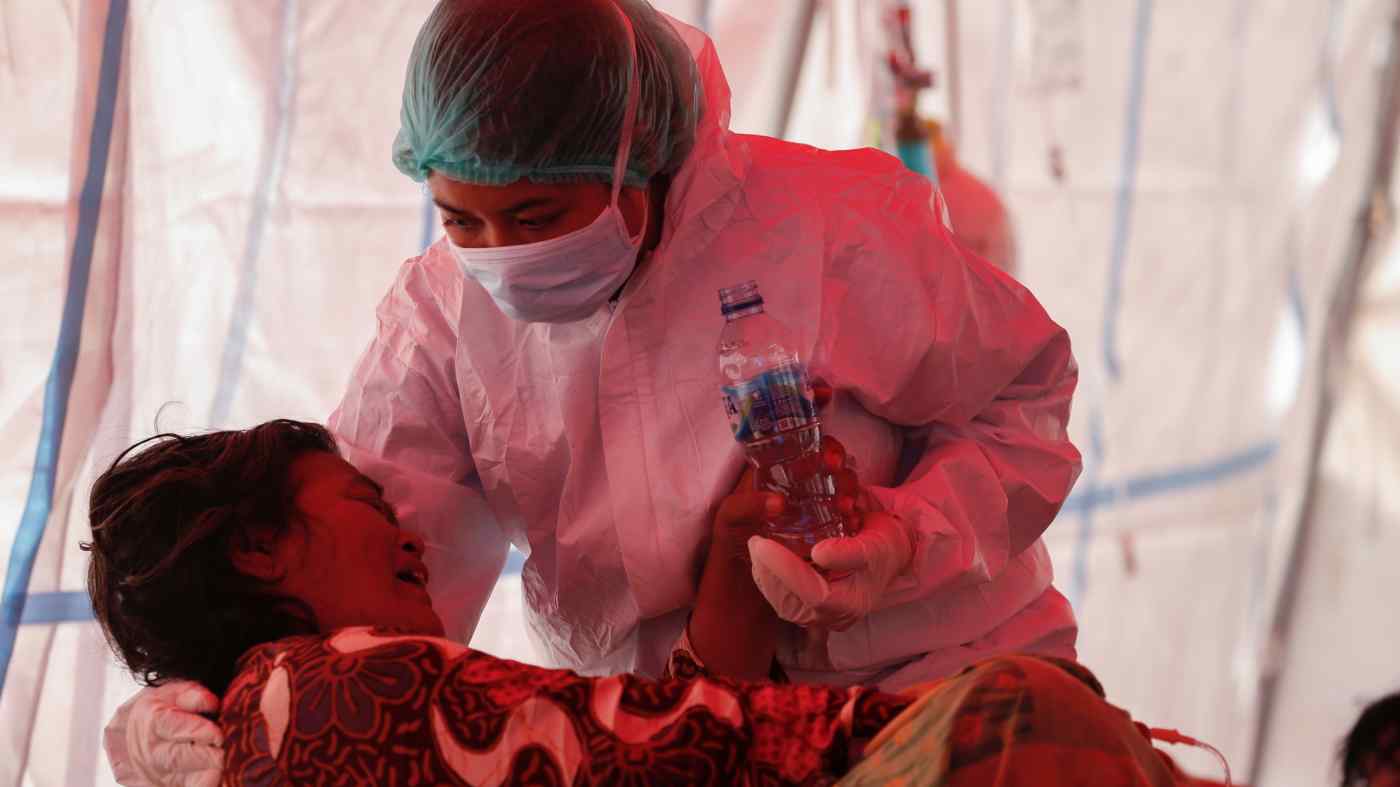 JAKARTA/SINGAPORE -- As the highly contagious delta variant of the coronavirus tears through much of Southeast Asia, Japanese companies and authorities are moving to get Japanese nationals back home.

At noon on Friday local time, the Japanese Embassy in Indonesia stopped taking requests for seats on chartered flights to Japan for citizens living in the country, with nearly 2,000 people hoping to get on board. All Nippon Airways is set to begin flights Wednesday, followed by Japan Airlines on July 25.

The rapidly deteriorating conditions in Indonesia, now suffering from the world's worst COVID-19 outbreak, and other countries experiencing record waves of cases have spurred a flight to safety -- and forced many manufacturers to cut back their operations.

At the same time, Japan is sending vaccines to Asia. Taiwan, Vietnam and Indonesia each received an additional 1 million doses under plans announced this week by Foreign Minister Toshimitsu Motegi, bringing their approximate cumulative totals to 3.37 million, 3.1 million and 2 million doses.

Indonesia's seven-day rolling average of new daily infections reached 44,145 on Thursday, surpassing previous leader Brazil's, according to Our World in Data. Case counts hit new records on four straight days through Thursday, and the country on Friday reported 1,205 deaths in the past 24 hours, its highest tally so far. About 360 Japanese nationals had contracted the virus as of Friday, with 14 deaths, according to the embassy.

Mitsubishi Heavy Industries, IHI, Mitsubishi Electric, Nippon Telegraph & Telephone, Mitsui & Co. and Mitsubishi Corp. had all made the choice by Friday to have Japanese workers leave.

Panasonic has slashed staff at Indonesian production facilities by more than half while continuing to make appliances and electronic components. Toyota Motor began reducing output Monday without providing details on the scale or a time frame for returning to normal operations, while Daihatsu Motor has reduced production by about 30% compared with pre-coronavirus levels.

The Japanese Embassy in Malaysia is receiving a growing number of queries from Japanese residents about whether flights will be chartered there as well, as daily cases topped 13,000 on Thursday, the highest total yet. More companies are considering sending expat workers and their families back to Japan, according to the embassy.

The impact of the outbreak itself is compounded by a lockdown there that has largely shut down nonessential businesses.

"Even in the industries that can keep operating, many companies actually can't keep factories running because parts suppliers have closed their doors," said an executive at a Japanese company, who raised concerns about a longer-term slump in business activity.

Daily infections in Thailand have exceeded 8,000 for days, reaching a new high of 9,692 reported Friday to lift the cumulative total roughly 20% over a week to more than 380,000 as the delta variant sweeps through Bangkok and elsewhere.

About 90% of Bangkok's roughly 1,000 hospital beds for severely ill patients were occupied Thursday, according to the health ministry. The capital's Samitivej Sukhumvit Hospital, used by many Japanese residents, had completely filled its 72 standard rooms and 18 intensive care unit rooms for coronavirus patients.

While the country -- a manufacturing hub for a diverse array of industries -- has yet to see a significant hit to production, that may not last. Sony Group, which makes smartphones there, sees a potential risk to parts supplies due to a recently imposed curfew.

In Myanmar, the Japanese Embassy emailed Japanese citizens Tuesday encouraging them to consider returning home if their presence in the country is not essential.

The health ministry has reported more than 4,000 new cases per day -- a figure seen as a significant undercount, as testing is limited to people showing COVID-19 symptoms. The health care system was already strained by the unrest in the wake of the February coup on top of the pandemic, and many residents have no choice but to receive care at home.