Nation juggles containing the virus and welcoming the Olympics in July TOKYO -- Japanese Prime Minister Yoshihide Suga set a target of vaccinating 1 million people a day, as the country extended an emergency decree now in effect in Tokyo and three prefectures through May 31.

The state of emergency was due to expire on Tuesday, but the Suga administration has decided to fight on against the current wave of coronavirus infections -- an admission that of the battle Japan faces ahead of the Tokyo Olympics, due to start on July 23.

"Vaccines are the key to fighting the ongoing infections," Suga told reporters in Tokyo on Friday evening. "It will be crucial to accelerate vaccinations" as infections from COVID-19 variants have been increasing in major cities.

"With a target of 1 million doses per day, the government will do everything in its power to support local governments in completing two doses of vaccinations for all elderly people who wish to receive them by the end of July."

Japan is set to receive an additional 50 million doses from Pfizer by the end of September and is in talks with Moderna and Novavax to receive a total of 200 million doses for next year. Suga, however, did not provide a specific target date for completing vaccinations for the general public.

Regarding the Olympics, Suga said that Pfizer has offered to donate vaccines to athletes participating in the games. "It is possible to hold a safe and secure event while protecting the lives and health of our citizens through thorough measures."

Suga said the current state of emergency has been effective as it has led to less people going outside, and the criteria for lifting the decree will be whether prefectures can come out of Stage 4 -- the worst tier on the government's scale on the pandemic's severity.

However, "the number of new infections is still high with some prefectures experiencing a strain on hospital bed capacity," he said. "We will take measures to prevent the spread of the coronavirus variant."

Suga added that those entering the country from India, Pakistan and Nepal will be asked to isolate for six days at hotels.

The move to extend the state of emergency gives the government time to accelerate its vaccination program. On May 24, it will open large-scale vaccination sites run by the Self-Defense Forces.

The state of emergency will be kept in place for Tokyo as well as Osaka, Kyoto and Hyogo prefectures. Aichi and Fukuoka prefectures will be added on Wednesday.

Also extended through the end of the month is a quasi-state of emergency that will cover Saitama, Kanagawa, Okinawa and two other prefectures. To this list, Hokkaido and two more prefectures will be added on Sunday. 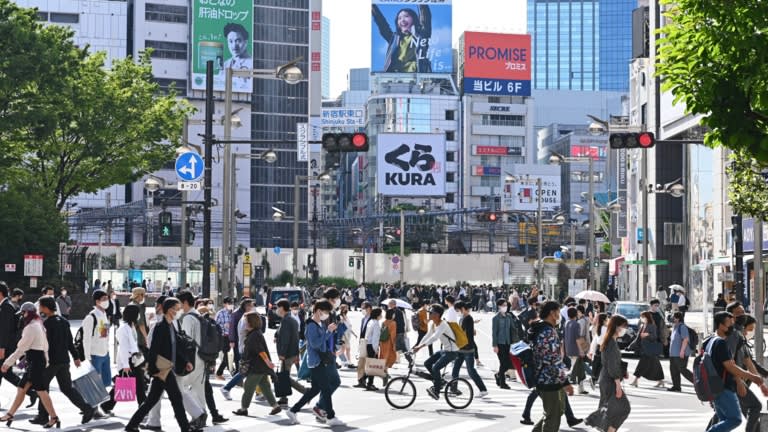 Pedestrians fill a busy intersction near Tokyo's Shinjuku Station as Japan battles COVID variants and prepares to host the Olympics.

In prefectures covered by the state of emergency, alcohol-serving restaurants and bars must not open their doors. At establishments that remain open, customers are prohibited from bringing in their own alcohol. In addition, all restaurants must close by 8 p.m. People are also urged not to drink together outdoors.

The central government's guidelines state that department stores, shopping malls and movie theaters are allowed to operate till 8 p.m.

As for concerts and sports events, spectators are limited to 5,000 or half the venue's capacity, whichever is lower. Events must conclude by 9 p.m.

Requests for residents to not leave their homes for nonessential outings and for people to not cross prefectural borders will be kept in place. Businesses are asked to reduce the number of people commuting to work by 70%.

In addition, either requests or orders can be issued to shops to shorten their business hours or to close. Violators will be fined up to 300,000 yen ($2,750).

Each prefectural governor also has the authority to impose tighter restrictions. Tokyo Gov. Yuriko Koike said Friday the capital will continue to request commercial facilities like department stores to remain closed during the emergency.

In the prefectures under the quasi-state of emergency, similar restrictions are in place.

The coronavirus state of emergency, Japan's third so far, was declared on April 25. It was intended to contain the rapid spread of the new variants during Golden Week, a series of holidays that spans late April and early May.

The variants, known to be more virulent than the original strain; are wreaking havoc in India and other nations.