Taiwan and Japan lead the way in post-coronavirus reopening

Indonesia and Singapore trail as they struggle with new outbreaks 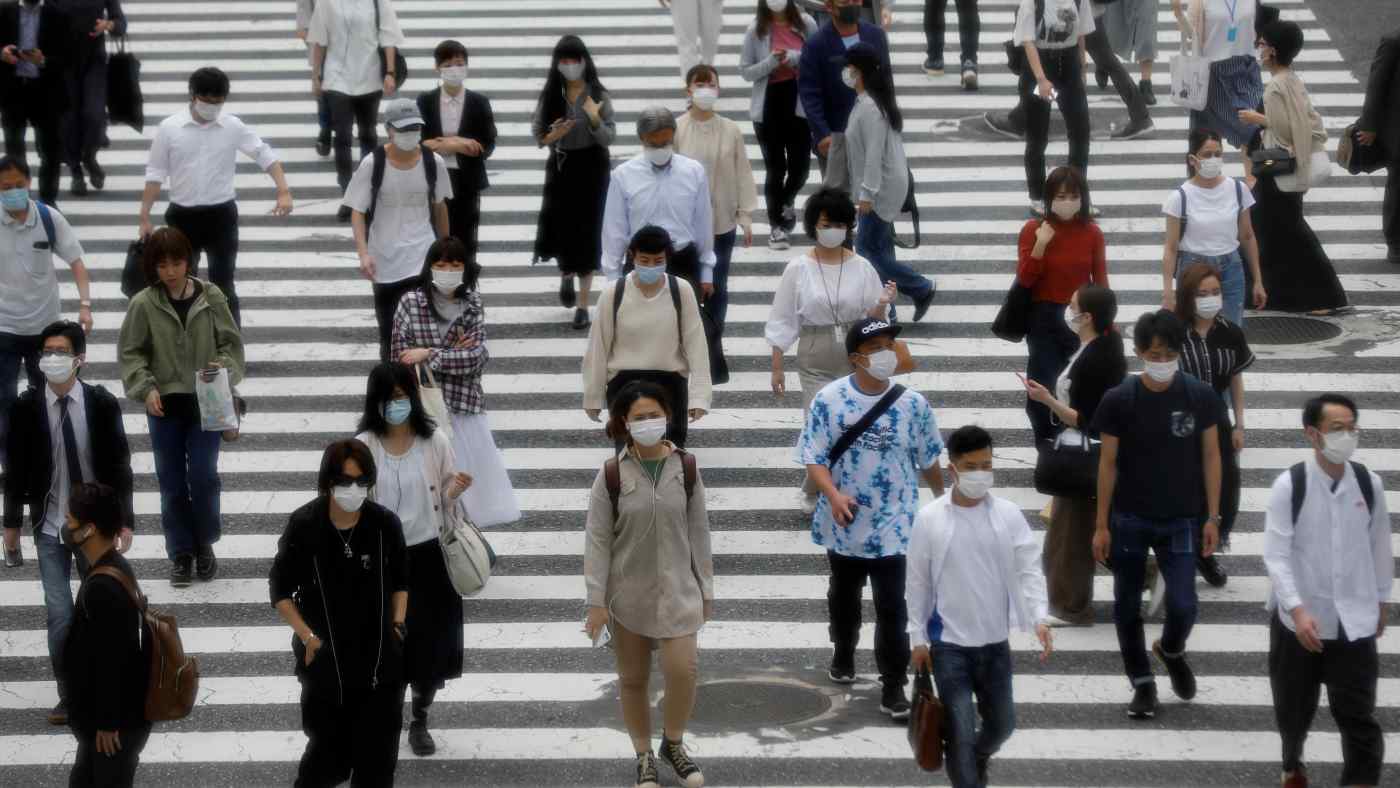 TOKYO -- More economies in Asia are reopening, with people returning to work as countries and regions continue to battle the coronavirus.

Economic activity is picking up around the world as mobility restrictions are eased in major economies. The data also shows how stock markets have been resilient in economies where more people are back at work.

Taiwan, for example, has had almost no domestic infections since late April. According to the Google report, the number of people at workplaces is 2.7% higher than before the coronavirus outbreak. On Friday, the Taiwan stock index was down 0.9% from the previous say, a small decline compared with the 6.9% drop in the Dow Jones Industrial Average on Thursday.

In South Korea, people's movements at workplaces have returned to almost normal levels, down just 2% versus pre-pandemic levels. The government has carried out a virus testing program and used tracing apps to contain the pandemic. The Korean stock index was 2% lower on Friday. 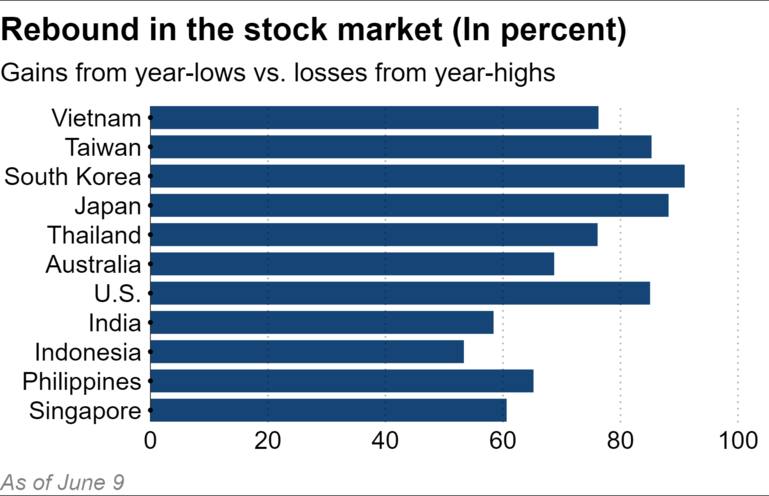 In Japan, the Nikkei 225 index was down 0.75% from the previous day, following the plunge on Wall Street. Japan's stock markets have been on the upswing over the last few months.

The state of emergency was lifted by the Japanese government on May 25 and the Tokyo Metropolitan Government announced Thursday that its business-closure requests will be eased.

The number of people commuting to work was down around 20% in early June, versus before the outbreak. Since many people are returning to their offices, "[the number of] parents who bring their kids to day care has been rapidly increasing since the beginning of June," said a woman who works at a nursery school in Tokyo.

By contrast, in the last few months, the rebound in share prices has been weaker in Indonesia, where data shows many people are still not back at work. The archipelago recorded 1,241 new coronavirus cases on Wednesday, the biggest daily increase so far.

Although there has been no nationwide lockdown in Indonesia, provinces have set their own social distancing rules to combat the pandemic. These include having people work remotely, with the exception of those in essential industries.

Since early June, some regions, including Jakarta, have begun relaxing the restrictions. Offices, street stalls and stores are now allowed to open in the capital at 50% of capacity. Shopping malls and department stores will open from next week.

Singapore's equity market has also underperformed compared with its neighbors, and many people have not returned to their workplaces. The city-state is struggling to halt the spread of infections in dormitories where many migrant workers live. Many shops remain forcibly closed.

The data also shows changes in movement. Apple has released mobile phone data on people driving, walking and taking public transit, with the beginning of January used as the baseline. 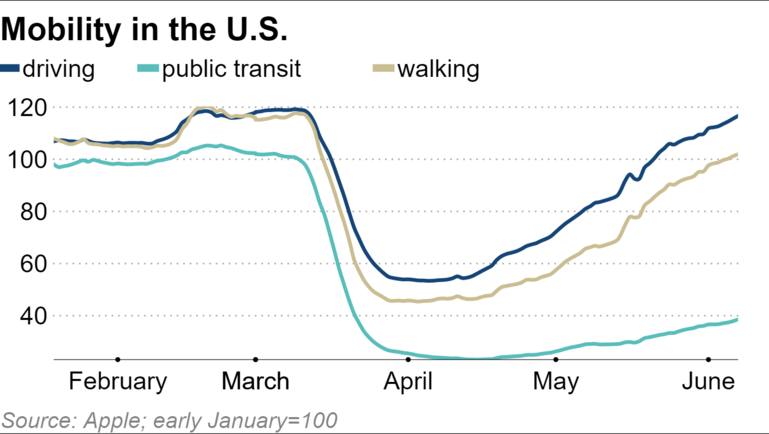 In the U.S., the number of searches on Apple Maps for directions on public transit has fallen by 60%, while driving is above pre-pandemic levels.

In Japan, on the other hand, where many people use public transport to get around, driving and use of public transit have declined at roughly the same pace.

Google and Apple do not provide data on China, where the virus first appeared and which has reopened ahead of other countries. However, according to Dutch location data provider TomTom, vehicle traffic is recovering rapidly. By analyzing driving time, TomTom provides a traffic congestion index in big Chinese cities.

Traffic volume fell sharply in late January but has picked up sharply since March. It been near pre-pandemic levels since the Labor Day holiday season in May. 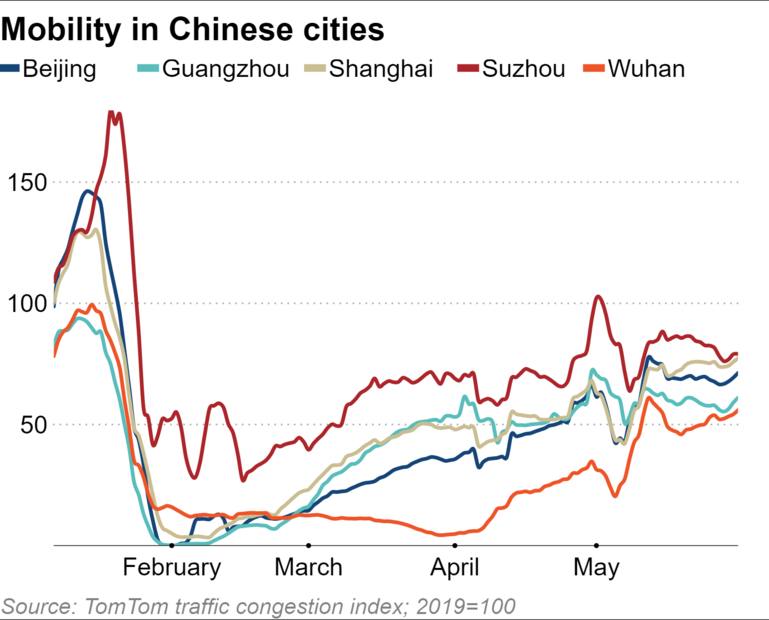 The recovery has been especially strong in Suzhou, an industrial town with many Japanese-owned factories. Daikin Industries restarted production in early February and has returned "to the normal level seen before the coronavirus outbreak," said a company official.

Traffic has also rebounded in Wuhan, the epicenter of the pandemic and capital of Hubei Province, since the city's lockdown was lifted April 8. Cargo flights and shipping between Wuhan and cities abroad have been picking up since May. Nissan Motor, which has a factory in Hubei, saw car sales rise, year-on-year, for the first time in eight months in April.