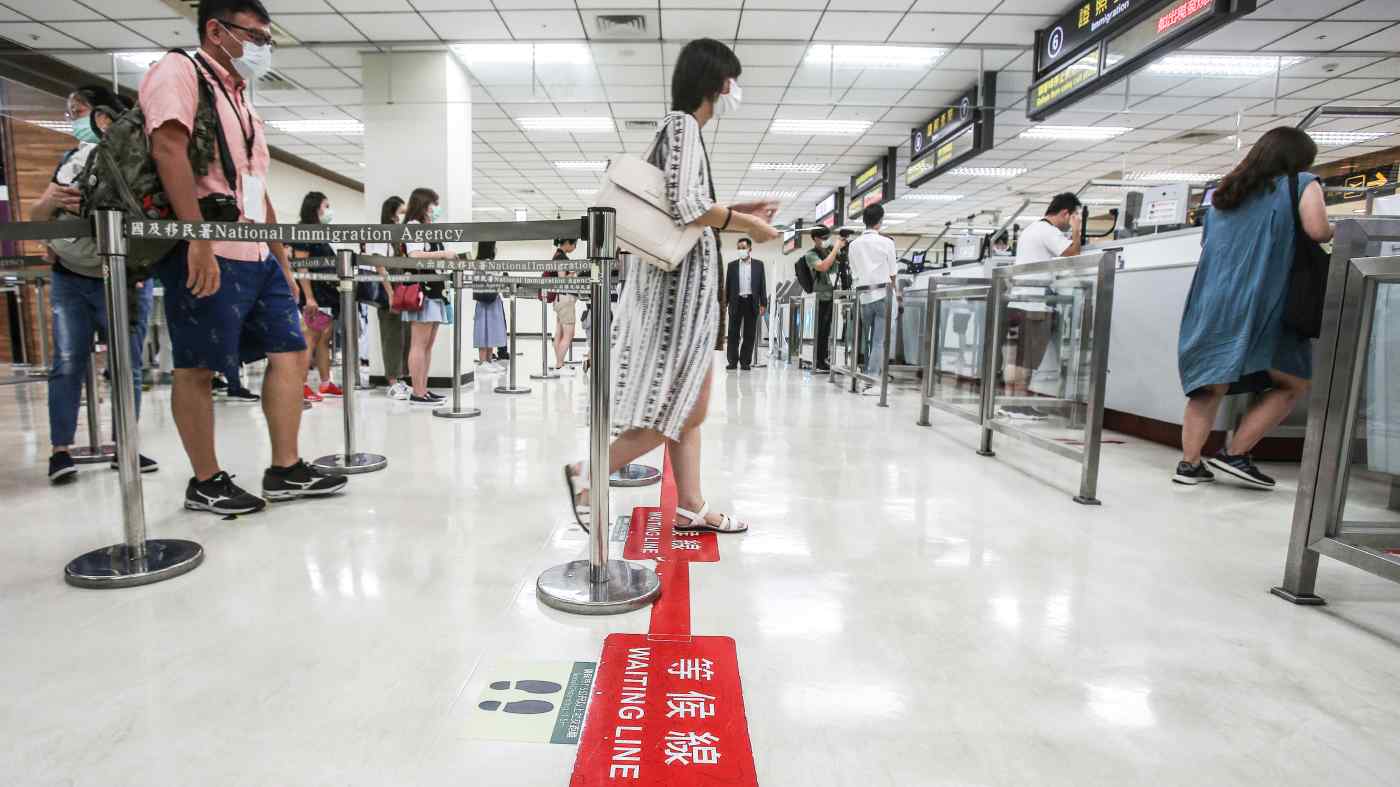 TAIPEI -- It should have been a coup for Taiwan. A respected China-watcher was planning to relocate to Taipei with his family after he found, like many foreigners, that working on Chinese soil was increasingly risky.

He received the prestigious gold card, a special resident permit reserved for expert professionals, and everything seemed to be falling into place. His son was accepted into the Taipei European School, where he is supposed to start school at the end of the month.

Instead, the expert, who asked to remain anonymous for professional reasons, flew to the U.S. this week because while he had the documents to enter, his wife and son were locked out.

Taiwan's border is open to travel for citizens and foreigners with residency certificates, but since May 19 its overseas offices stopped issuing new residency visas when the island went into semi-lockdown due to an unprecedented spike in COVID-19 cases. The ban also impacts foreigners who obtained a visa before the movement restrictions were imposed, but were unable to travel before then.

But while many lockdown conditions have been lifted as daily cases hover in the single digits, the Center for Disease Control and the Bureau of Consular Affairs have given no indication of when they will resume normal operations. This is leaving foreigners both inside and outside Taiwan in the lurch and with no sign of when their situation will change, although an exemption was recently made for degree-seeking international students.

"It seems to me Taiwan risks really losing out by not finding a point of flexibility within continued border restrictions," the expert said, adding that he was happy to fulfill Taiwan's other requirements such as 14 days of hotel quarantine and multiple PCR tests.

"The frustrating things are the lack of clear communication about conditions for issuing visas and the apparent disconnect between the vigilance (against COVID-19) argument and the refusal to allow foreign nationals with a valid reason for being in Taiwan."

There are around 789,000 foreigners in Taiwan, the vast majority of whom need a work permit from the Department of Labor, a resident visa to enter Taiwan from the Bureau of Consular Affairs, and an alien resident certificate (ARC) from the National Immigration Agency to be able to work legally and re-enter the island. During COVID-19, the ARC has become essential to be able to fly in and out.

Different classes of visas and work permits also come with an array of requirements. For instance, cram school teachers require a different health check prior to receiving a work permit than a factory worker or a Chinese language-student. Spouses of visa-holders have their own health check while Gold Card applicants do not need one.

Switching between visa classes typically requires an individual to leave Taiwan and re-enter unless they are among its approximately 39,500 foreign professionals. They are the only foreigners who have the right to convert their visa on Taiwanese soil from a visitor visa or visa exemption to a residency visa once they obtain a work permit, although gold card holders enjoy more flexibility.

Such arrangements are in place in Taiwan, as in other places, to discourage fraud, according to Wu Pei-hsu, an associate lawyer at Winkler Partners in Taipei, who said in the past foreigners might use fake marriages or a Chinese-language study visa to work in Taiwan.

"The government wants to avoid these [fraudulent] situations. In contrast, white-collar foreign workers have a higher social economic status, and the government trusts them more if they come from one of the 23 visa exempt countries, so they are allowed to switch visas in Taiwan," she said by email.

The problem, however, is that much of this information is not available online in either Chinese or English, which has led to some nasty surprises even for people with job offers or university acceptance letters.

In other cases, foreign spouses of Taiwanese nationals, Chinese language students -- including the author of this article who came to Taiwan in November 2019 on a language study visa -- and people holding business visas or working holiday visas have been told they must leave Taiwan to receive a residency visa. Under the current restrictions, this effectively bars them from returning to Taiwan indefinitely.

"There's a real tendency in Taiwan where they don't want to give the low-level civil servants who make these decisions about visa applications a whole lot of latitude. I think maybe in the past there were concerns about possible corruption, but these days it's just felt they should have black and white lines they should operate in, so they make these strict, overly broad rules that are not public," said Michael Fahey, an American lawyer who is a member of Winkler Partner's corporate commercial practice.

Fahey, however, said this situation is largely unusual for Taiwan where most government information is readily available online.

After returning Hong Kong to wait out the process and get a Covid-19 vaccine, Wai was finally approved for a residency visa in May as Taiwan shut its border. Now working remotely for the NGO, she said she will have to reapply for a new visa when Taiwan's consular operations resume as her current one has just expired.

"I've had my Taiwanese colleagues update me every day about the Covid situation, but they've also done a significant amount of research about my situation," she said. "They went to the Bureau of Consular Affairs, and with each question the personnel had to find a new colleague to answer it."

If Wai had entered Taiwan as a visitor on her New Zealand passport instead of on a working holiday visa, however, she could have applied for an ARC without returning to Hong Kong under the current immigration scheme.

For Taiwan's thousands of migrant workers, their situation has become even more precarious as Taiwan faces a blue-collar labor shortage as new visas have also been suspended since May.

While with the agreement of their employer workers can transfer companies during their three-year visa, in early June the Ministry of Labor said they can now no longer transfer between kinds of employment, such as from domestic labor or construction to factory work.

It took the ministry another two weeks, however, to release further details in Chinese and another week after that to release information in English, Vietnamese, and Bahasa Indonesian, according to Liao Xin-yi, transnational affairs coordinator at the Taiwan Association for Human Rights. This, she said, leaves many workers "extremely anxious."

Unlike other foreigners, factory workers and domestic workers were also restricted in their movements during Taiwan's latest outbreak as brokers and employers told them they could only leave their dorms or houses for a limited amount of time between work hours -- something done in some cases to cover up cluster infections, said Liao.

While some cases made international headlines earlier this year, it is unknown how many workers were impacted by these restrictions as many declined to report them rather than be blacklisted by employers and brokers, said Riley Tsang, a Fulbright fellow who is interning at the Taiwan International Workers Association as part of their research.