TAIPEI -- While most Taiwanese were focused on the presidential election at the start of the year, many doctors and epidemiologists were picking up on an unusual surge of pneumonia cases in the Chinese city of Wuhan -- the epicenter of the novel coronavirus.

"Right at the start of 2020, all front-line doctors at medical centers received an official alert, following a warning by the Centers of Disease Control asking us to be attentive if we encountered patients with symptoms of cough, fever, sore throat and runny nose," Lin, a pulmonologist at a national medical center in Taipei, told the Nikkei Asian Review. "We had to ask those patients their travel history, occupation and contact history."

In early January, the hospital began asking doctors to wear N-95 respirator masks and proper protective equipment when performing intubation on patients with pneumonia from unknown causes, according to an internal memo obtained by Nikkei.

Lin, who did not want to reveal his full name or workplace, said the hospital that month set up a special zone in the emergency room to treat people with symptoms possibly linked to the virus. In early February, special outpatient clinics were opened in a separate building.

"My personal feeling is that government health officials and hospital directors were all thinking many steps ahead during this global pandemic.... It's much more comfortable than trying to put out fires here and there, and being caught off guard," Lin said.

His experience shows how Taiwan, which lies less than 200 km from China, has so far had many fewer confirmed cases of the novel coronavirus than many other countries. As of Wednesday, Taiwan had reported 379 cases and five deaths from COVID-19, the disease the virus causes. 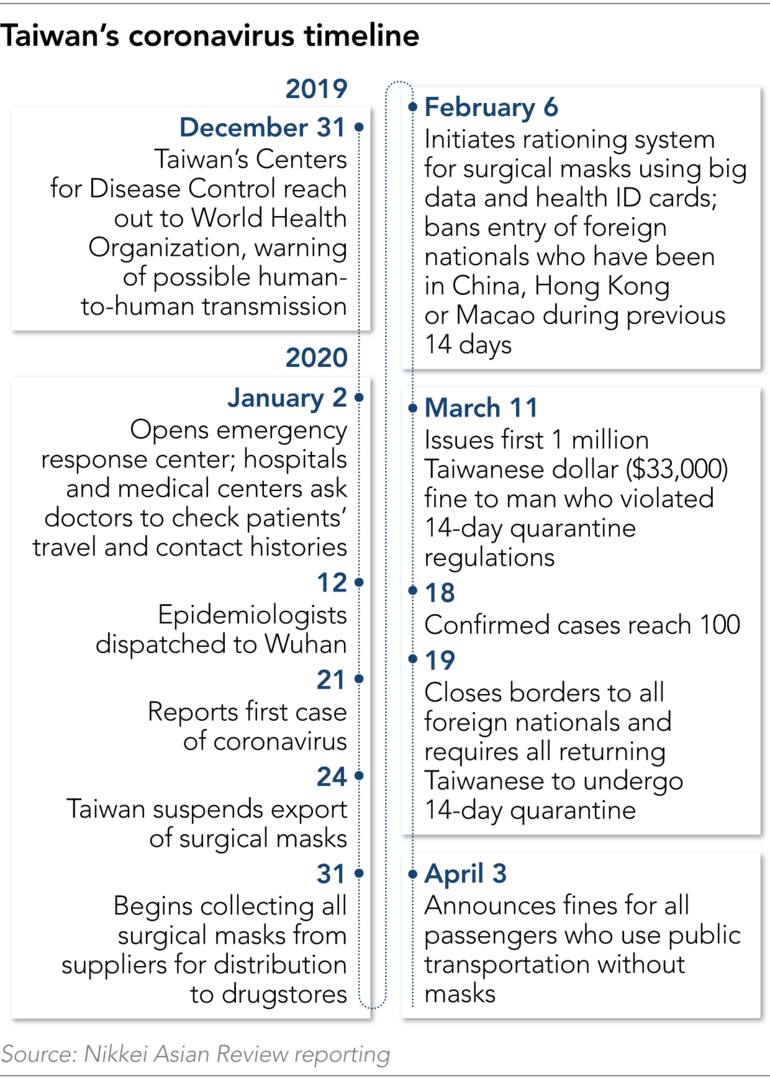 Taiwan's CDC has been on high alert since the end of last year, issuing its first warning to the World Health Organization and alerting the public of a mysterious pneumonia outbreak in China on Dec. 31, weeks before Beijing locked down Wuhan. Officials began boarding planes to screen passengers coming back from the Chinese city for fever. In mid-January, the CDC dispatched two epidemiologists to Wuhan to learn about the virus.

But the WHO, to which Taiwan does not belong to because of China's political influence, ignored the warning from the island.

As early as Feb. 6, Taiwan began barring the entry of Chinese nationals and imposed a mandatory 14-day quarantine for people coming from Hong Kong and Macao. Taiwan closed its borders to foreign nationals on March 19 and demanded that all returning Taiwanese undergo a two-week quarantine.

"April is still a critical moment for Taiwan to contain the coronavirus, after we closed the borders last month, but the epidemic prevention [measures] and people's awareness so far is amazing compared with many other countries," said Tony Chen Hsiu-hsi, an epidemiology expert at National Taiwan University's College of Public Health.

"To effectively contain an epidemic, you need to start early and act promptly so you can buy time. If you wait till the rapid rise of the epidemic to start to lock down places or do interventions, that could be too late and not effective at all because by that time the virus would be everywhere."

Public awareness of the danger of epidemics is higher in Taiwan than in many other places. People wear masks at all times and regularly wash their hands, Chen said. "I call this a culture of disease prevention."

K. Arnold Chan, an epidemiologist and director of the Health Data Research Center at National Taiwan University, said Taiwanese health officials and many in the health care industry have been focused on the unknown pneumonia in China since December.

"The past experiences with SARS [severe acute respiratory syndrome] back in 2003 were still so painful and traumatic to many front-line doctors and nurses that I know," Chan told Nikkei. "Many of those front-line people have become directors at medical centers, so they pass on their experiences to the young front-line workers." 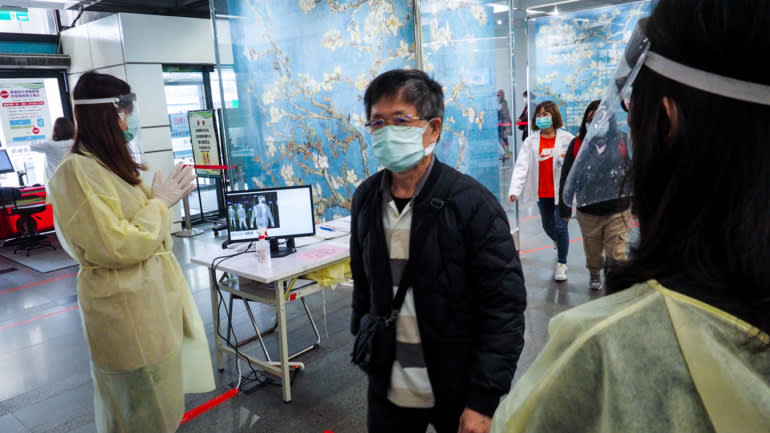 A man has his temperature scanned at a hospital in Taipei, on Feb. 12.   © EPA/ Jiji

The Taiwanese government also made several decisions that later proved wise. On Jan. 24, a day after Beijing locked down Wuhan, Premier Su Tseng-chang blocked exports of surgical masks to conserve supplies, making the island the first place in the world to take such aggressive precautions.

On Jan. 30, Taiwan took another radical step, asking all mask factories to supply products exclusively to the government so that authorities could send them to drugstores daily. On Feb. 6, the government began rationing masks in an attempt to give the public equal access.

The economy ministry brought machine-tool makers together with mask producers and materials manufacturers to expand the island's production capacity from 1.8 million pieces daily in late January to nearly 15 million, as of this week.

"In only 40 days, the local machine tool and parts providers together built an additional 92 pieces of certified mask production equipment," said Hsu Wen-hsien, chairman of the Taiwan Machine Tool & Accessories Builders Association, and founder of Harbor Precision. "We had around 200 top engineers and project managers from 28 companies join this massive program."

While the ministry helped increase the supply of masks, Audrey Tang, Taiwan's digital minister, worked with talent from the technology industry to create digital tools that incorporate big data and people's health ID cards to ensure an even distribution of surgical masks.

Tang, a renowned hacker, programmer and entrepreneur, worked with programmers to create an app that tracks inventories of masks at local drugstores near users. She also improved the National Health Insurance website and its app to allow people to buy masks online and pick them up at convenience stores.

Tang said at a forum in February that many countries have shown interest in building their own digital platforms to give people better access to masks. "We could open our source codes for the site to other countries that need this," Tang said. 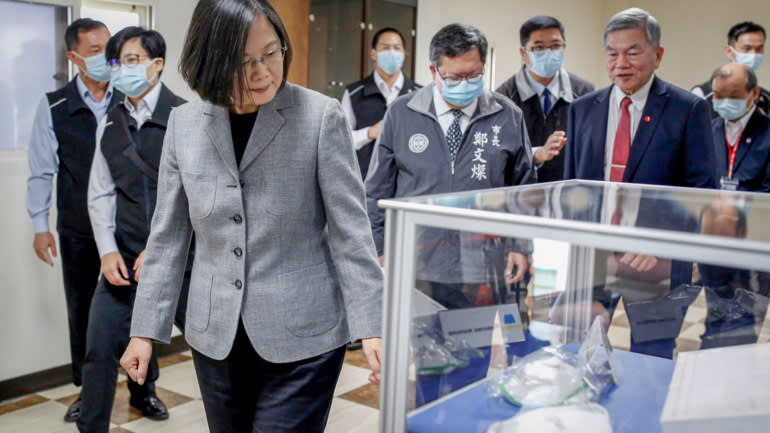 The administration of President Tsai Ing-wen appointed Health Minister Chen Shih-chung as head of the Central Epidemic Command Center. The 66-year-old dentist has become the public face of Taiwan’s epidemic prevention and a rising political star who gives daily livestreamed briefings. He decided the timing on matters such as closing borders and issuing the demand for people to wear masks when taking public transport.

Tsai is using Taiwan's success in dealing with the virus to raise the island's diplomatic profile. "We will donate some 10 million masks to countries that need such medical resources," Tsai said at a news conference in early April. "We are showing the international community that not only can Taiwan help, Taiwan is actually helping."

But the government cannot afford to relax. The risk of community transmission still exists in Taiwan, and the pandemic continues to claim more victims globally. The number of confirmed cases on the island has jumped from 50 to more than 370 in less than four weeks.

"We've seen overly crowded places during the holidays.... It's much more crowded than we had expected. It definitely increases the risk of infections," the head of the Central Epidemic Central Command, Chen Shih-chung, said at a news conference last Monday as he urged people to work from home if they had visited hot spots.

Chen of NTU's Public Health College said the key for Taiwan in minimizing another possible wave of infections in April depends on the public maintaining social distancing -- staying at least 1 meter apart while outdoors and 1 1/2 meters apart when indoors. It also depends on people in quarantine rigorously adhering to the rules.

"What we are doing is trying to buy us more time until a vaccine and effective treatment are found," Chen said.

Lin, the pulmonologist at the Taipei hospital, agreed that the fight is ongoing. "It's too early to say I feel a sense of accomplishment because the battle is still going on and it's actually very intense," Lin said. "We safeguarded against the first wave of infection, but as long as the coronavirus exists, we are exposed to the risks of large unknown infections."