TOKYO -- A Taiwanese app that tracks inventories of face masks is drawing plaudits in Japan and elsewhere -- as is one of the software's developers: Digital Minister Audrey Tang.

Tang, a minister without portfolio in Taiwan's Executive Yuan, is a former internet prodigy who was hired by a major IT company at age 14 and started her own business before she turned 20. She joined the cabinet in 2016.

She was one of the people behind the eMask app that displays data about mask inventories at local drugstores. This helped the government implement a rationing system based on actual conditions on the ground, which alleviated confusion and anxiety over supply.

Many Japanese netizens praised the use of information technology in responding to the crisis, saying Japan should look to Taiwan as an example.

One person wrote on Twitter: "They handled the issue of masks right off the bat." Another said: "the coordination between engineers in the private sector and the government is really impressive."

Panic buying and reselling of masks remains a problem in Japan. Online commentators say things such as "Japan needs talented people like Ms. Tang" and "Japan is getting lapped."

Tang also generated publicity in Japan after she offered a suggestion to improve the Tokyo Metropolitan Government's coronavirus information website. 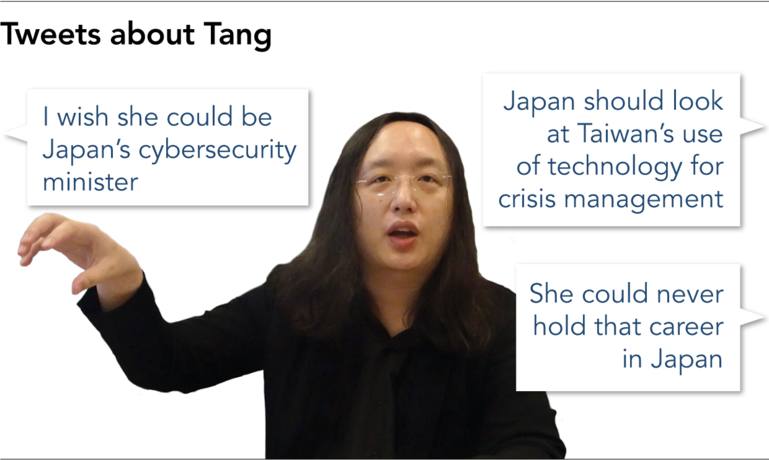 Although she only suggested a change to the Chinese language section, it elicited grateful comments such as: "Isn't it amazing that a sitting minister is taking an interest in the development of other county's websites?"

Tokyo Governor Yuriko Koike took to Twitter to write about the proposed changes.

"Audrey Tang, Taiwan's IT minister also participated in the translation," she said. "We will develop a multilingual version that many people can use."