TAIPEI -- Thirty years ago this week, thousands of students occupied a vast square in their capital to demand democracy from an unpopular Chinese regime. Other members of society joined the protesters, swelling their numbers and increasing pressure on an ossified and out-of-touch government that some feared would resort to violence.

The protests in Tiananmen Square lasted months, ending with untold numbers of deaths and injuries in Beijing and other major cities, followed by what may be the largest censorship campaign in history. By contrast, Taiwan's six-day Wild Lily movement ended with students voluntarily leaving what is now known as Freedom Plaza after negotiating a path to democracy with the president, Lee Teng-hui.

The different paths taken three decades ago by the governments of China and Taiwan are reflected today in their respective responses to the novel coronavirus.

The Chinese Communist Party's obsession with stability led it to suppress information about the initial outbreak in Wuhan, while also detaining doctors who sounded early alarms. Meanwhile, the government of Taiwan, led today by the Democratic Progressive Party -- a young opposition party in 1990 -- responded with an emphasis on transparency and government accountability, keeping confirmed infections down to 59 as of Sunday. 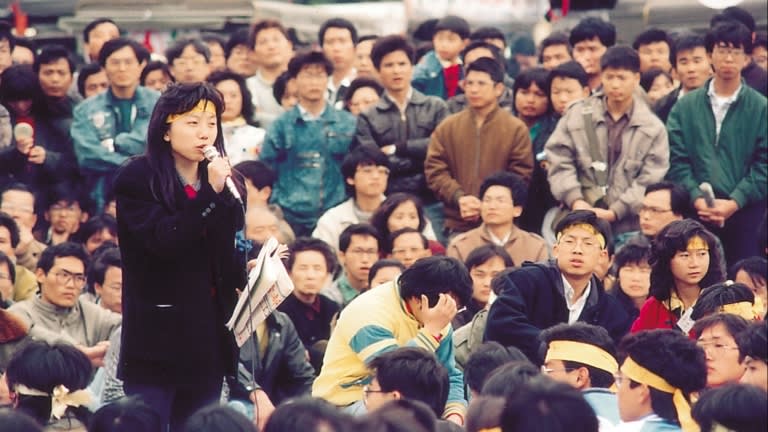 Fan Yun, who was a student at National Taiwan University, addresses the crowd during the Wild Lily protests in Taipei on March 19, 1990. (Photo supplied by Fan Yun)

Taipei's much-praised handling of the outbreak has roots in the Wild Lily movement, which was formative for its thousands of participants, who would go on to influence later generations of Taiwanese activists and leaders.

"It was an era where authoritarian tendencies were lessening rather than growing," said Lev Nachman, a Taipei-based Fulbright scholar focused on social movements. "Of course, the whole point of the movement was to make sure these tendencies were going in a proper democratic direction."

The protests were initiated by National Taiwan University students in reaction to Lee's election as president by 671 of his peers from the Chinese Nationalist Party, or Kuomintang, which three years after ending 38 years of martial law, still monopolized political power in Taiwan. While there is a major disparity in political freedom between Taiwan and China today, that was not the case before Tiananmen.

Students from more than 20 other universities from around Taiwan joined the movement, calling for direct elections for the president and other leaders. At its peak, Wild Lily was an estimated 6,000 students strong. More than 10,000 citizens also joined the protest, encircling and protecting the students.

Among those students was Fan Yun, who was a student at National Taiwan University. Fan, one of the movement's main leaders, was among a 50-plus student delegation selected to meet with President Lee on the first day of his new term as president. Before his less-than-democratic election, Lee had succeeded President Chiang Ching-kuo -- Chiang Kai-shek's son -- in 1988 after his death in office.

The two Chiangs had overseen four decades of imposing Chinese identity upon millions of people on the island. They suppressed a distinct and diverse Taiwanese identity -- stemming from decades of serial colonization -- that included Chinese, Japanese, Hakka and indigenous Austronesian influences.

Hundreds of thousands of protesters fill Beijing's central Tiananmen Square on May 17, 1989.   © Reuters

Lee, a Hakka native of Kaohsiung who was born when Taiwan was still a Japanese colony, was the first Taiwan native to serve as president of the Republic of China -- the government that rebased itself on the island in 1949 after being trounced by Mao's Communist Revolution.

The younger Chiang had selected Lee as his successor, to the dismay of members of the hard line China-centric Palace Faction of the Kuomintang. But the limited numbers of Chinese refugees who fled to Taiwan in the late 1940s meant the party had little choice but to recruit Taiwanese members.

"I really cared about the students," Lee told The New York Times in an interview he granted me at his home in 2018. Lee himself had organized student protests in the 1940s at National Taiwan University, his alma mater. Now in his late 90s, Lee is perhaps one of the most-admired reformers in postwar East Asia.

"President Lee was very welcoming, he wanted to convince us that he had the same values and sought reform," Fan said. "He is a very remarkable person -- he accelerated our democratization."

Nachman said Lee overcame opposition within the Kuomintang, a party that was becoming increasingly frustrated with just how willing Lee was to push for democracy by working with the newly formed opposition DPP and student movements. After meeting with the students in his office on March 21, Lee agreed to one demand -- to hold a national affairs conference that year to discuss how to implement democracy in Taiwan.

Hsin-Hsing Chen, a professor at the Graduate Institute for Social Transformation Studies of Shih-Hsin University, said he came up from his university in Kaohsiung on the second day of the protests.

Chen said that the specter of Tiananmen loomed over the six days of Wild Lily, which voted to disband the day after meeting with Lee.

"We concluded that if the students in Beijing had compromised before June 3, maybe the bloodshed wouldn't have taken place," he said. "We voted again and again and decided to disperse and form a national student union -- and to return if Lee Teng-hui reneged." 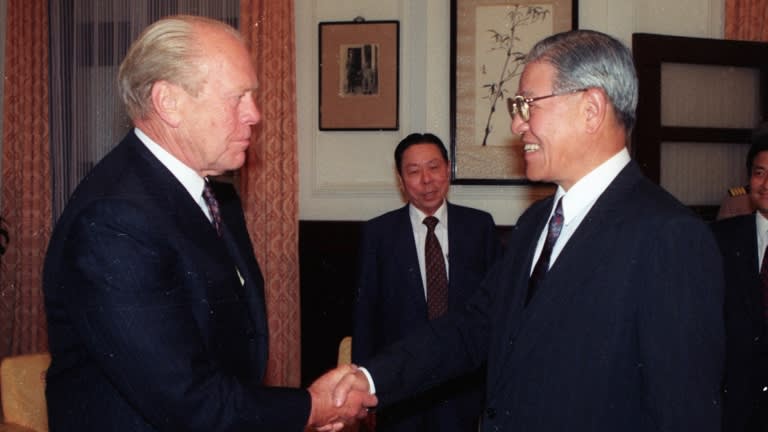 The Wild Lily protesters made a major difference to Taiwan's democratization at the time, but their contributions afterward in nurturing, but not controlling, subsequent protest movements was just as important.

"Many Wild Lily protesters went on to become professors, and they have helped democratize and reshape education in Taiwan, promoting a democratic, liberal intellectual culture here," said Shelley Rigger, a professor of political science at Davidson College.

Others entered politics and government, where they have expressed support for subsequent generations of protesters.

"That's pretty interesting, when you think about it, to have political leaders who identify with and support protesters because they understand their motivations and see themselves in the younger generations," Rigger said.

Fan, herself a former sociology professor, said most of the professors who participated in Wild Lily as students have supported the student movements that bookended the two terms of president Ma Ying-jeou, the only KMT president since Lee.

"If they didn't support the student movements that came afterward, they'd be betraying their own principles," she said.

Those movements focused less on wresting power from the Kuomintang -- now an opposition party in search of direction -- and more on defending Taiwan's hard-earned democracy from the existential threat posed by China's Communist government, which claims Taiwan as its territory, despite never having ruled it.

The Wild Strawberry movement of 2008 protested the arrival of Chen Yunlin, the highest-level Communist official to ever visit Taiwan. The Sunflower Movement of 2014 led to a 23-day occupation of Taiwan's legislature, derailing a trade agreement that would have opened swathes of Taiwan's service sector to Chinese investment.

"I'm grateful we have democracy now, especially seeing what happened in Hong Kong last year," Shih-Hsin University's Chen said, adding that Taiwan's freedoms are the achievement of many people over many generations.

"My generation was just in the right place at the right time."