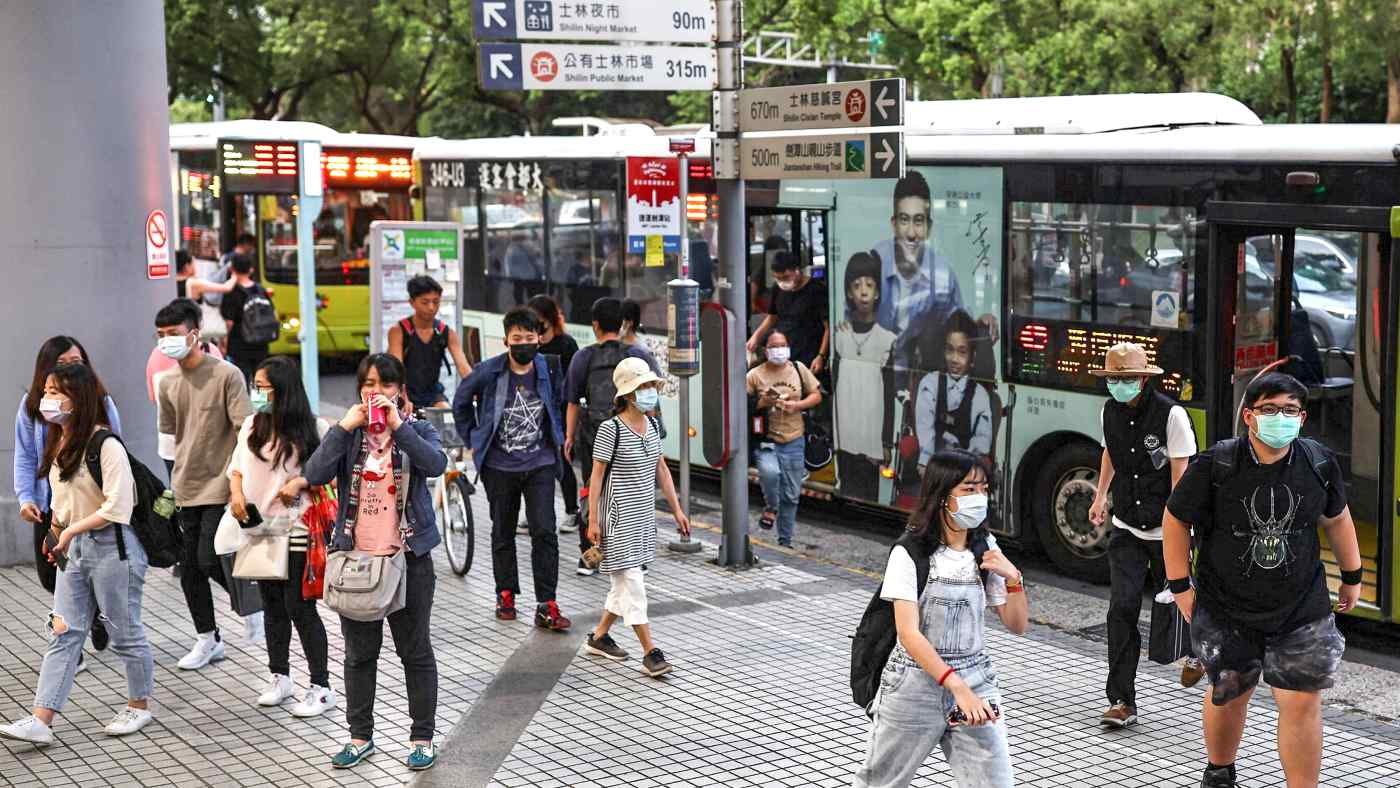 TAIPEI -- Taiwan's government warned Wednesday it is considering imposing its strictest movement restrictions since the onset of the pandemic, triggering the sharpest ever daily fall in the island's stock market.

Health Minister Chen Shih-chung initially said the COVID-19 warning level would be raised to level three of four in the afternoon, before saying it might be issued "in the coming days."

For Taiwan, a role model to the world in its containment of the pandemic, a level three warning means that operations of nonessential businesses will be halted, while activities deemed essential such as order maintenance, government functions and medical services will be allowed to continue. Indoor gatherings of more than five people will be banned, as will outdoor gatherings of more than 10.

The possible escalation of the warning level came after Taiwan reported seven local cases on Tuesday, with the origin of six cases untraceable. The figure rose to 16 -- the highest daily increase in locally confirmed cases -- on Wednesday.

"The Taiwanese people should be very cautious because of the local confirmed cases... We will do whatever we can to counter the virus outbreak," Chen said. "Currently we advise all people to prepare disinfection supplies, which Taiwan has sufficient supplies of and there's no need for panic-buying."

Chen said 11,000 people were vaccinated on Tuesday, bringing the total number of inoculated people to more than 110,000 out of a population of 24 million. The minister did not disclose the inventory level of vaccines across the island, but urged the public to apply for vaccination.

The accumulated number of infections on the island reached 1,231 as of Wednesday with only 12 fatalities. This compares favorably with regional peers such as Japan, which is recording more than 5,000 cases daily, and global hot spots such as India.

Chen later said that high-risk public places should enhance pandemic prevention measures, and should halt operations if they cannot improve such measures. President Tsai Ing-wen urged people not to panic.

The stock market, which had been booming, was stunned by Chen's remarks. It shed more than 1,400 points, or 8%, during trading hours.

Key aviation and shipping stocks such as Eva Air, Evergreen Marine, Wan Hai Lines, and Yangming Marine Transport as well as China Steel, the island's biggest steelmaker, all plunged by the daily limit of 10% in morning trading. State-run airline China Airlines fell more than 9%. Shares of Taiwan Semiconductor Manufacturing Co, the biggest company by market cap, dropped more than 8% at one point.

"I noticed that Taiwan's stock market dropped a lot in trading hours... but Taiwan's economic fundamentals and export numbers are all very good," said Chen.

Semiconductor stocks had been the major driver of the Taiwanese stock market amid a global surge in demand for chips. Shares in TSMC which accounts for more than 30% of the total market capitalization of the exchange -- have more than doubled over the past year.

But the latest cases and government moves risk a further damping of the upward trend.

"We must hold on to the defense line in the communities more than ever when there are unknown origins of local cases. We can't let the efforts of medical personnels go in vain," Tsai said in a Facebook post on Wednesday morning in celebration of International Nurses Day.

Last month, Taiwan recorded a string of infections among China Airlines cockpit crews, leading to more than 30 people contracting the virus. The airliner was ordered to impose strict quarantine on more than 1,200 cockpit crew members, which it said would reduce its cargo capacity by around 10%.