Turkmenistan is now region's last bastion claiming to be coronavirus-free 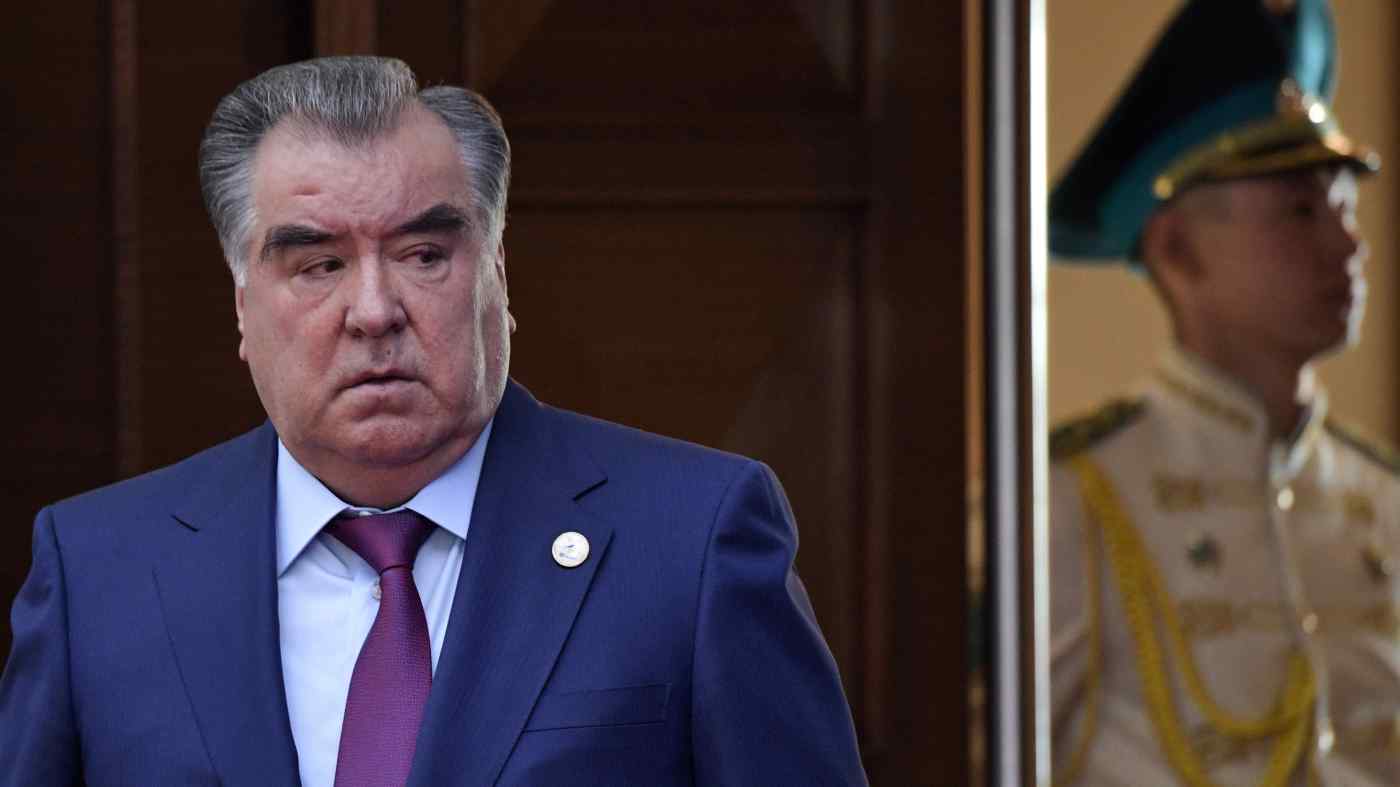 ALMATY, Kazakhstan -- After weeks of maintaining that anything but the coronavirus was behind a spike in deaths from respiratory problems, Tajikistan has finally shifted into COVID-19 crisis mode just as its neighbors tentatively emerge from weeks of lockdown.

Tajikistan on April 30 confirmed that 15 coronavirus infections had been detected the day before, days after the Ministry of Health continued to report a sharp rise in pneumonia cases. The tally has since risen to 461 infections, with 12 deaths, as of early Friday.

On May 5, Health Minister Nasim Olimzoda was replaced, apparently as the government looked for a fall guy for the inadequate response.

Tajikistan has drawn criticism from Central Asia analysts over its reaction to the pandemic, which was detected in neighboring Kyrgyzstan and Uzbekistan in mid-March, and its insistence that it was coronavirus-free.

"I think that so far the government has not proven trustworthy at all," Edward Lemon, a Tajikistan expert from Washington D.C.'s Daniel Morgan Graduate School of National Security, told the Nikkei Asian Review. "It took them a month to finally admit the country had COVID-19, blocking websites and charging journalists who reported on suspected cases and insisting it was 'pneumonia.'"

Tajikistan was slow to introduce measures to prevent the spread of the virus. Mass celebrations to mark Nowruz, the Persian New Year, went ahead in late March. Schools and universities remained open and its soccer season kicked off, albeit behind closed doors, in early April. 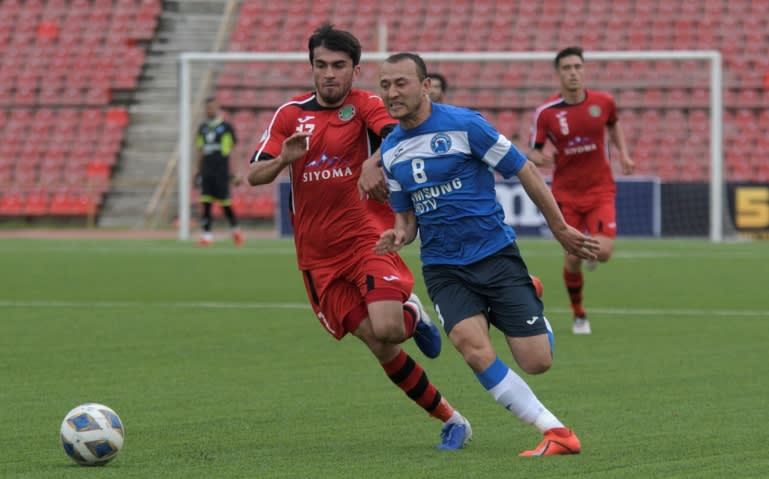 A soccer game in Tajikistan in early April: Matches continued until late in the month, albeit behind closed doors.   © Reuters

While Tajikistan dithered, other countries in the region were quick to impose lockdowns after infections were detected. Now, Kazakhstan, Kyrgyzstan and Uzbekistan are seeing an easing of restrictions, with domestic flights resuming in Kazakhstan and some businesses opening, allowing customers to get a haircut or buy flowers.

Since last week, Tajikistan has shut schools and universities, soccer has come to a halt and gatherings for Ramadan have been banned. Face masks are now obligatory on the streets, but Tajikistan has been reluctant to impose the sweeping closures seen elsewhere.

According to Lemon, Tajikistan is imposing restrictions slowly "to avoid causing panic." But he believes there may be another more self-interested motivation for avoiding total lockdown: "There is genuine concern for the economic repercussions, especially for small businesses and more importantly, those businesses controlled by the president's powerful family."

Vast swaths of the Tajik economy are owned by President Emomali Rahmon's offspring -- he has two sons and seven daughters -- and his cronies. "A lockdown would negatively affect these [businesses] and reduce the income for the ruling family," Lemon said.

Economic difficulties lie ahead for this mountainous, landlocked country, with lower demand for exports from key trade partners such as Russia and China and remittances from abroad declining. Last year, there were around 500,000 Tajik migrants working in Russia, but many of them are now stuck in Tajikistan.

Their remittances accounted for an estimated one-third of gross domestic product and were a driver of local consumption. This money drying up will also strain public finances at a time when cash is needed to combat the coronavirus. According to official data, Tajikistan's real GDP grew by 7.5% last year, but the International Monetary Fund estimates the rate could fall to just 1% this year.

The IMF this week approved a $189.5 million disbursement "to help Tajikistan meet urgent balance of payments and fiscal needs stemming from the COVID-19 pandemic."

Tajikistan is not alone in facing a slowdown. Kyrgyzstan, also dependent on exports and remittances, has been hit hard. The IMF is forecasting a 4% drop in GDP in 2020, after a 4.5% increase in 2019. To ease its financial plight, Kyrgyzstan is in talks with the Export-Import Bank of China for debt relief on the $1.7 billion it owes on loans related to Beijing's Belt and Road Initiative. Kyrgyz soldiers wear face masks while performing a changing of the guard ceremony in Bishkek, the capital, in April.   © Reuters

In Central Asia's two biggest economies, Kazakhstan and Uzbekistan, the pandemic fallout has seen a decrease in prices and demand for their fossil fuels. Kazakhstan has reported a 20% to 25% drop in gas exports to China and is bracing for its first negative GDP growth since 1998 this year. The IMF is forecasting a 2.5% contraction, while the government is predicting a 1.8% decline.

Uzbekistan is still anticipating growth, albeit much slower than in recent years: The government predicts a 2.1% increase in GDP, while the less-optimistic IMF sees a rise of 1.8%. Foreign trade decreased in the first quarter of 2020, down 10.2% compared with 2019. China slipped into second place behind Russia as Uzbekistan's biggest trade partner for the first time in recent years as trade with Beijing fell 26.8%.

The Asian Development Bank put out a statement this week calling on Central Asian countries to adopt a "forward-looking, regional approach" to the crisis, stressing that the "top priority is to strengthen regional health security." The lender offered a number of recommendations for not only responding to COVID-19 but also future health threats, such as data sharing and improving access to medical care -- including for migrant workers.

Meanwhile, Turkmenistan is Central Asia's last bastion holding out against COVID-19, maintaining that it remains free of infections. With no independent verification of this, international groups such as the World Health Organization depend on the information the government gives them.

"We rely on the health authorities of Turkmenistan to inform us of confirmed cases, and up to now we have not been notified of such cases," Paulina Karwowska, head of the WHO Country Office in Turkmenistan, told RIA Novosti on April 27.

The country may officially have no novel coronavirus cases, but it is not immune to the economic shockwaves. With falling demand for its oil and gas, the IMF predicts that GDP growth will drop to 1.8%, down from 6.3% in 2019 -- though the government will no doubt keep posting its usual rosy figures.

Turkmenistan blithely continues with mass gatherings, potentially creating a nightmare scenario for public health. While this secretive state's President Gurbanguly Berdymukhamedov has recently been seen social distancing while performing his sporting feats, the precautious have not reached the public.

In late April, crowds turned out for a weekend of horse racing, show jumping and an equine beauty contest. Even the United Nations pressed ahead with plans to mark its 75th anniversary at a university. Photos posted on Twitter showed students packed into an auditorium with no face masks in sight.