OSAKA -- As nations scramble to develop vaccines for the coronavirus, Takara Bio is at the forefront of Japan's efforts, tapping its four decades of gene-editing experience to help develop a DNA-based approach that has never been used in humans before.

The pharmaceutical maker is in a unique position during the pandemic: It is not only Asia's largest supplier of the reagents used in testing for the virus, but also is in the forefront of developing a DNA vaccine that could be put into mass production quickly to meet demand.

The pandemic put a spotlight on Takara Bio in February after an urgent request by China to boost production of reagents used in PCR, or polymerase chain reaction, tests. In response, the company expanded the capacity of its operations there.

When it comes to a vaccine, Takara is teaming with Osaka University and Japanese biotech company AnGes.

Their vaccine candidate is set to enter a clinical trial phase in July. The developers expect to produce 200,000 doses by the end of this year, should the approval process go smoothly, for clinical use by early 2021.

"There's risk in releasing [a DNA vaccine product] in a short period," a vaccine researcher said. "It takes time to examine side effects."

The team's DNA vaccine candidate for COVID-19 sends part of the genetic information of the coronavirus into a human, causing the body's cells to produce a virus protein. The protein is recognized by the immune system as foreign, priming it to attack the real virus if it infects the body. But unlike conventional vaccines, this method does not require culturing the virus in chicken eggs, so production can be ramped up in only about two weeks.

Takara's gene editing technology makes this possible. The company is strong in producing large amounts of DNA and in the so-called vectors that transport it into human cells.

Takara, which has equipment for culturing reagents and viral vectors, takes on orders for manufacturing pharmaceuticals from drugmakers and universities. A U.S. subsidiary of Tokyo glass maker AGC manufactures vaccine materials for Takara.

That technology was why Ryuichi Morishita, an Osaka University professor and a leading gene drug expert, wasted no time in getting Takara involved in the vaccine development project.

Takara Bio President and CEO Koichi Nakao said the DNA vaccine candidate "can be mass-produced without a problem if we apply the technology we've developed over the years."

Takara Bio traces its origin to a biotech division of what is now the Takara Holdings group in Kyoto. The company, which began gene editing in 1979, reached a milestone in 1988 when it acquired exclusive distribution rights for a gene amplification system using the PCR method.

Takara currently ships the products to Europe, the U.S. and Japan, and has increased output of all its reagent products, including those for PCR. The company also awaits approval by Japan's health ministry for its plan to market a PCR testing reagent that uses saliva as a sample.

Takara's reagent sales top 20 billion yen ($185 million), representing about two-thirds of its total sales and making the company the largest supplier in Asia. The company's stock price has climbed about 30% since the start of the year.

British research company Pharma Intelligence estimates the global vaccine market at $40 billion. This promising market carries an annual growth rate of 10%, even without the impact of the coronavirus pandemic.

Though Takara now is focused on developing PCR reagents and the coronavirus vaccine candidate, the company looks to "graduate into a drug discovery" business by taking advantage of the gene editing technology, Nakao said. 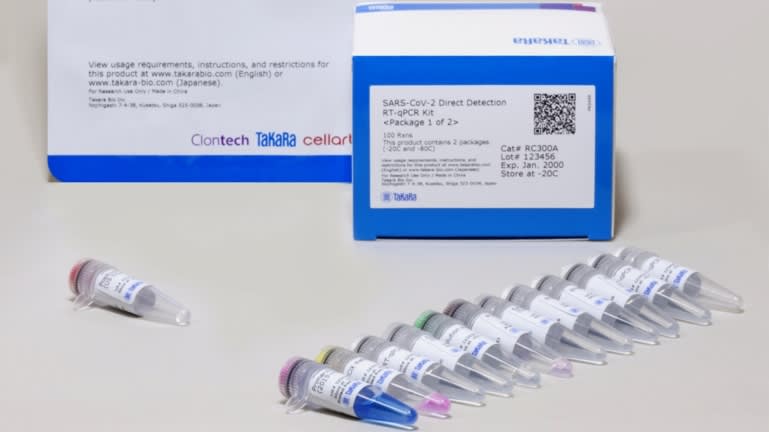 He aims to boost profitability by expanding operations beyond the company's background roles in testing and manufacturing.

Takara has developed a gene therapy drug with Tokyo's Otsuka Pharmaceutical and intends to file for a government license by the end of March 2021. The drug uses lymphocytes in the patient to attack synovioma, a type of cancer.

Pharmaceutical industry insiders speculate that the product, if approved, would be priced at over 10 million yen in Japan's standard drug system.

Takara's long-term business plan announced May 14 targets operating profit of 10 billion yen and revenue of 50 billion yen by March 2026. This represents a 60% rise in profit and a 45% gain in revenue from the year ended March 2020.

Breaking out as a drug discovery company will be a challenge. Takara last year withdrew an application for a manufacturing and sales license covering a new drug it had developed.

The world's pharmaceutical giants are racing to develop vaccines for the new coronavirus, with many of these companies from outside Japan bolstered by government support.

The World Health Organization said Friday that 10 COVID-19 vaccine candidates globally are undergoing clinical tests. Six of them are in China, where development is led by labs and biotech companies closely associated with the government.