BANGKOK -- Thai law-enforcement officials are considering early parole as a way to stem the COVID-19 outbreaks in the country's notoriously jam-packed prisons if current rapid inoculation efforts fail to control the situation, but it is not known if last year's pro-democracy protesters and other political prisoners will be given access to any such program.

Along with construction worker campsites and factories, Thai prisons are giving rise to viral clusters as a third wave of the pandemic roils the country. Of 107,563 cases reported since March 23, 16,153, or 15%, are among convicts and pretrial detainees. 882 inmates tested positive on Tuesday.

"Prisons are overcrowded, so there are limitations to hygiene and disease control efforts," Aryut Sinthoppan, director-general of the Corrections Department, said on May 17, the day Thailand set a record high for new infections at 9,635 -- 6,853 of which were among detainees.

The World Prison Brief, an online database, says that as of April 1, Thai prisons were holding 307,910 prisoners. The Thai prison system's official capacity was 110,000 as of December 2018.

The department is trying to contain the issue by launching a vaccination program. On Friday, Minburi Remand Prison in eastern Bangkok started inoculating its 3,831 inmates. Sinovac vaccines are being applied to those younger than 60, while inmates over 60 and/or with chronic diseases will receive an AstraZeneca jab. The first doses are to be completed within a week.

Simultaneously, the Corrections Department is considering giving inmates early parole or offering them reduced sentences to tame the chronic overcrowding. Certain rules will have to be amended before such a measure can be acted on, according to Aryut. 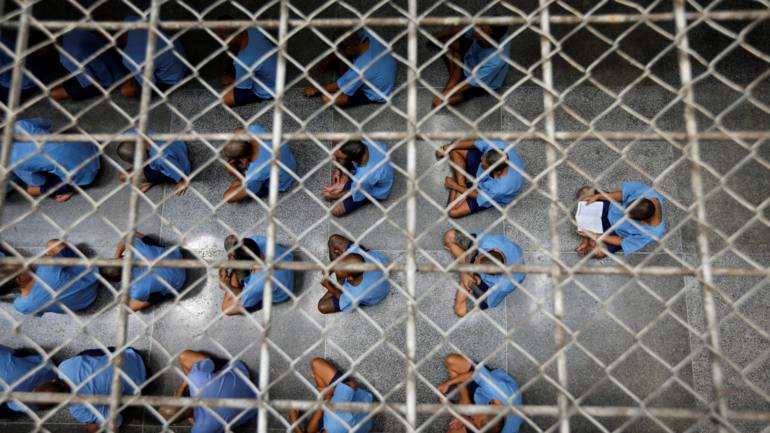 The measures, however, could have been taken earlier and perhaps prevented the outbreaks. Rights groups over a year ago warned that the correctional facilities were facing serious pandemic risks.

In April 2020, 11 international regional and domestic human rights organizations sent a joint open letter to the Corrections Department asking that it ensure the health and safety of inmates throughout the pandemic. "The COVID-19 pandemic provides an opportunity to immediately begin addressing the long-standing issue of overcrowding in places of detention in Thailand," the letter says.

"This is the first time that the government has responded to the request," said Sunai Phasuk, Thailand senior researcher at Human Rights Watch. "We are waiting to see which inmates, including political detainees, will be eligible."

The letter suggests detainees awaiting trial for nonserious and/or nonviolent offenses as well as those detained without sufficient legal basis should be prioritized for early parole. Despite the calls, Aryut said the special parole and sentence reduction program should be limited mainly to old prisoners and those with life-threatening diseases.

The public is not showing strong concerns about prisoners being released. "I am not worried because I believe that those considered should be moral inmates whose remaining sentences are short," said a self-employed worker nicknamed Jo. The bigger issue for the 59-year-old is how Prime Minister Prayuth Chan-ocha's administration has spent budget money.

"I have been curious to know for a long time why they don't build more prisons, while they spent 12 billion baht ($380 million) to build the new parliament," he said. "No one has given me an answer."

Prayuth has been in power for seven years now, since staging a coup in May 2014.

The outbreaks in Thai prisons were brought to light in late April when a prodemocracy activist in pretrial detention sounded a warning through his supporters. According to detained human rights lawyer Arnon Nampha, who has been charged under Thailand's lese-majeste and other laws, 25 inmates in his wing at Bangkok Remand Prison had tested positive.

His supporters on April 30 posted the report on Facebook. On May 6, the Corrections Department confirmed that Arnon had contracted the virus. It then took until May 13 for the department to engage in active case finding and start reporting that the virus had infected large numbers of inmates.

"There is definitely no cover-up," said Minister of Justice Somsak Thepsutin. Government officials have blamed a lack of kits and staff to test inmates for the delay in reporting the issue.