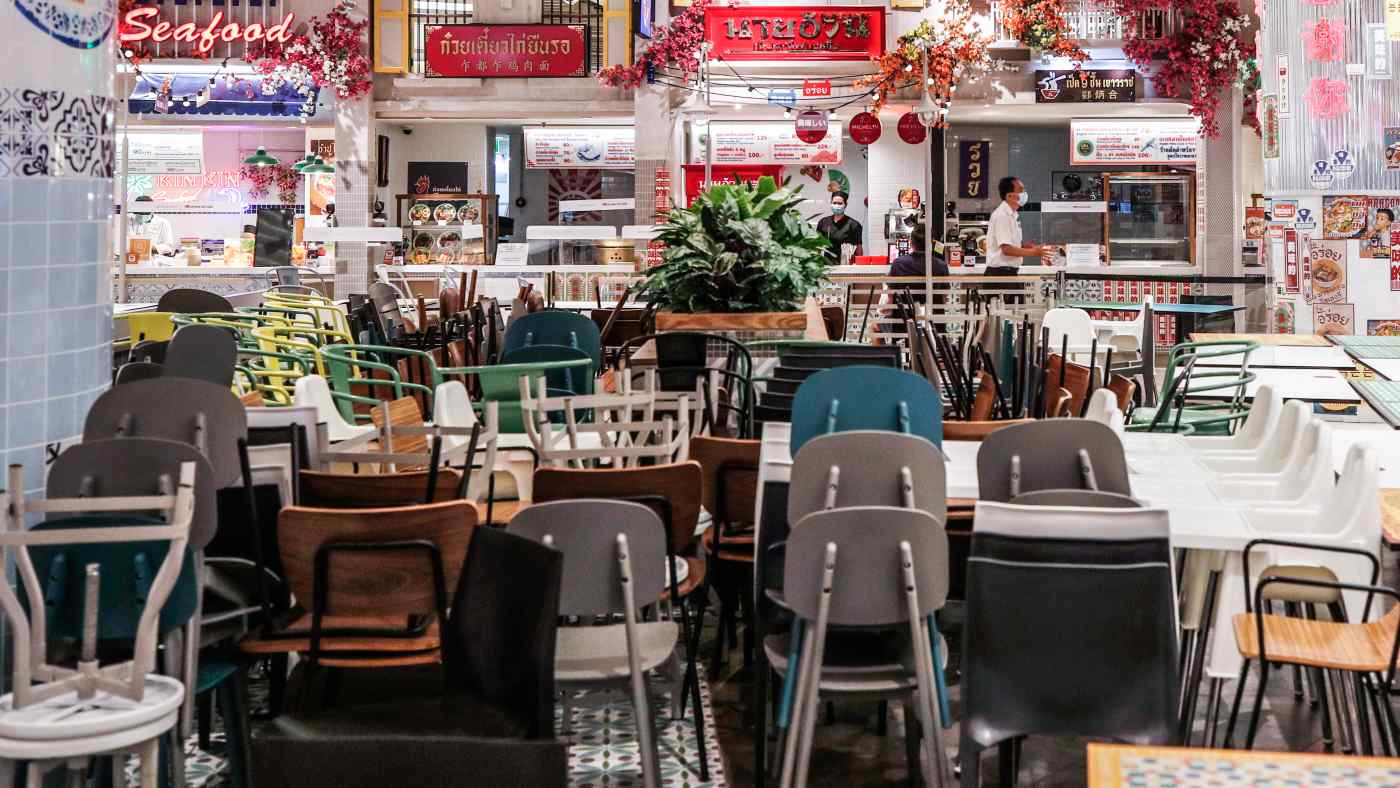 Thailand's restaurants are closed to diners until further notice but home deliveries and takeaways are an option in most places.    © EPA/Jiji
YOHEI MURAMATSU and TOMOYA ONISHI, Nikkei staff writersMay 11, 2021 14:07 JST | Southeast Asia
CopyCopied

BANGKOK/HANOI -- Thailand, Vietnam and Cambodia -- all early COVID success stories -- are now using an iron fist on their residents in bids to halt the spread of more virulent variants.

Thailand on May 1 issued a nationwide mask mandate and banned dining in restaurants in Bangkok and elsewhere. The first local transmissions of the U.K. variant were confirmed in early April.

By late that month, the country had counted about 65,000 total COVID-19 cases, more than twice the number reported a month earlier.

Other powers Prayuth assumed come from laws on security, cybercrime and other matters. Prayuth is the former army chief who staged Thailand's most recent coup, in May 2014, and who has held on to power with a new constitution that guarantees the military nearly all of the senate's 250 seats.

Now the opposition is accusing Prayuth of establishing a dictatorship in the name of combating COVID-19.

In Vietnam, after confirming local transmissions of the Indian variant, the government on Wednesday decided to extend the mandatory quarantine period to 21 days from 14 for anyone arriving in the country. Deputy Prime Minister Vu Duc Dam, meanwhile, has urged citizens living overseas not to return, fearing they might carry variants with them.

The first local transmissions in more than a month were detected on April 29. After one case was identified, Hanoi, the capital, ordered that karaoke parlors and bars be closed, big events canceled and that masks be worn in public places. Violators are subject to penalties.

Why are countries that had successfully halted the virus's spread now being inundated with new cases? Migrants who freely but illegally go back and forth across borders are receiving much of the blame.

The Vietnamese government said that about 85% of COVID-19 patients who had entered from Cambodia tested positive for the U.K. variant.

Malaysia on Monday announced a fresh nationwide lockdown based on several factors, including the existence of new variants. The lockdown is to last until June 7 but is subject to an extension.

In Cambodia, the capital Phnom Penh and nearby Takmao on April 15 ordered citywide lockdowns. The measures came about two months after viral clusters hit Phnom Penh, then spread across the nation.

Before late February, the country counted only 500 cumulative cases. By late April, however, that number had topped 10,000.

It is believed that Chinese workers who had disregarded quarantine orders and left their designated facilities triggered the spread.

Now Cambodia's government is deporting foreigners who violate quarantines and is not allowing them to reenter.

The government is also penalizing Cambodians who violate stay-at-home orders. In addition, it has ordered more than 200 garment factories -- the country's key employer -- to temporarily halt production.