Vietnam gears up to produce Russia's Sputnik vaccine next month BANGKOK/HO CHI MINH CITY -- Thailand on Monday became the latest country to begin mass inoculations against COVID-19, a crucial step toward being able to revive an economy that lost its main drivers more than a year ago.

"Today is the start of nationwide vaccinations," Prime Minister Prayuth Chan-ocha said at a kickoff event at Bang Sue Grand Station, a new commuter train hub in the capital that has been turned into a makeshift inoculation site. "No matter where you register, everyone will definitely be inoculated. Vaccines will continue to come in."

Elsewhere in Bangkok, large malls like Central World, Siam Paragon and Iconsiam have arranged to provide space where nearby residents can be vaccinated. Hospitals are collaborating in the effort.

As it begins its inoculation drive, Thailand finds itself in a race with its Southeast Asian peers for vaccines. Tiny Singapore has had some early success but faces difficulty in convincing seniors that the shots are safe. Malaysia, the Philippines and Vietnam hope to follow Thailand but are finding supplies hard to come by. Vietnam has asked the business community to help secure supplies.

Amid the struggle to obtain the scarce supplies that would allow them to reach herd immunity, these countries are also battling a new wave of infections.

In Thailand, the AstraZeneca vaccine will play the leading role. On Friday, the Ministry of Public Health received 1.8 million doses of the vaccine -- the first batch produced under license by Siam Bioscience, owned by King Maha Vajiralongkorn.

A local entity of AstraZeneca will gradually deliver a total of 6 million doses through June. The company did not specify if all of the supplies will come from the local partner.

"The allocation of vaccines depends on the number of vaccines that come in each period," said Kiattipoom Wongrachit, permanent secretary of the Public Health ministry. "They would be allocated in consideration of the vaccine-to-population ratio and the severity of the outbreak situation."

Thailand began selective vaccinations at the end of February, when Public Health Minister Anutin Charnvirakul became the first Thailand resident to receive the Sinovac vaccine. A few weeks later, Prayuth received an AstraZeneca jab. Apart from ministers, health care professionals and other essential workers have been prioritized for shots. As of Saturday, 2.8 million of Thailand's 70 million residents, including foreigners, had received their first injection, and 1.3 million had completed their two-shot course. Thailand intends to vaccinate 70% of its residents by the end of the year.

All along Siam Bioscience planned to begin delivering vaccine batches in May or June. While it has managed to keep to its schedule, the government has allowed the virus to spin into dangerous territory.

The kingdom is suffering from its third coronavirus wave. Between March 23 and Sunday, 149,591 people were found to have contracted the virus. This accounts for 84% of the cases confirmed in the country since the dawn of the pandemic. Prisons, construction worker campsites and factories have recently given rise to clusters.

The Thai government has reserved 61 million doses of the AstraZeneca vaccine. In addition, it has received 6 million Sinovac jabs. This is not enough for the country to achieve herd immunity, so it is approving different vaccines as it tries to scrape together as many supplies as possible.

Apart from AstraZeneca and Sinovac, Thailand has approved vaccines from Johnson & Johnson, Moderna, and China's Sinopharm. Russia's Sputnik V and India's Covaxin are being registered at the country's Food and Drug Administration.

Inoculating residents is a crucial step in moving the Thai economy, which shrank 6.1% in 2020, toward recovery. Recent outbreaks have prompted some provinces to send out closure orders to schools as well as businesses like bars, spas and cinemas.

Beginning in July, Thailand is scheduled to allow vaccinated foreign travelers to stay in Phuket without a quarantine period. If this "sandbox experiment" succeeds, the government intends to begin accepting vaccinated international visitors at other destinations, including Bangkok, Chiang Mai, Pattaya and Krabi. Beginning in 2022, plans are to allow vaccinated tourists to freely move around the country.

A high inoculation rate will make it easier to reopen businesses and borders. 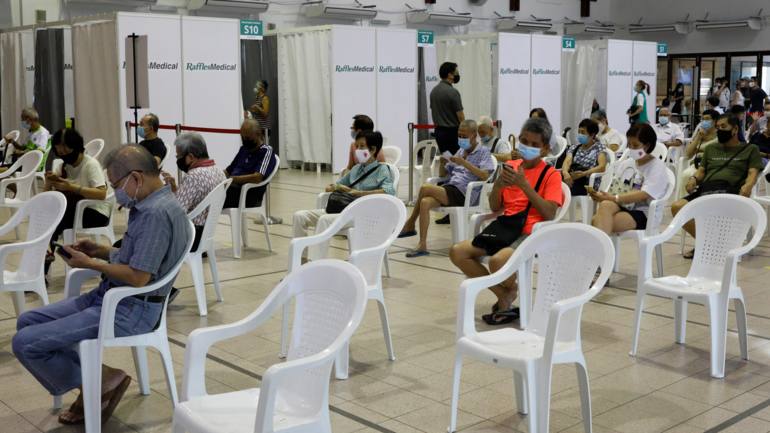 Singaporeans older than 70 wait in an observation area after receiving vaccine injections. The city has fully vaccinated 31% of its population. (File photo by Reuters)

Southeast Asian nation's inoculation rates depend on their ability to secure jabs. Singapore is the region's most vaccinated nation. As of May 31, about 40% of its total population (2.28 million of 5.7 million) had received at least one shot, and 31% had been fully vaccinated, according to the health ministry.

Singapore's government has not detailed how many injections it has secured, but Prime Minister Lee Hsien Loong on May 31 said it had received "further confirmation of faster vaccine deliveries over the next two months."

The government now expects to administer at least one dose for all eligible residents by early August. The government uses the Pfizer-BioNTech and Moderna vaccines, and has set up 40 inoculation centers nationwide. Residents use the internet to book appointments.

Singapore started vaccinating health care workers in December, then older age groups. Most shots are now being administered to residents age 40 to 44 as well as to students.

A significant portion of the elderly, however, has not received jabs. According to the government, 27% of people older than 60 have not made appointments, due to safety concerns, technical difficulties or other issues. The government now allows walk-in service at vaccination centers to encourage the elderly to get vaccinated.

Malaysia, which began its vaccination process in February, is currently performing 100,000 injections a day. As of Friday, some 2.29 million people had received jabs, with 1.13 million completing their two-shot course. The country, which has been under a tough nationwide lockdown since Tuesday due to a resurgence driven by more virulent variants, has a population of nearly 32 million. Previously, the country blamed its low vaccination rate on slow deliveries and unavailability as the countries producing vaccines hoarded supplies. Vaccines from Pfizer-BioNTech, China's Sinovac and AstraZeneca are currently in circulation.

The government aims to be inoculating 200,000 people a day by end of next month and is targeting the end of the year to reach herd immunity.

The Philippines on Monday started vaccinating its working-age population as it anticipates receiving additional supplies.

Manila expects to receive 10 million doses from different suppliers this month, vaccine czar Carlito Galvez said last week, adding to the 8.3 million doses the country of 108 million had as of end-May.

The vaccination of workers -- the fourth category in an inoculation program that prioritized medical staff, the elderly and people with comorbidities -- comes as the government seeks to further open the economy and exit what last year became the worst recession in Southeast Asia.

The Philippines at the end of May had administered over 5 million doses, and 1.2 million people had received their second shots. It aims to administer 4 million to 5 million more doses this month.

Vietnam lags its regional peers on the vaccination front, partly due to a supply shortage, and now finds itself in a race to secure additional supplies as India, fighting a devastating outbreak, has halted vaccine exports.

Vietnam had been seen as one of the best in the world in containing the virus. But the industrial hub of Bac Giang and Bac Ninh provinces is now experiencing cluster infections.

The government, which hopes to avoid supply chain disruptions, is now prioritizing workers when it comes to vaccine shots.

The government intends to obtain 150 million doses and to vaccinate around 75% of its population of about 96.4 million.

But as of Sunday, the government had secured only 2.9 million doses. The country's political leaders are now encouraging the business community to obtain supplies and vaccinate workers.

"Vietnam's vaccine sources completely depend on the manufacturers," deputy health minister Truong Quoc Cuong said. "Vietnam is not in the group prioritized for vaccine supplies."

Hanoi has approved the AstraZeneca and Sputnik vaccines, and on June 3 added the Sinopharm vaccine to its list for emergency use.

Hanoi is also negotiating to produce Russia's Sputnik vaccine in Vietnam, starting next month. In the deal, Vietnam's Vabiotech would be expected to produce 5 million doses a month.