Thailand locks down Greater Bangkok as delta rips through ASEAN 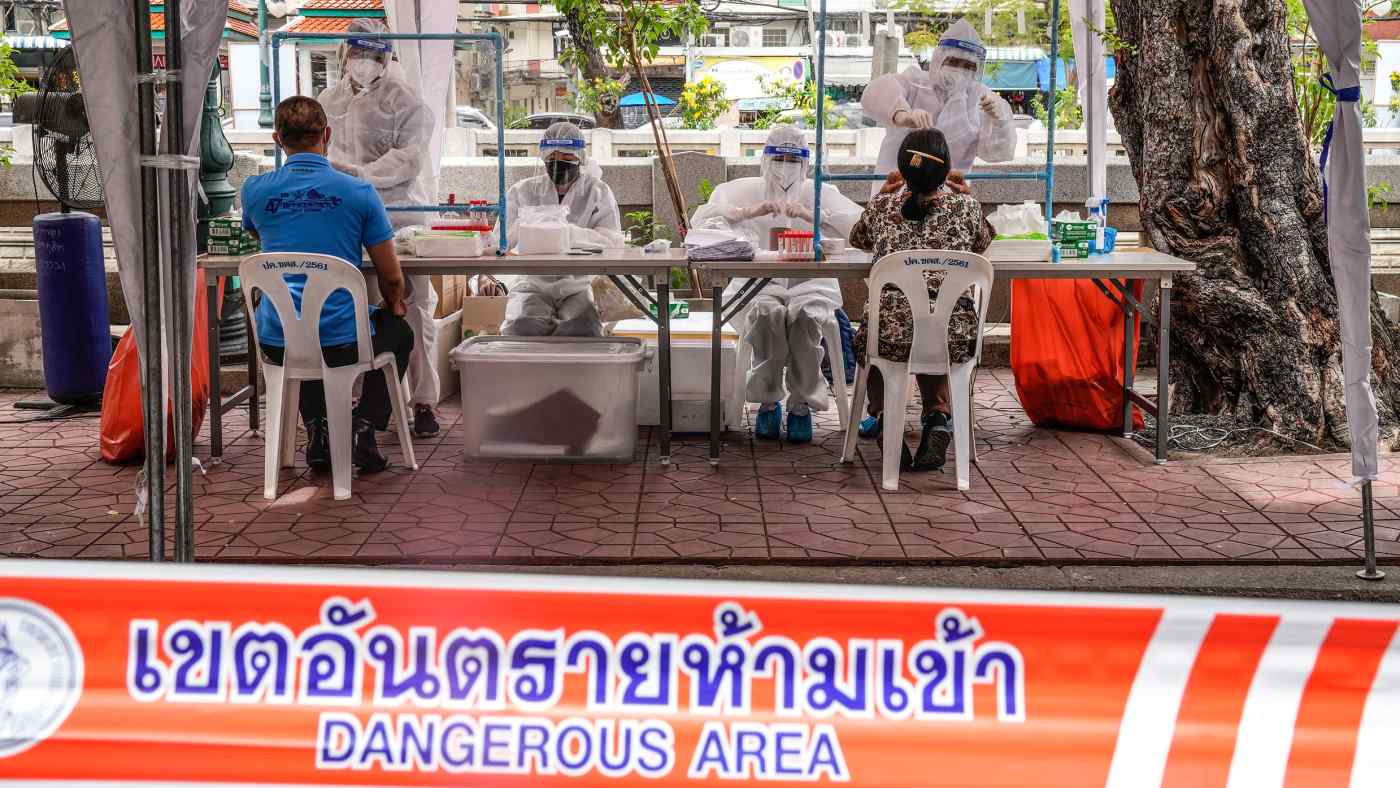 BANGKOK -- Thailand on Friday decided to implement a stringent lockdown of Greater Bangkok as it struggles to contain its third and deadliest COVID wave, one driven by the same delta variant that is wreaking havoc across Southeast Asia.

The 14-day lockdown starts Monday and is aimed at lessening person-to-person contact. Bangkok and the surrounding provinces of Nakhon Pathom, Nonthaburi, Pathum Thani, Samut Prakan and Samut Sakhon will be subject to the strict measures.

Restaurants, markets and convenience stores will be barred from operating from 8 p.m. to 4 a.m. Public transit will cease operating from 9 p.m. to 3 a.m. Spas, beauty centers and massage parlors are not allowed to operate.

Shopping malls will close except for certain essential tenants such as supermarkets, banks, pharmacies, and eateries. Public parks will close at 8 p.m.

As many private and public sector workers as possible will be encouraged to work from home.

Although the strict measures only apply to the six provinces, the government has declared four provinces in southern Thailand to be maximum control zones where residents will be asked to avoid making unnecessary trips. Curfews will be in place from 9 p.m. to 4 a.m. Gatherings of more than five people will be discouraged.

Authorities on Saturday will start setting up checkpoints to minimize interprovincial travel.

The measures came out of an urgent online meeting of the Thai government's Center for COVID-19 Situation Administration, chaired by Prime Minister Prayuth Chan-ocha. The meeting likely had a heated debate because the COVID daily briefing by the center's spokesperson was given three and a half hours later than usual.

The government aims to tame the number of daily cases in two to four weeks. 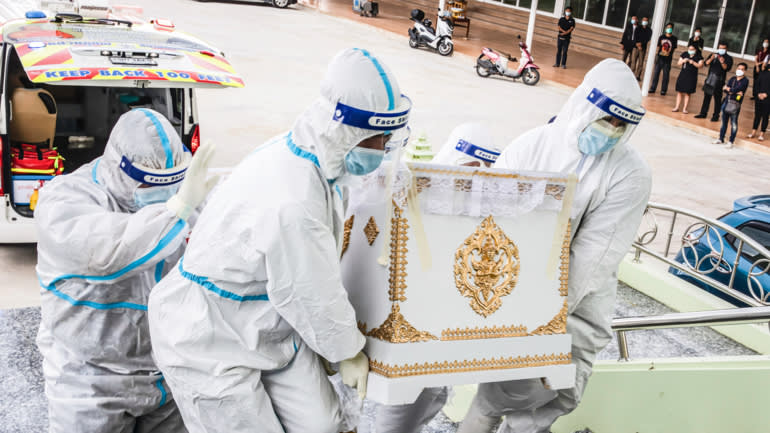 Siam Nonthaburi Foundation staff and volunteers carry a coffin that holds a COVID victim to a crematorium in Rat Prakongthum Temple, Nonthaburi.   © AP

It also reported 72 deaths on Friday.

The outbreaks are mainly hitting Bangkok and its surrounding provinces. The southern provinces of Narathiwat, Songkhla, Pattani and Yala, close to the border with Malaysia, have also been reporting many daily cases. Chonburi Province, where the tourist city of Pattaya is located, has found outbreaks as well.

The new measures are stricter than those reportedly submitted by the Ministry of Public Health. The original proposal included limiting travel between provinces and encouraging companies to offer work-from-home options to as many employees as possible. Another measure was to shorten the operating hours of shops and public transit systems.

The delta variant appeared in India, crippled its response to the pandemic and is now crushing Indonesia, where daily cases are approaching 40,000.

Other ASEAN nations are also struggling. Malaysia on Thursday confirmed 8,868 cases -- close to its all-time daily high of 9,020, recorded on May 29. It also counted 135 deaths.

Vietnam, meanwhile, may follow Thailand in applying lockdowns. The central government, in Hanoi, sent a document to authorities in Ho Chi Minh City and nearby provinces to be more aggressive in battling the virus, recommending that they implement lockdowns as a wave of infections sweeps through the country's southern commercial hub.

In Thailand, the delta variant is gradually taking over the alpha mutation as the main strain. According to a study conducted by a health ministry department, the variant showed up in 32.2% of 2,238 samples taken from June 28 to July 2, nearly double the 16.6% recorded from June 21 to June 27.

In Bangkok, the epicenter of the country's recent outbreaks, the proportion of the delta variant is up to 52%, surpassing the alpha at 47.8%. The results are consistent with earlier warnings voiced by a Thai virus expert. Medical professor Yong Poovorawan of Chulalongkorn University on Saturday posted on his Facebook page that 70% of COVID-19 patients in Bangkok had delta infections, according to his own sampling of over 700 cases.

It was a follow-up post of sorts; on June 23 he wrote that delta infections would rise in the next three to four months.

Yong warned that vaccines administered in Thailand offer less protection from the delta variant. Of 11.6 million shots administered by Thursday, 6.7 million had been Sinovac jabs, with 4.7 million coming from AstraZeneca makers.

The wide epidemic in Sinovac-dependent Indonesia has posed questions regarding that vaccine's efficacy.

But Thailand has another problem: Its population of roughly 70 million is largely undervaccinated.

The delta surge is also worsening a hospital bed shortage. Thailand has been prompted to convert airport terminals into field hospitals. Some 5,000 beds will be set up in a newly built terminal at Suvarnabhumi Airport, Bangkok's main gateway. The beds are expected to be ready in August. A cargo terminal at Don Mueang International Airport, Bangkok's budget gateway, will be used to accommodate roughly 2,000 mild or asymptomatic patients. Those beds are to be ready on Monday.

Lockdowns inevitably hurt economies. From late March 2020, curfews and other strong restrictions were imposed in Greater Bangkok, then gradually lifted over a few months. In the second quarter of 2020, Thailand's economy shrank 12.1% from the year-earlier period, leading to 6.1% negative growth for all of 2020.

Thailand's economic planning agency, the National Economic and Social Development Council, projected in May that Southeast Asia's second largest economy would grow by 1.5% to 2.5% during 2021. The forecast only reflects the initial impact of the third COVID wave.

In another virus-related move, the Center of COVID-19 Situation Administration has proposed that Prayuth's administration extend an emergency decree that has been in place since March 2020 for two more months until September. The decree was to expire by the end of this month. The cabinet is expected to approve the extension in its weekly meeting on July 13.