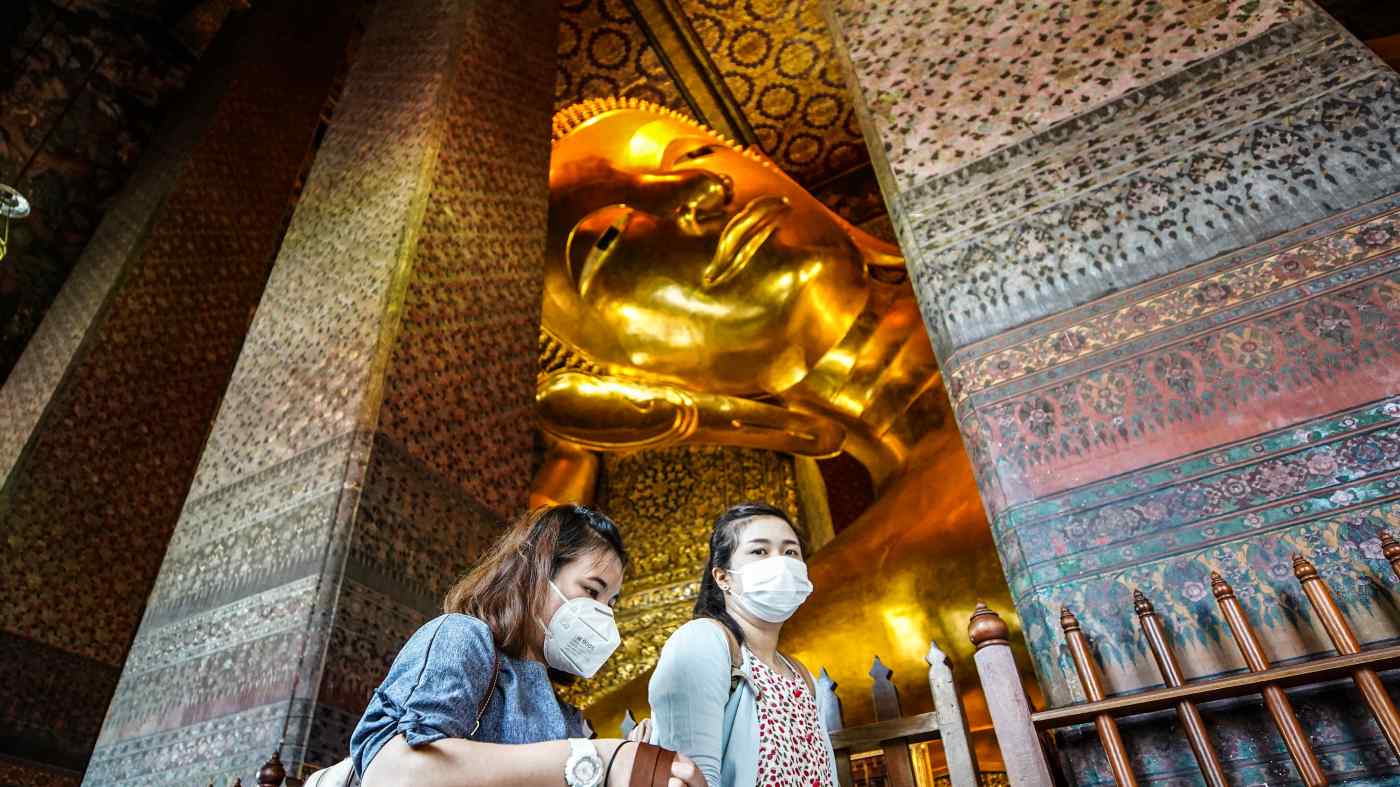 BANGKOK -- Thailand will shorten its mandatory quarantine period for foreigners arriving in the country, starting in April.

The kingdom will use its soil as a testing ground for every tourism-dependent country around the world. Reducing the isolation period is a crucial step for the recovery of South Asia's second-largest economy, yet the trial may expose the country to the risk of another domestic epidemic.

Thailand will be the first country in the region to shorten the required isolation period. In other parts of the world, the U.S. Centers for Disease Control and Prevention has since December recommended travelers stay home for seven days if they take a COVID-19 test after arriving, in addition to one required before departure, and 10 days if they do not -- both less than 14 days. The U.K. also shortened the period from 14 days to 10 in December.

The Thai government has not released an official written announcement on clipping the quarantine, or fully elaborated on what scientific or medical basis it used to reach that decision. However, judging from information voiced by the relevant government agency, here is what you might want to expect and know:

What will change from April?

According to the Center for COVID-19 Situation Administration, which supervises the Thai government's coronavirus policies, Thais and others arriving from abroad will have to quarantine themselves for 10 days, shorter than the previously required 14 days.

Travelers must get two PCR tests: one between the third and fifth day after arrival, and another on the ninth and tenth day.

While in isolation, people will be allowed to move inside the facilities where they are staying. They can use fitness centers and swimming pools and make purchases at kiosks. Previously, those in quarantine could not leave their room.

Additionally, those who have been vaccinated can go to six popular areas for tourism -- the provinces of Phuket, Krabi, Pang-nga, Samui, Chonburi and Chiangmai -- after quarantining for seven days from April.

Those arriving from countries with an epidemic of mutated coronavirus must still isolate for two weeks. The countries include the African nations of Kenya, Rwanda, Mozambique, Cameroon and Congo. How does Thailand plan to proceed on further easing?

The government plans to conduct a sandbox experiment from July 1 by not requiring any quarantine for vaccinated foreign travelers on the popular southern resort island of Phuket. The experiment requires the inoculation of at least 70% of the island's residents as a precondition, according to Gov. Yuthasak Supasorn of the Tourism Authority of Thailand.

The Center for COVID-19 Situation Administration has an ambitious plan to eventually expand the experiment to all areas in Thailand where more than 70% of the population has been vaccinated.

What other measures has Thailand adopted to attract visitors?

Although not as general as shortening the quarantine period, Thailand has been introducing unique alternatives to spending 14 days isolated after arriving from abroad. The options were intended to remind visitors of the kingdom's tourist attractions.

In January, the government came up with the idea of a "golf quarantine," in which visitors spend their first two weeks in Thailand at a golf resort. They must stay in their room for the first three days but later are allowed to go out and play if their PCR test comes back negative. The first batch of 42 golfers -- 41 Koreans and one Japanese -- arrived on Feb. 19 and successfully completed their 14 days on March 3 at Artitaya Golf and Resort in Nakhon Nayok, about 65 km northeast of Bangkok.

On March 10, the Tourism Authority of Thailand announced another option, "Digital Yacht Quarantine," at the island of Phuket. The project allows boat owners and others on board to complete their 14-day quarantine on their boat. Upon arrival, they must arrange a PCR test with health authorities. Visitors are given a smartwatch, which must be worn at all times during the quarantine to monitor their pulse, blood pressure and body temperature, and they must remain within 10 km of shore. After the data acquired over 14 days is analyzed, visitors can go ashore in Phuket.

Why is it so important for Thailand to open up its borders as soon as possible?

Welcoming tourists is a key for reviving the Thai economy, as tourism accounts for roughly 20% of the kingdom's gross domestic product. The economy recorded a 6.1% contraction in 2020 because service exports -- which include spending by nonresidents such as tourists -- plunged 60% compared to 2019.

Since Prime Minister Prayuth Chan-ocha took power through a military coup in 2014, his cabinet has worked on transforming the country by boosting domestic demand, encouraging innovation and moving the country up the value-added ladder. The effort, which required time, was incomplete before the coronavirus pandemic spread across the world.

A survey was conducted between Jan. 10 and 12 by the Tourism Authority of Thailand, asking about the prolonged adverse effects of the pandemic and Thailand's border closures. Of 1,884 operators of businesses such as accommodations, travel agencies and restaurants, 34.7% said they had shut down or gone out of business. Further shrinking of the tourism industry could mean recovery will take a longer time. A woman receives the Sinovac COVID-19 vaccine at a market in Bangkok on March 17.   © Reuters

How is the COVID-19 situation in Thailand?

The situation appears to be under control, as the resurgence that emerged in December has gradually wound down. In March, the country reported 2,912 cases, down from January's 11,898 and February's 7,230.

The surrounding Southeast Asian countries of Indonesia, the Philippines, Malaysia, Myanmar and Singapore reported more cases than Thailand, while Vietnam, Laos, Cambodia and Brunei reported fewer. Considering its population and the size of its economy, it is safe to say the kingdom has dealt with the pandemic better than most.

Its track record in dealing with the pandemic likely gave Thailand confidence, allowing it to make a leap and shorten the required quarantine period.

However, when it finds signs of a new increase in cases, the Thai government tends to resort to stringent controls such as business closures. If the shorter quarantine period brings the virus along with tourists into cities, the price the economy will be forced to pay may be high.

An influx of refugees expected from Myanmar following the coup there may also be a source of a new epidemic. The government had blamed migrant Myanmar workers in the marine products industry for the resurgence in December, even though they were forced to live in cramped conditions. The Thai Border Patrol had already raised its guard last year, as the government believed it would better be able to control the virus if illegal immigrants did not enter from its neighbor.

The Bank of Thailand has lowered the 2021 growth projection for the Thai economy from 3.2% to 3.0%, due to mild business lockdowns to counter the resurgence.