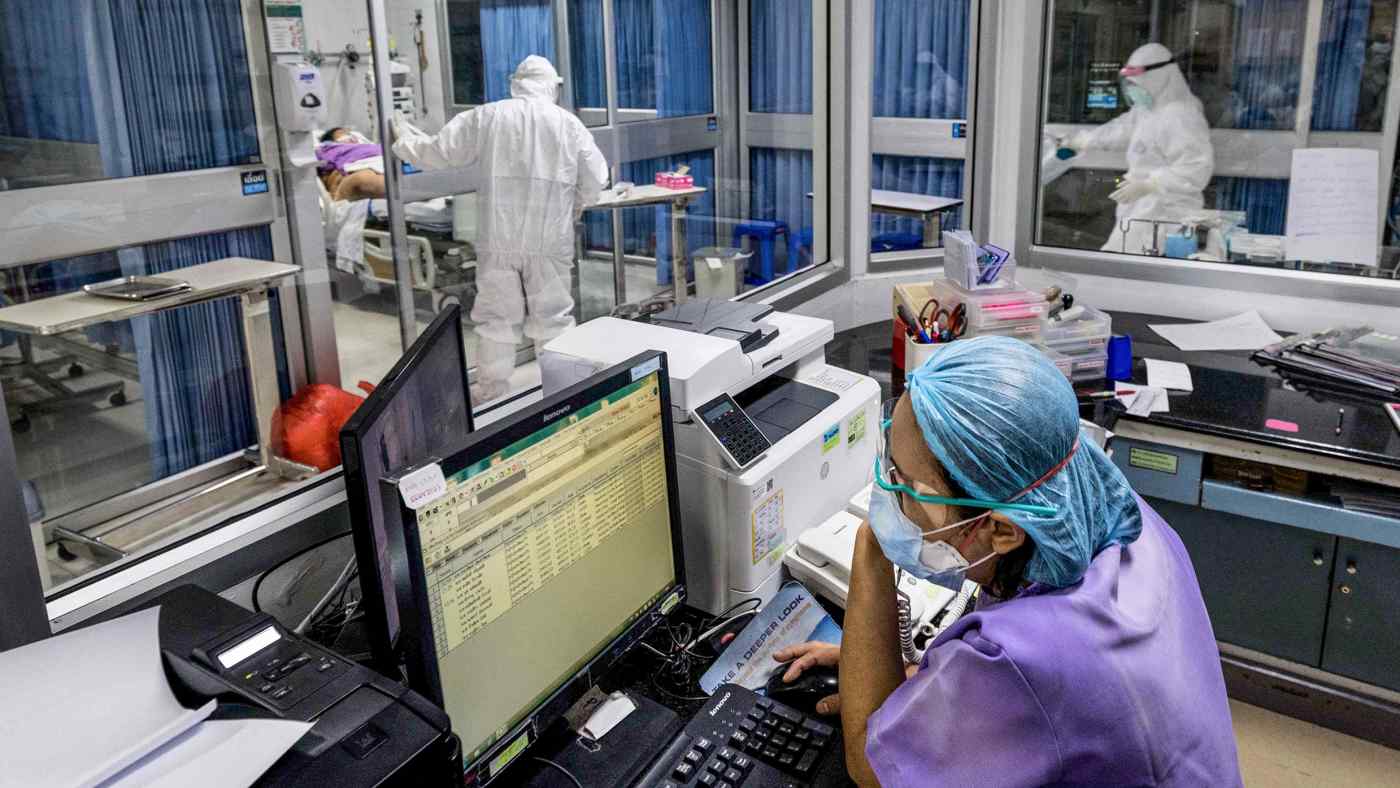 BANGKOK -- New waves of the coronavirus have prompted Southeast Asian countries to tighten restrictions on business and social activity as shortages of hospital beds stretch from Thailand to Malaysia to the Philippines.

Bangkok has closed more businesses including cinemas, gyms and parks for two weeks starting Monday, while a majority of the country's provinces have imposed a fine up to 20,000 baht ($635) for failing to wear a face mask in public. Malaysia has had new daily COVID-19 cases hover in the four digits for days despite emergency measures meant to control the spread. The Philippines' cumulative cases reached 1 million on Monday.

The new wave hits Thailand just as the country was looking to reopen its tourism-dependent economy and comes as variants of the coronavirus drive surges of infections in other Asian countries, notably India.

Thailand reported 2,179 new COVID-19 cases on Tuesday, bringing the total to 59,687 since the pandemic started. It was the fifth straight day Southeast Asia's second-largest economy recorded more than 2,000 daily cases. On Saturday, the kingdom logged 2,839 cases, a record high.

The epicenter of Thailand's third wave, which started in late March, has been Bangkok. The capital reported 993 cases on Tuesday. On Friday, the government warned that hospital beds in Bangkok could dry up in the next six to eight days if the situation is not brought under control.

Field hospitals have been prepared in Bangkok and surrounding provinces, but some patients have refused to be transferred there and opted to stay home, creating a mini cluster within their close circles of family and friends.

Thailand has recorded 163 COVID-19 deaths so far, but the government appears to be bracing for a higher death toll in coming days. The National Office of Buddhism ordered temples last week not to decline cremation services for people who die from the disease.

"We want to make sure that COVID-19 victims receive their last rites," a director of the agency said, according to local media.

To contain the new wave, Bangkok has imposed new business closures on top of the existing ones that have shuttered nightlife venues, such as bars and pubs, for a few weeks.

Shopping malls will operate for shorter hours from 11 a.m. to 9 p.m., while convenience stores can open only from 5 a.m. to 10 p.m. Hair salons can provide cutting and washing services but will not allow dyeing and perming.

Roughly 50 out of 77 Thai provinces require people to wear a mask in public, enforced by a hefty fine. The mask rule quickly became common across the country after domestic migrant workers in Bangkok brought the virus to their hometown during Thai New Year, known as Songkran, this month. 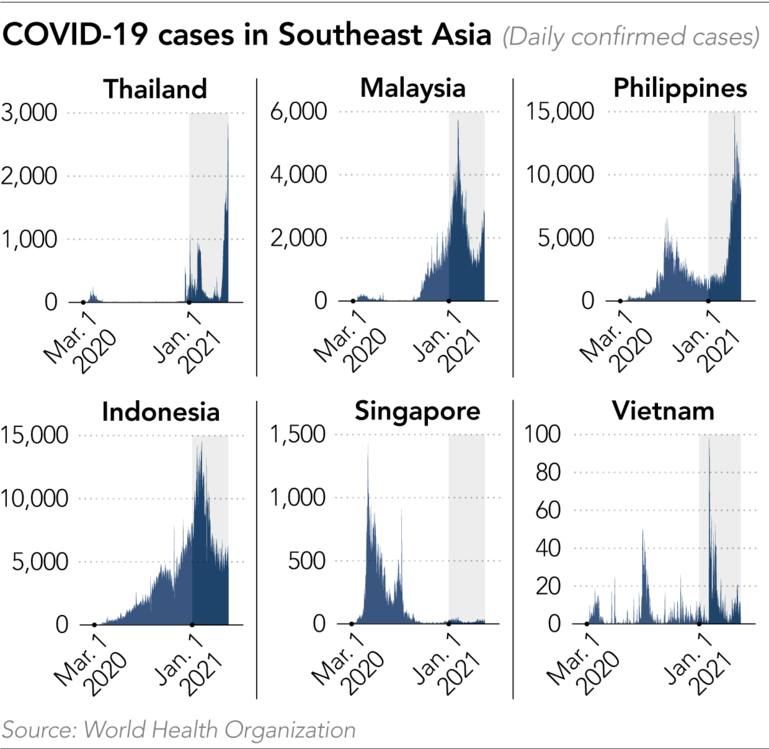 Prime Minister Prayuth Chan-ocha became the first known public figure to violate the rule on Monday. A photo of him in a meeting without a mask was shared on his Facebook page and quickly went viral. The prime minister admitted wrongdoing and was fined 6,000 baht that day. Bangkok fines 6,000 baht for the first violation, 12,000 baht for the second, and 20,000 baht for the third and beyond.

The prime minister's bungle did not quell growing public criticism over the government's failure to contain the third wave. The emergence of the third-wave has been traced to nightclubs in Bangkok popular with politicians and powerful businessmen, fueling people's anger along with a slow vaccine rollout.

According to an opinion survey conducted online by the Suan Dusit Rajabhat University from April 16 to April 22, 67% of 2,082 respondents fear that the government cannot cope with a resurgence situation or keep it under control.

Opposition party Move Forward accused government officials of negligence for allowing the third wave to spread. It demanded Deputy Prime Minister and Public Health Minister Anutin Charnvirakul resign over the matter, which he refused to do.

The country's vaccination program is under fire once again. Only 1.8% of its adult population have received a first dose, while 0.3% received a second, according to The Economist. Prayuth said on Facebook Monday that the country has a goal of inoculating 50% of its population by the end of the year or sooner, lower than 70% previously stated.

Thailand relies heavily on domestic vaccine production by Siam Bioscience, which is part of King Maha Vajiralongkorn's vast business holdings. The biotech company aims to pass quality checks by several labs in Europe and the U.S. and register the vaccine with the Thai Food and Drug Administration, before rolling them out in July, about a month behind schedule.

Even though the company is licensed by AstraZeneca, some Thais doubt the company can mass produce the vaccines in a quality manner. The prime minister said the country targets to obtain 10 million to 15 million doses of various brands of vaccine per month, so that it can inoculate at least 300,000 people per day.

In Malaysia, a state of emergency declared in January to control the spread of the virus has proved futile, sparking a debate as to whether the declaration was a political move to safeguard premier Muhyiddin Yassin's shaky position with lack of support among lawmakers. Malaysians pray before breaking fast during Ramadan at a public park in Shah Alam, outside Kuala Lumpur, on April 25.   © EPA/Jiji

The government's flip-flop on policies over restrictions on movement, especially to accommodate fasting during the Islamic holy month of Ramadan, is said to be among the factors for the spike in new cases. The reopening of schools has also resulted in increased cases among students and teachers.

The immunization process which began this year has also been slow because of a short supply of vaccines and a skeptical public. Only 35% of the 27 million Malaysians eligible for the vaccines have registered for the shots.

Despite the lack of a vaccinated population, the government has eased some restrictions.

Malaysia's Health Director-General Noor Hisham Abdullah recently warned new cases in the country could increase to 5,000 a day because people are not complying with restrictions and other preventive measures such as mask orders.

He said the virus' effective reproduction rate stands at 1.16 where cases are expected to climb drastically if compliance remains weak. The Health Ministry had previously targeted for 500 new cases per day for next month.

COVID-19 infections in the Philippines surpassed 1 million on Monday, with nearly 9,000 new cases reported. The country has been grappling with its worst outbreak since last month, leaving hospitals overwhelmed and forcing President Rodrigo Duterte to impose stricter lockdown measures on Metro Manila and four nearby provinces, covering 24 million people.

The government has also set up modular health care facilities to accommodate a rising number of sick patients, but local health officials have advised against relaxing lockdown rules, which are set to expire at the end of the month.

"We see the importance to continue these restrictions to further decongest our health care system, which is primarily our major concern among our parameters," Maria Rosario Vergeire, health undersecretary, told reporters on Monday.

The surge in infections has been attributed to the easing of community quarantine restrictions. But an onslaught of new and believed to more contagious variants, such as those first detected in the U.K. and South Africa, exacerbated the situation. On Tuesday, the Philippines announced a two-week ban beginning Thursday on travelers from India.