BANGKOK -- After a botched vaccine rollout that saw a third wave of COVID-19 wash over Thailand, the country is rushing to secure supplies of the antiviral medication Favipiravir as the number of patients and fatalities spirals higher.

The Pharmacy Council of Thailand has issued a warning letter to the Public Health Ministry about a possible shortage of Favipiravir, as demand for the drug is forecast to surge as high as 30 million pills per month and could reach more than 50 million pills if the number of COVID-19 patients continues to rise.

"Although the Government Pharmaceutical Organization (GPO) has successfully developed our own [version of] Favipiravir, production capacity is only 2 million pills per month," Jiraporn Limpananon, president of the council, said in a statement, referring to the GPO's drive to produce Favipiravir since last year, when the first wave of the coronavirus hit.

Favipiravir, sold under the brand name Avigan, is approved as a treatment for new and emerging influenza in Japan. It is also being studied as a treatment for other viral infections, including SARS and COVID-19. Thailand began importing it, mostly from Japan, to treat COVID-19 patients since the start of the pandemic last year. 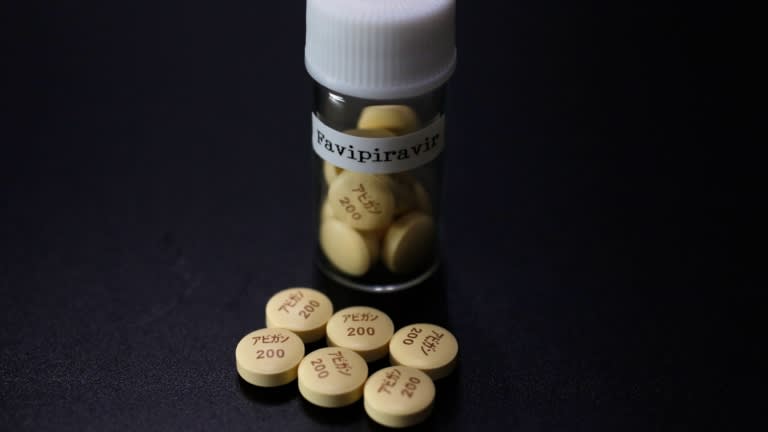 Japan's Fujifilm Holdings restarted a clinical trial for its antiviral medication Avigan, which has not yet been approved by the country's health ministry as a COVID-19 treatment.   © Reuters

In mid-2021, the GPO successfully developed its own version of Favipiravir, which it markets under the brand name "Favir" (200 mg per tablet). It was registered by Thailand's Food and Drug Administration in early August. In the first phase, capacity is up to 2 million tablets per month, with the aim of continuously expanding production.

"The Public Health Ministry should urgently seek additional medicine from other sources as soon as it can, otherwise Thailand will face a serious shortage of Favipiravir at a time that the number of new patients is forecast to rise sharply in August," she said.

Favipiravir has been a key medication in the treatment of patients suffering from severe COVID-19 infections in Thailand. The government has secured supplies of the drug specifically for the pandemic, as it is available by prescription only and is not sold over the counter.

GPO Director Dr. Vitoon Danwiboon has sought to reassure the public, saying the GPO has secured about 43.1 million pills for August, when the number of COVID-19 patients is forecast to peak, through imports from Japan.

On Tuesday, daily confirmed cases of COVID-19 remained high at 19,843, while the daily death toll hit a new record high of 235, causing a wave of concern in Thailand, particularly in Bangkok, the center of the outbreak. Some epidemiologists and virologists forecast the number of new confirmed cases could reach 40,000 per day this month. Vitoon said the capacity of the GPO is expected to rise, reaching 40 million tablets per month by October. However, that has not eased public fears. Counterfeit Favipiravir is being sold online as desperate COVID patients, isolating themselves at home, seek treatment.

Favipiravir, which was originally developed by Fujifilm Holdings subsidiary Fujifilm Toyama Chemical, has not yet been approved by Japan's health ministry for the treatment of COVID-19. In December, the ministry said it needed to see more data to evaluate its efficacy. In response, Fujifilm launched a new clinical trial in April.

Toyama Chemical developed Favipiravir in the late 1990s. The drug was approved in 2014 to treat new or re-emerging influenza infections, but it has not been approved for the treatment of seasonal influenza. One area of concern is birth defects seen in animal tests on the drug.

Despite the setbacks, Fujifilm sold 1.6 million Avigan tablets for the financial year ended in March. The Japanese government is stockpiling Avigan and providing it to hospitals as part of an observational study. As of February, hospitals had administered Avigan tablets to nearly 11,000 patients, according to Fujita Health University, which is leading the study.