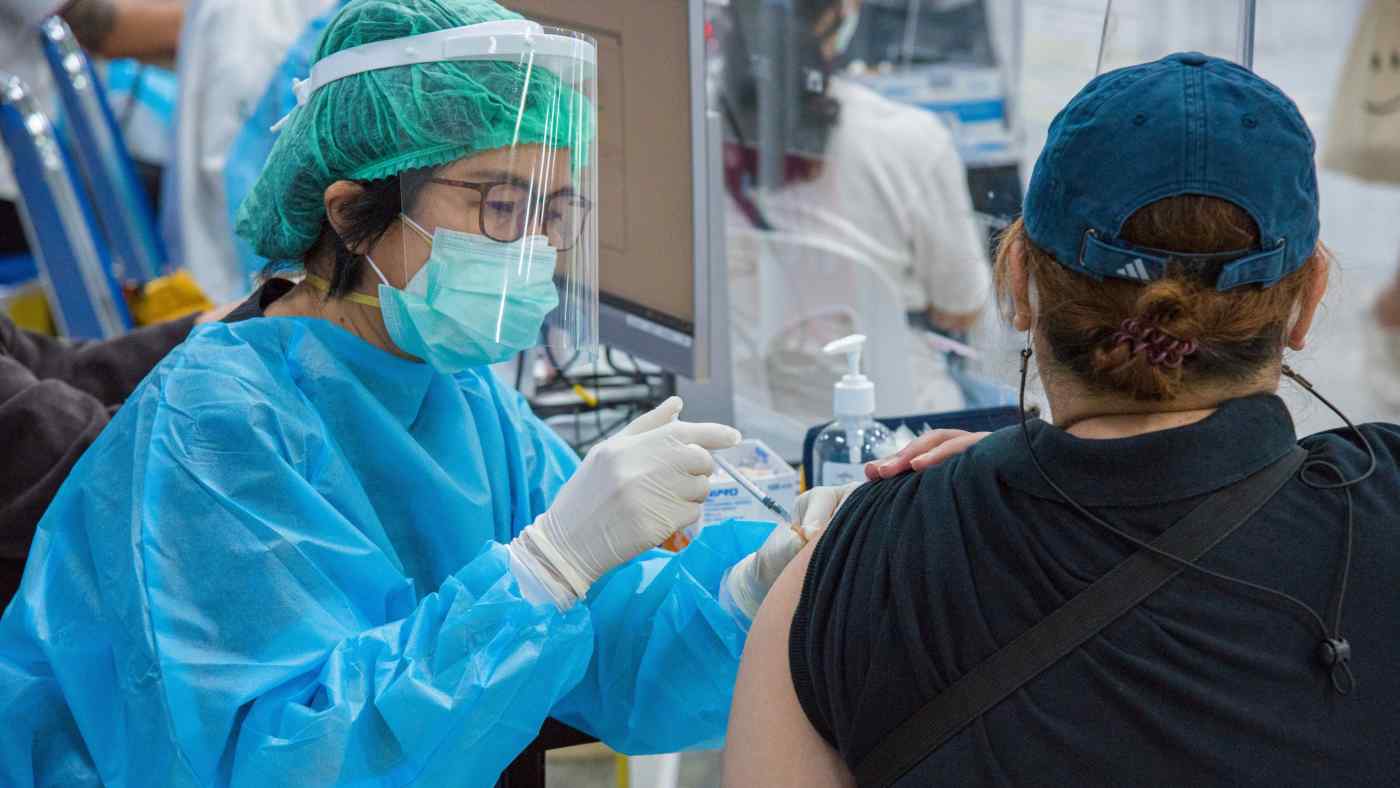 A health worker on Sept. 24 administers an AstraZeneca shot to a patient at Bang Sue Grand Station in Bangkok, which is a little more than a month away from welcoming back international travelers.   © AP
MASAYUKI YUDA, Nikkei staff writerSeptember 27, 2021 20:54 JST | Thailand
CopyCopied

BANGKOK -- Thailand this week is expected to allow spas, cinemas and museums to reopen and also shorten its nighttime curfew as it moves to get its tourism infrastructure back up and running, a crucial step now that it is weeks away from welcoming back the free-spending international travelers who support much of its economy.

The government's policymaking agency for coronavirus-related issues is recommending 29 provinces, including Bangkok, be allowed to trim an hour off the curfew and that more businesses be given the go-ahead to resume operations.

The Center for COVID-19 Situation Administration, or CCSA, on Monday decided to start the curfew at 10 p.m. rather than 9 p.m. The 4 a.m. end time remains in place.

Other businesses it wants to reopen include gyms, swimming pools and tattoo parlors. The previous round of reopenings affected restaurants, hair salons, foot spas and outdoor sporting venues. The serving of alcohol at eateries will remain prohibited.

The easing will be considered on Tuesday at a weekly cabinet meeting. The cabinet is expected to endorse it as the CCSA meeting was chaired by Prime Minister Prayuth Chan-ocha. The easing will be implemented once its measures are published in the government's public journal, the Royal Gazette.

The agency will hold another meeting in two weeks to adjust the restrictions in line with the pandemic situation.

The CCSA has also decided to cut the required quarantine period for international arrivals to seven days if they carry a certificate of full vaccination. Without a certificate, visitors arriving by air or sea will have to quarantine for at least 10 days. Those crossing a land border will have to remain secluded for 14 days.

The Prayuth administration in late August shifted its COVID-19 strategy from completely eradicating the virus to coexisting with it. Along with the shift, the government began encouraging Thailand residents to get vaccinated as soon as possible. People pray while maintaining social distance at a shrine near the Central World shopping mall on Sept. 11, 2021.   © AP

The increase in administered jabs has slowed the virus's spread. The delta strain began tearing through the kingdom in early July, protracting and expanding the country's third COVID-19 wave, which began in March.

With new daily infections on the wane, the country has room to start lifting restrictions, which have devastated Southeast Asia's second largest economy and threaten more harm if left in place.

On Wednesday, the Asian Development Bank downwardly revised its growth forecast for the Thai economy to 0.8% from 3%, reflecting the damage caused by the lockdowns.

By allowing more attractions and services to reopen, pushing back the curfew and shortening the quarantine period, Thailand hopes it can lasso some foreign travelers who are now beginning to think about international vacations. The CCSA says Bangkok and nine other tourist destinations will be open by Nov. 1.

Authorities have been sending mixed messages regarding Bangkok's reopening. The central government was pushing to reopen the capital by October, but the local government insisted next month would be too soon, that it needed additional time to vaccinate more residents. The CCSA's announcement on Monday may settle the debate.

As for the shorter quarantine period, it might make it easier for expats in Thailand to go on long-delayed visits to their home countries.

Thailand's vaccination drive kicked into a higher gear when the country decided to mix and match vaccines, allowing Sinovac doses for the first shot and AstraZeneca for the second.