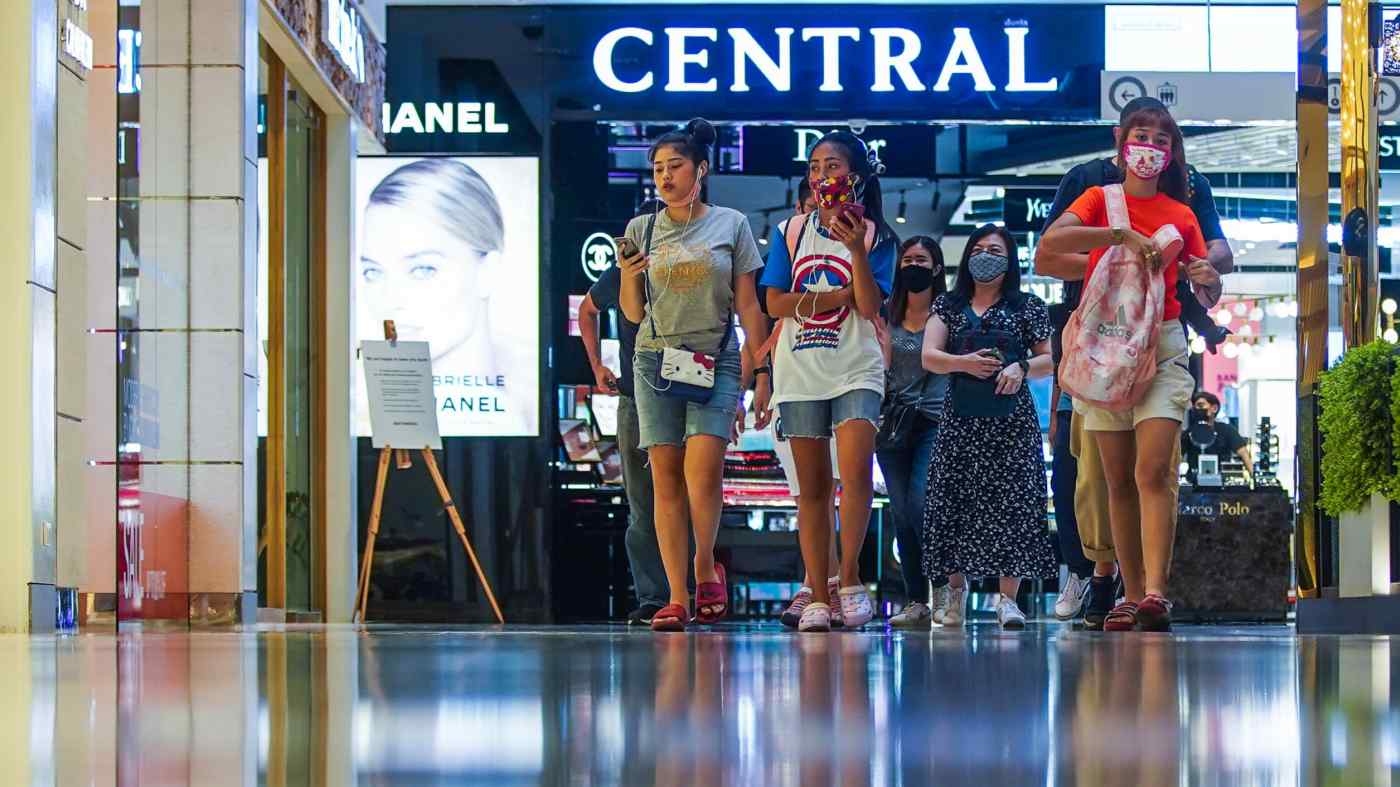 BANGKOK -- Thailand on Sunday further eased its coronavirus-related restrictions by reopening shopping malls across the kingdom in an attempt to jump-start consumption, a key driver of the economy.

The move followed its May 3 decision to reopen outdoor markets after closing them for nearly 50 days.

Some eager consumers were seen lining up in front of CentralWorld Sunday morning, but it wasn't as crowded as expected. Traffic at the notoriously busy Ratchaprasong intersection, where the giant mall is located, was smooth and vehicles were few in the afternoon.

Customers were also allowed to dine at restaurants within such malls from Sunday. However, massage parlors, cinemas, boxing stadiums and entertainment venues will remain closed for at least another two weeks.

"I have stayed at home for too long and wanted to go out -- even window shopping is great," said a female office worker in her 30s. She was among 10 customers lining up outside the Kinokuniya bookstore within CentralWorld. The bookstore limits the number of customers inside to 60 at a time.

Mall operators are eager to persuade customers to spend again, as the pandemic has suppressed buying and kept travelers away from the kingdom.

Central Pattana, the operator and developer of Thailand's leading shopping centers under the brands Central World and CentralPlaza, expects 25-40% of customers will come back to shop.

The Bangkok-based company has unveiled plans to ease shoppers' nerves. In addition to temperature screenings and social distancing, it assigns staffers to operate elevators for customers, just like malls in Japan used to do. Central Pattana also encourages customers to pay with mobile banking instead of cash, in a society where cash accounts for 90% of total payment values.

Last Wednesday, Thailand reported zero COVID-19 infections for the first time in over two months, making the country the second in Southeast Asia after Vietnam to bring down new infections. The kingdom entered a state of emergency on March 26, followed by a curfew on April 3, before easing up the first phase of restrictions on May 3. During that period, only supermarkets and convenience stores were allowed to operate, and their hours were restricted. On Saturday, the country reported three new cases -- all imported -- bringing the total to 3,028.

In comparison, the Philippines, Singapore and Indonesia continue to report hundreds of cases daily. Malaysia's strict lockdown has brought down daily increases in new infections, but it continues to report double-digit rises.

Despite the improving infection rate, Thailand's economy will not be spared from the COVID-19 havoc. The downtrend "does not mean that Thailand will be free from infection," said Taweesin Wisanuyothin, a spokesman for the government's Center for COVID-19 Situation Administration. "Everyone should maintain his or her 'new normal' life by washing their hands, wearing a mask and keeping their distance," he warned at a news conference on Wednesday.

The Tourism Authority of Thailand projected in May the number of foreign tourists may plunge by almost two-thirds to 14 million this year, the lowest level in 14 years. This compares to a record 39.8 million foreign arrivals in 2019.

As the pandemic continues to weigh on trade and inbound tourism, key pillars of the Thai economy, the government is ramping up efforts to reignite domestic demand. Household consumption makes up nearly 49% of Thailand's gross domestic product.

Ushering in a "new normal" is a key part of Bangkok's push to drive domestic demand.

Temperature checks, mask wearing in public spaces, social distancing, and the use of technology in tracing people's whereabouts are set to take center stage in the foreseeable future.

The government sped up to launch an app called Thai Chana, or "Thais Win," on Sunday to track people's movements for contact tracing in case an infection is found. The app will allow all types of businesses to register and generate a separate QR code for them. Customers do not need to download the app, but are required to scan the code to "check in" and "check out" when they use such services.

The government has told the public the app will not invade people's privacy and will help stem the pandemic. Government officials said over 26,000 shops had registered with more than 150,000 checkouts recorded by 11:30 a.m. on Sunday. Check-ins reached 4,600 per minute on average, the government said.

The struggle to adjust to the new normal is on display outside the malls.

On May 9, when Chatuchak Weekend Market was reopened, Roger Wu, a renowned Hong Kong YouTuber with 80,000 subscribers, was rejected twice before being allowed in.

Wu had trouble entering Asia's largest outdoor market, which is famous for selling everything from foodstuffs, to clothing, to home furniture, because his temperature checks were above 37.5 C.

He waited for his body to cool down amid the hot weather and the third screening finally granted him the green light to enter. He was expected to wear a mask at all times in the market.

While Chatuchak sprung back to life on May 9, half of its 10,300-plus vendors had reportedly yet to open for business. Customers arrived in dribs and drabs, compared with a pre-virus level of over 20,000 per weekend.

Senior chairman Dhanin Chearavanont, who topped Forbes magazine's "Thailand's 50 Richest" this year, has urged the government to welcome foreign travelers as soon as possible. A ban on international air travel has been extended until the end of June.

Infection and death rates in Thailand are very low compared with other countries, Dhanin told the Bangkok Post. "This reflects the fact that our doctors and hospitals are the best and we need to tell the world about it."