TOKYO -- The crisis brought on by the spread of the novel coronavirus has exposed myriad problems the world had ignored, ranging from jolts to democracy, rising tensions among global powers, widening income disparities and a stagnant economy.

Looking at it in a positive way, however, this period could mark a great chance for humanity to reevaluate our values that remain stuck in 20th century thinking and revamp the way we run our lives and economies to tackle what seems at present to be endless chaos.

"We may all be in the same storm, but we're not all in the same boat," Inez Barron, a New York City councilwoman, says of the situation.

America's largest city has suffered 24,000 deaths due to the coronavirus, the highest figure in the U.S. The death rate in Brooklyn -- which has the lowest income level in New York City -- amounts to 275 per 100,000 people. That is 1.8 times higher than Manhattan, where the income level is the highest.In an interview with Nikkei, Barron said Brooklyn residents "were required to go to work to be able to earn their income, exposing [them to] additional risk to the virus."

The public health crisis has also made clear the sobering reality that our history of development and growth is hitting a cul-de-sac. People wear face masks as they wait in line to receive free food at a curbside pantry for needy residents run by the Catholic Charities of Brooklyn and Queens amid the coronavirus outbreak in the New York City borough of Brooklyn on April 24.   © Reuters

Great powers from Rome in antiquity to the British Empire in the 19th century to the United States in the 20th have led the world to prosperity, establishing trade and governance systems that brought order to economic and political affairs and shaped the framework of human thought. In short, they brought Pax, Latin for the Roman goddess of peace but that also refers to a period of international tranquility and prosperity imposed by the most powerful nation.

But the world today lacks any such definitive force to guarantee such an order.

In the 21st century, the redistribution of wealth as a tool is largely dysfunctional as the pie of prosperity has stopped growing. Potential output, or natural gross domestic product, in the U.S. declined to below 2% in 2008, the year the global financial crisis erupted, for the first time in the post-World War II era. The annual income level for those 25 to 37 years of age with a bachelor's degree or equivalent fell to $62,000 in 2018, $4,000 lower than in 1989.

Thus, the myth that children will be richer than their parents has been proved wrong. Peter Temin, an economic historian, told Nikkei that "the U.S. has transitioned to a developing economy" with only wealthy and low-income populations.

The International Monetary Fund expects the annual real GDP growth rate for developed nations between 2010 and 2020 to be 1%, lower than the 3% of the 1980s and 1990s. A "frigid" economy has spread throughout the globe.

Politically, democracy is at risk as autocracies and populism gain power on the back of growing discontent toward widening wealth gaps. Without some kind of benevolent Pax, the world is headed toward chaos.

In the past, population growth was the main driver of global development. The industrial revolution in the 18th century raised productivity in tandem with the rapid increase in the number of people. The world's population doubled from one billion in the early 19th century to 2 billion over the following 125 years. The population growth rate in the 1960s was above 2% as countries such as Japan saw sharp increases, which enabled their economies to grow faster.

But now, population growth is stunted in many parts of the globe, while most of the increase comes from the African continent. The global population is expected to peak in the year 2100 and decline from there. The ongoing coronavirus pandemic surely will not help as we enter an age of fewer people.

The digital economy also plays into long-term stagnation. China's Ant Group which runs payment app Alipay, is expected to list its shares this fall. With a corporate value estimated at $200 billion, the company is as large as Toyota. Its payment app, which boasts over 1 billion users, is the source of its value. 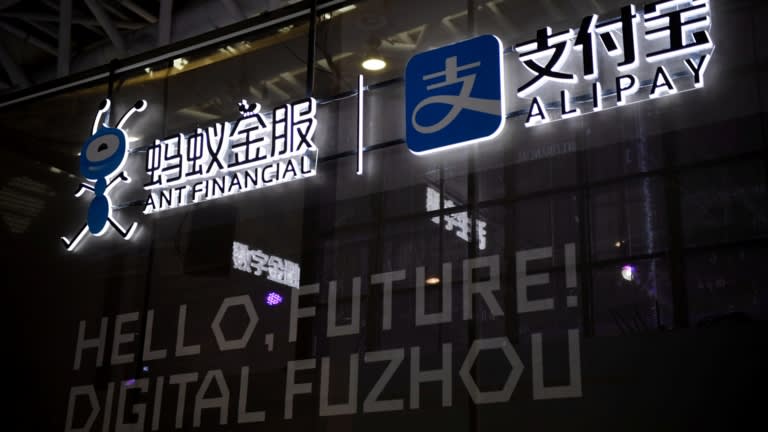 China's Ant Group employs just 17,000 people though it has an estimated corporate value similar to that of Toyota Group with 360,000 employees.   © Reuters

The company is backed by its approximately 17,000 employees who are mainly engineers. Compared to the some 360,000 people Toyota Group employs, Ant Group's figure is minimal. As the source of wealth shifts from manpower to data, companies no longer need to hire massive numbers of people. But the concentration of wealth in a limited number of skilled workers leads to lower growth and wider wealth disparity.

As the coronavirus has made direct human contact a risk, digitalization of economies will accelerate even more. The role of government has become larger to save lives and ensure the livelihood of people who cannot move about freely.

Coronavirus-related government expenditures across the globe amount to $12 trillion so far, topping government spending during the global financial crisis. The ratio of government debt to GDP in Organization for Economic Cooperation and Development, or OECD, member countries is expected to rise from an average of 109% to over 130%. As countries tackle the crisis, the idea of "small government" and "civilian empowerment" has been shunted aside.

Nevertheless, ideas from the private sector are essential to achieve technological innovations. But the current climate only diminishes hope that a new goddess of growth can be cultivated.

Bringing down massive government debt to a normal level is an inevitable task for governments. We need to prepare now to polish our technologies and systems to raise productivity as much as possible and create a solid ground for functional growth with an effective redistribution of income.

In January, Finland implemented a law that allows people to work over half of their hours in a location of their choice. The Nordic country was quick to adapt to the remote working that has become an increasingly accepted norm in the climate of today's pandemic. Its labor productivity has tripled in the last 30 years and is now higher than those of Group of Seven nations.

We need to reevaluate and ensure this basic pillar of growth is still standing. If we can make it through the current crisis and also use this time as a rare opportunity to overcome our weaknesses as global citizens then the goddess we seek will be waiting to illuminate the future.