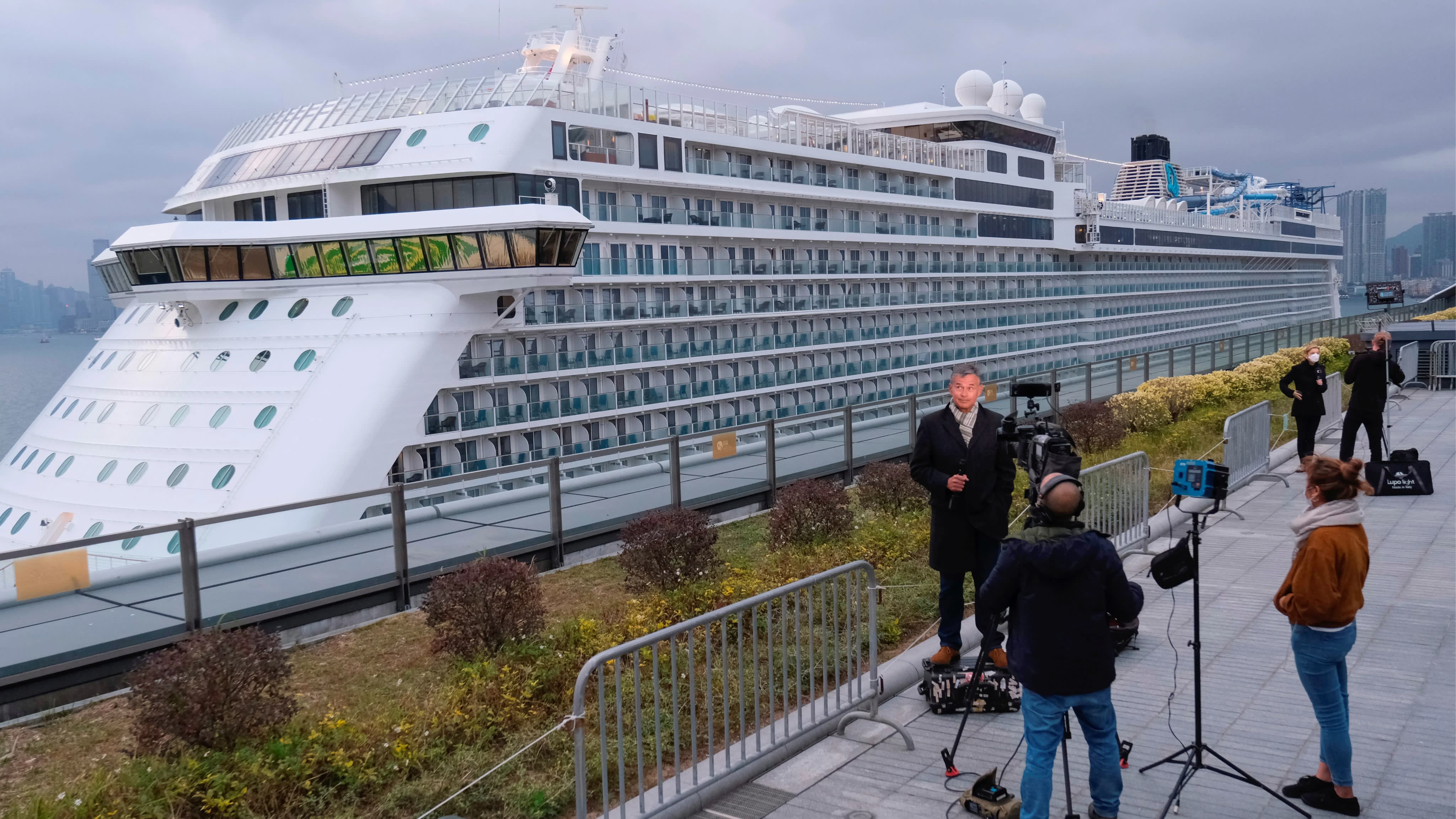 Media work in front of the World Dream cruise ship, which had been denied entry in Taiwan amid concerns of coronavirus infection on board, at the Kai Tak Cruise Terminal in Hong Kong on Feb. 5.   © Reuters
February 5, 2020 19:47 JST | Hong Kong, Macao
CopyCopied

HONG KONG (Reuters) -- Thousands of passengers and crew on a cruise ship that docked in Hong Kong on Wednesday were being kept on board while they were tested for a coronavirus as the city government said that all visitors from mainland China would be quarantined for two weeks.

The former British colony saw its first death from the coronavirus virus on Tuesday. It has confirmed 21 cases, with many that were transmitted locally, authorities said.

Hong Kong health workers have been on strike this week to demand that city authorities seal the border with China, where the virus originated last month, to block its spread.

The cruise ship, World Dream, operated by Dream Cruises, docked in Hong Kong after it was denied entry to the Taiwan port of Kaohsiung on Tuesday.

It has some 1,800 passengers and a similar number of staff on board.

Three mainland Chinese who had been on board from Jan. 19 to Jan. 24 were found to have had the virus, Hong Kong's health department said, adding that most of those remaining on board were from Hong Kong. Some crew had reported symptoms including fever, health officials said.

Dream Cruises, which is operated by Genting Hong Kong >, said the three confirmed cases of the virus had disembarked in the Chinese city of Guangzhou on Jan. 24.

The coronavirus epidemic, which began in the central Chinese city of Wuhan in December, has rekindled memories in Hong Kong of a 2003 outbreak of Severe Acute Respiratory Syndrome (SARS), another coronavirus that began in China and killed nearly 300 people in the city.

The latest virus has spread rapidly in China with nearly 25,000 people infected and 490 deaths, most in Wuhan and the surrounding province of Hubei.

Hong Kong health workers and members of other trade unions have demanded the border with the mainland be completely sealed.

"We are dangerously close to a massive community outbreak comparable to SARS," a newly formed union called the Hospital Authority Employees Alliance (HAEA) said in a statement.

Lam has closed some border crossings and links with the mainland but she has left three open, arguing that to close the entire border would be inappropriate, impractical and discriminatory.

She said the government was allocating HK$10 billion ($1.3 billion) to fight the spread of the virus.

Thousands of medical staff have joined members of other trade unions this week and the city's Hospital Authority has warned that emergency services are being severely hampered.

On Wednesday, dozens of medical representatives marched to government headquarters to demand for the border to be sealed.

The health scare comes after months of at times violent anti-government protests in Hong Kong sparked by fears its autonomy, guaranteed under a "one country, two systems" formula, is being eroded by Beijing.

Overnight, police fired teargas and rubber bullets to disperse a crowd in the rural New Territories after protesters denounced the government's refusal to seal the border.