Tokyo has experienced a new wave of infections since the state of emergency was lifted in late May. (Photo by Kosaku Mimura)
AKANE OKUTSU, Nikkei staff writerJuly 30, 2020 12:53 JSTUpdated on July 30, 2020 19:03 JST | Japan
CopyCopied

The metropolitan government will ask establishments to close by 10 p.m. from Aug. 3 to the end of the month, Gov. Yuriko Koike told reporters on Thursday. Those who comply will be eligible for a subsidy of 200,000 yen ($1,900).

"As we look to the long fight against the novel coronavirus, asking for complete business shutdowns is not realistic," Koike said. But she added that she might have to consider declaring a state of emergency in the capital if the situation deteriorates.

In Japan, governments cannot legally mandate that businesses close down or shorten their hours.

The move comes as Tokyo confirmed 367 new cases on Thursday. People in their 20s and 30s account for about 60% of infections, but the proportion of higher risk people aged 40 or older is increasing.

Koike and other officials have called upon people to refrain from nonessential trips but have still struggled to control the virus.

In an interview with the Nikkei Asian Review on Wednesday, Koike said asking restaurants and shops to close will be a "huge burden" for Tokyo's finances.

Subsidies to shop owners have been a financial drain on the metropolitan government that had already spent around 95% of its 935 billion yen ($8.9 billion) reserves set aside for emergencies. 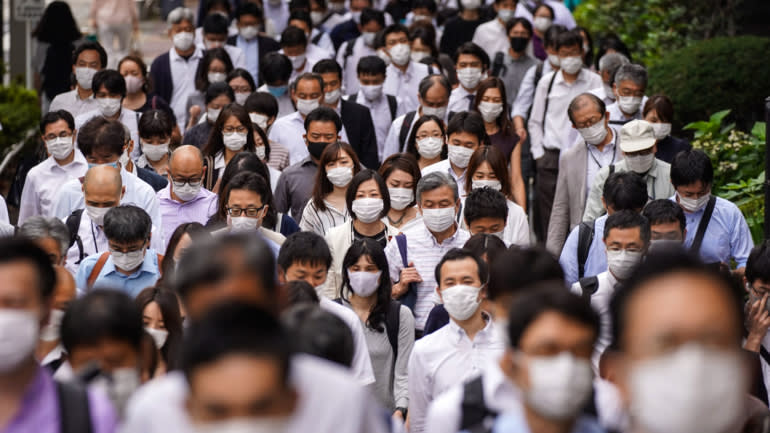 Speaking after a meeting on Thursday with Prime Minister Shinzo Abe and other ministers, Shigeru Omi, head of the government's COVID-19 task force, said: "What we should be mindful of is [the number of] hospital beds."

"Accommodation facilities are also needed, so that those with mild symptoms do not take up [hospital beds]," Omi said, adding that he will continue to press the government on this.

At Tokyo's task force meeting, Norio Omagari of the National Center for Global Health and Medicine said: "Infection pathways are getting more diverse, while many of the previous cases came from host and hostess clubs."

He said infection sources now included dinner gatherings, workplaces, homes and events, and there were now more than 100 requests daily from public health centers to find hospitals for patients. "Authorities are finding it difficult to find hospitals that can house patients," he said.

Tokyo is not the only Japanese city suffering from the virus's resurgence since a nationwide state of emergency was lifted on May 25.

On Wednesday, the nation of about 126 million reported over 1,000 new daily coronavirus infections for the first time. On Thursday, Osaka confirmed 190 cases, Aichi had at least 146, and Fukuoka reported 121.

"It is not the time to declare [a new state of emergency] and restrict social economic activities on mass scale," Chief Cabinet Secretary Yoshihide Suga told reporters on Thursday.

The government's top spokesman said there are few patients suffering from severe conditions or over the age of 60, and the current situation is "different from [the first declaration of a state of emergency] in April."

When asked about the "Go To Travel" subsidies for domestic travel, Suga said that the government will "respond appropriately by consulting with experts when needed."