Tokyo bars and restaurants reopen under a clouded future The usually crowded scramble crossing in the Shibuya district of Tokyo on May 26 shows that residents of the capital are still reluctant to venture out, despite the lifting of the emergency. (Photo by Kento Awashima)
MITSURU OBE and FRANCESCA REGALADO, Nikkei staff writersMay 26, 2020 20:36 JST | Japan
CopyCopied

TOKYO -- The lifting of the state of emergency in Tokyo saw many people resuming their daily commutes by train on Tuesday. With stations bustling, the city seemed almost normal.

In the major thoroughfare of Ikebukuro, the train station that was nearly empty last weekend is again packed. While the morning rush hour crowd was slightly below levels seen before the pandemic, people lined up outside lunch spots surrounding the station at noon. Most wore masks, but social distancing guidelines seemed to have been forgotten.

Observing the crowds, a 70-year-old retiree told Nikkei she was worried. "The state of emergency has been lifted too quickly," she said as she waited for a bus wearing a mask and rubber gloves.

She was more concerned about public health than the economy. "The world has become very scary and I don't know when I'll be able to resume a normal life," she said, adding that she has not seen her daughter since the emergency declaration. "I don't know if it will ever return to normal."

A closer look at life in Tokyo reveals that life is far from normal. A 56-year-old man said he doesn't feel comfortable strap-hanging in crowded trains. "You never know who held it before you," he said. 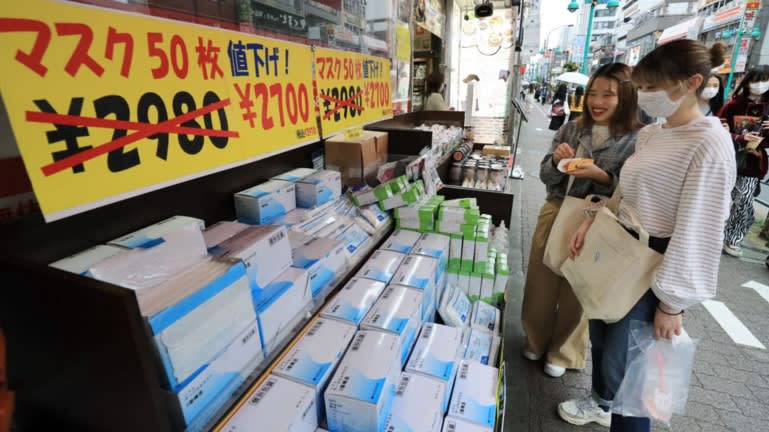 Prices for masks in Tokyo are dropping as the capital starts to resume a semblance of normality. (Photo by Masayuki Kozono)

Prime Minister Shinzo Abe declared an end to the coronavirus emergency for Tokyo, three surrounding prefectures and the northern prefecture of Hokkaido on Monday, claiming that the virus had been contained just a month and a half after the declaration.

The stock market cheered the end of the state of emergency, sending the Nikkei Stock Average 2.6% higher to its highest close since March 5, amid hopes for a pickup in economic activity. But people remain unconvinced, with uncertainty about the economy and their own livelihoods darkening moods in the capital.

During the seven-week emergency that started on April 7, schools, department stores, shopping malls and movie theaters were closed. Many citizens worked from home during the week and stayed in on weekends. Restaurants and bars either shut their doors or switched to takeout only, for shorter hours. In Ikebukuro, the Louis Vuitton store has reopened, but the manager of Le Coq Roti, a French bistro on the west side, said the lunch hour was still as slow as during the voluntary lockdown. Now that the city government is allowing establishments to keep normal hours, however, he expects business to pick up in the evenings.

Schools, gyms and museums are to reopen in the first phase, while restaurants will be allowed to remain open until 10 p.m., rather than 8 p.m. In the second phase, retail stores handling nonessential items will reopen, along with cram schools, theaters and fitness clubs. The third stage will involve reopening confined spaces such as internet cafes, game arcades, pachinko parlors, and karaoke bars. Some nonessential businesses like this Tokyo bowling alley reopened on May 26. (Photo by Arisa Moriyama)

In the western Tokyo suburb of Koenji, Seiko Matsumoto runs a small pub. It used to be open only in the evening, but since the voluntary nighttime ban was imposed on April 7, she has had to open during the day, offering lunch and lunchboxes. She had two eat-in customers on Monday, and just one on Tuesday. And despite the nighttime ban being lifted, she will keep the pub open during the day until her regular evening business picks up.

In the shopping and entertainment district of Shibuya, Yasunobu Ota put up a notice that his Chinese and Italian restaurants will reopen on June 1. Still, Ota said he does not expect customers to flock back. "We'll first start lunch, then depending on customer traffic, will resume evening service." Ota's restaurants started selling lunchboxes on Monday, but sales hardly affect his bottom line. "I'm hoping they'll at least help advertise the business," he said.

Life is somewhat better for children, whose playgrounds have been shut since the declaration. On Tuesday, playgrounds located in Komazawa Olympic Park finally reopened. As soon as the barricades went down, kids jumped on swings and climbed on monkey bars. "I couldn't wait to play," said a seven-year-old boy. "Just running was boring." The wraps come off a playground that was closed since the state of emergency was declared. (Photo by Kosaku Mimura)

In the city of Chiba east of Tokyo, elementary schools partially reopened on Tuesday for first- to third-graders. "I'm really happy to see my friends," said a second-grader as she entered the grounds, greeted by teachers with a sign reminding kids of social-distancing. "It was a long downtime," the principal said. "I'm really glad that I can meet the children again, but I'm nervous too. This is no time to relax."

The pandemic may have indelibly changed businesses.

At a cram school in Ikebukuro, one-on-one lessons take place with student and teacher separated by a plastic curtain. The instructor wears a mask and a face shield. "We want to make sure there won't be any [virus] outbreaks," said the operator, Shigeki Hirano. Japan's ubiquitous cram schools open with a new look, one that may remain for some time. (Photo by Kai Fujii)

The early morning rush at Tokyo Station was over by 9 a.m. as a 49-year-old woman from Shizuoka rushed to meet her daughter living alone in Tokyo. She had not seen her since the advisory against traveling between prefectures. "My daughter told me not to come because she was worried about infection," the woman said. "I'm glad I am finally able to see her again."

At a Sapporo train station in northern Japan, there was hardly a change in traffic. Hokkaido, a popular tourist destination, has been under the emergency declaration longer than other prefectures. The alert was lifted in March only to be reimposed in April. Fears about the virus are naturally stronger.

A teenage couple on a station bench expressed the frustrations of what many in Hokkaido feel. "We're together for the first time in a month," the boy said. His companion replied, "I want to go to karaoke. Maybe we should go home and just sing quietly."