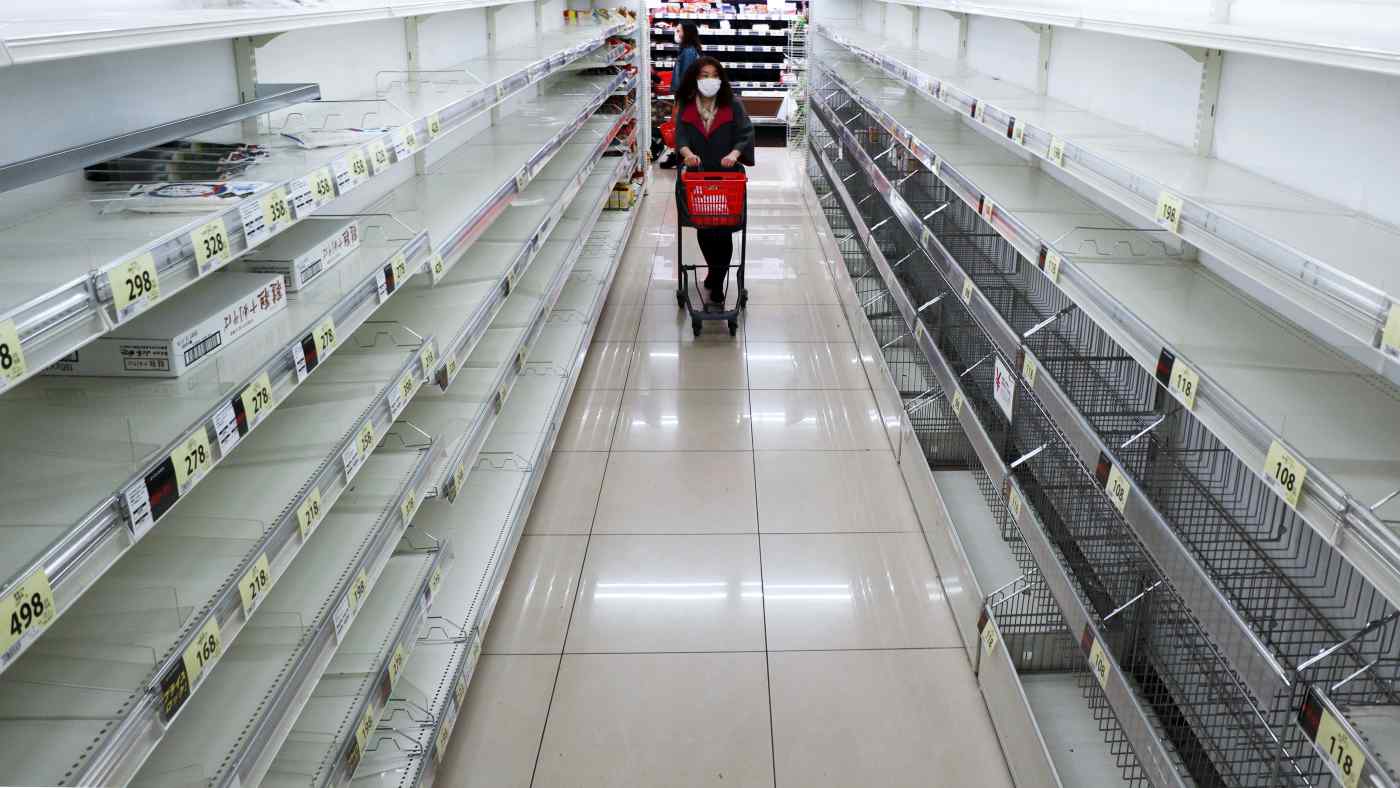 TOKYO -- Japanese consumers rushed to stock up on food and essential goods as uncertainty mounted about a possible Tokyo lockdown to try to stem a rise in coronavirus cases.

At grocery stores and markets, shoppers left shelves bare. "I thought it would be best to stock up because we don't know what could happen," said a woman at Nikuno Hanamasa, a wholesale market in Tokyo's central Chuo Ward. "I have two kids and am afraid there won't be enough to eat if there is a lockdown."

Another man at the market said he had seen late night "chaos" at the supermarket. "It was past midnight but there were so many people. Bread, rice, and the freezer section were completely empty," he said.

United Super Markets Holdings, which operates the Maruetsu, Kasumi and MaxValu supermarket chains, with a combined 162 shops across the Tokyo area, said it had dispatched office staff to its stores to restock shelves and cope with the flow of shoppers. And retail group Aeon said it was ramping up orders after "an unexpected surge in demand."

Both retail groups also said they were experiencing a surge in online orders.

"Consumers have to calm down," said one supermarket executive. "The situation is different from face masks, and there is enough food for everyone."

The buying was spurred after Japan's government and local authorities sharpened their tone over the dangers of the new coronavirus and asked people not to go out this weekend, warning that there could be an explosive increase in cases unless citizens cooperated. Shelves and racks at a Tokyo supermarket were wiped clean on March 26. (Photo by Ken Kobayashi)

While no lockdown of the type seen in other cities across the world has been decreed, Prime Minister Shinzo Abe set up a special coronavirus headquarters on Thursday that allows him to declare a state of emergency if the spread of the virus poses "grave danger" to lives or threatens serious economic damage. Abe would also be able to determine the scope and duration of any lockdowns.

The spread has accelerated, especially in the capital. On Thursday, the Tokyo region reported more than 40 new cases for a second day in a row, bringing the capital's total infections to around 260.

Abe's move to set up the headquarters followed a news conference by Tokyo Gov. Yuriko Koike on Wednesday during which she warned that the metropolis might be forced into lockdown. "We are in a critical phase," she said.

The metropolis has also asked neighboring prefectures such as Kanagawa and Chiba to urge its citizens to not journey into the capital for nonessential and nonurgent purposes.

Consumers are likely to stay home this weekend as department stores and even cinemas plan to temporarily closures. Department store operator Takashimaya will close its stores in Shinjuku, Nihonbashi and Yokohama on Saturday and Sunday. Tokyu Department Store said it would cut opening hours of food sections and completely shut down all other floors at certain locations in the Tokyo and Kanagawa areas.

Shibuya 109, a shopping mall normally crammed with young people, will also close this weekend, while movie theater operator Toho Cinemas will close cinemas in the capital and neighboring prefectures for the weekend.

Skylark Holdings, one of Japan's biggest family restaurant operators, announced on Thursday that it would close nearly 300 stores around Tokyo at midnight during the weekend. The company also manages the Gusto and Bamiyan chains that usually operate late into the night.

Zensho Holdings, the operator of famous beef bowl chain Sukiya, will also shorten its weekend opening hours at about 30 of its restaurants located in Tokyo. The stores will close at 10 p.m.