Capital confirms 34 new cases, many linked to bars, as schools and stores reopen TOKYO -- New coronavirus cases in Japan's capital surged past 30 on Tuesday, one day after schools, shopping malls and gyms were allowed to reopen, prompting the Tokyo Metropolitan Government to issue its first alert under a new warning system.

While the alert does not immediately reverse the recent easing of restrictions on businesses and public activity, it does call on Tokyoites to avoid unnecessary trips outdoors as a preventive measure.

"I am asking the people of Tokyo once again for their cooperation to keep this wave from rising further," Gov. Yuriko Koike told reporters after a meeting of her coronavirus task force.

"While vigilance remains necessary, we want to strike a balance between prevention and economic and social activity," Koike said earlier at the meeting.

Tokyo was among the last regions in Japan to exit from a nationwide coronavirus state of emergency. After Prime Minister Shinzo Abe ended the emergency declaration ahead of schedule late last month, Tokyo adopted its own criteria for issuing alerts, fearing the a second wave of infections -- a risk that has also confronted other cities, including Seoul. 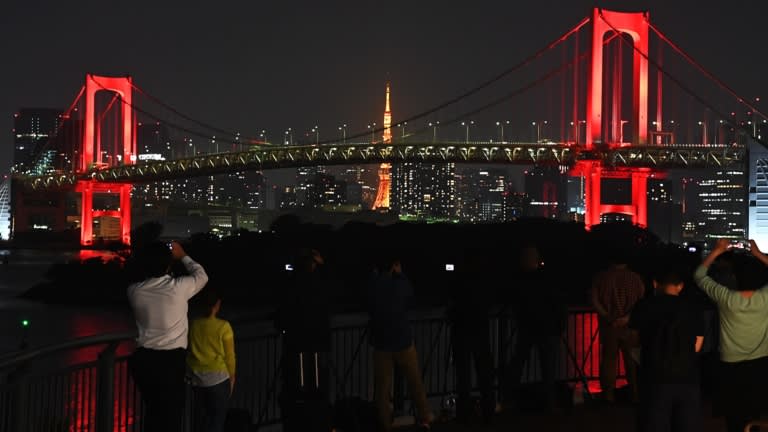 Tokyoites watch as the Rainbow Bridge is lit up in red in response to the coronavirus alert on June 2. (Photo by Takaki Kashiwabara)

The metro government confirmed 34 new cases Tuesday, up from 13 on Monday. Two of the capital's biggest landmarks -- the Tokyo government's main building in Shinjuku and the Rainbow Bridge on the waterfront -- were lit up in red in response to the alert.

The number of new daily infections in Tokyo began to sharply increase at the end of March, reaching a peak of 206 on April 17. By the middle of May, the capital was recording fewer than 10 new daily cases. But later that month the number began to head back up.

The metro government says 20- and 30-somethings are at a particularly high risk as some residents in this age group have been tempted to stay out late in nightlife districts. Of the 114 new coronavirus patients in the week through Tuesday, 32 had been in central Tokyo late at night.

Tokyo's alert criteria include when daily cases average 20 or more for seven days in a row, when officials cannot confirm the infection route for over 50% of new cases, and when the weekly number of cases increases.

If the number of infections rises after an alert is issued and if new daily cases average more than 50 during the most recent week, the metro government will again ask restaurants and retailers to close or shorten their opening hours. Such a request will also be made if the transmission route is unknown in 50% of new cases or if the number of weekly confirmed cases doubles.