Trump leaves hospital, but doctor says he is not 'out of the woods' 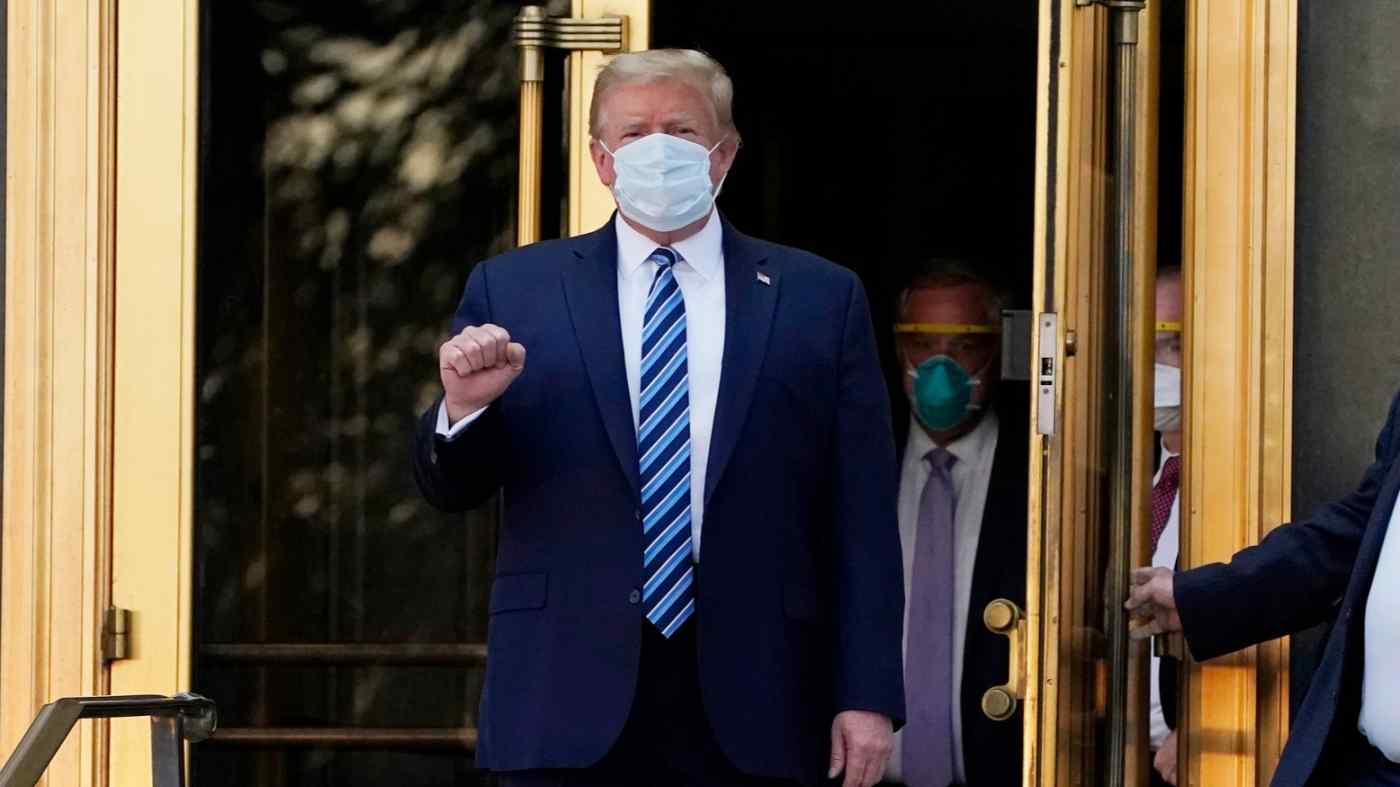 Emerging from the hospital's main entrance at 6:38 p.m., Trump walked pass the press corps, giving multiple thumbs-ups before entering a car. After a short drive, Trump got in the Marine One helicopter, en route to the White House.

Arriving at the White House, the president walked up the stairs, removed his mask, and saluted Marine One as it left.

Ahead of the discharge, Trump tweeted that he would return to the campaign shortly.

"Will be back on the Campaign Trail soon!!! The Fake News only shows the Fake Polls," he wrote, referring to recent polls that show him up to 14 points behind his Democratic opponent, former Vice President Joe Biden.

Earlier in the day, he had tweeted: "I will be leaving the great Walter Reed Medical Center today at 6:30 P.M. Feeling really good! Don't be afraid of Covid. Don't let it dominate your life. We have developed, under the Trump Administration, some really great drugs & knowledge. I feel better than I did 20 years ago!"

"It's been more than 72 hours since his last fever," Conley told reporters. "Though he may not entirely be out of the woods yet, the team and I agree that all our evaluations and, most importantly, his clinical status, support the president's safe return home where he will be surrounded by world-class medical care 24/7."

Trump received his third dose of Remdesivir on Monday, according to the medical team, who also said that his oxygen levels are normal. The president will receive a fourth dose before his discharge.

Since his admittance to Walter Reed, Trump has been administered several drugs including Remdesivir and an experimental treatment from New York-based company Regeneron as well as dexamethasone, a steroid typically given to patients with a severe case of COVID-19.

"We are in a bit of uncharted territory when it comes to a patient that received the therapies he has so early in the course," Conley said.

Despite feeling "really good," Trump will continue to receive care -- including a fifth dose of Remdesivir scheduled for Tuesday -- after leaving the hospital.

"We're looking to this weekend," the White House physician said. "If we can get through to Monday with him remaining the same or improving -- better yet -- then we will all take that final deep sigh of relief."

The White House physician stirred confusion Saturday when describing Trump as in good condition while dodging key questions such as whether he had received oxygen, seemingly contradicting the president's chief of staff, Mark Meadows, who later signaled a more worrisome outlook. On Sunday, Conley said he "didn't want to give any information that might steer the course of illness in another direction."

Also on Sunday, the president said in a video posted to Twitter that he has "learned a lot about" COVID-19. Trump went outside the hospital in a limousine to greet his supporters, an act criticized by many as irresponsible given the disease's highly infectious nature.

Asked by reporters whether the drive was safe, Conley said: "The president has been surrounded by medical and security staff for days wearing full PPE," referring to personal protective equipment. "Yesterday, U.S. Secret Service agents were in that same level of PPE for a very short period of time."

When asked whether Trump would return to the Oval Office, Conley said, "We're going to do whatever it takes for the president to safely conduct business ... within the residence and White House."

Biden has released his own COVID-19 test results daily after Trump's illness was revealed. His results have been negative, despite Biden sharing a debate stage with Trump last week.