Governor and president at odds over reopening economy 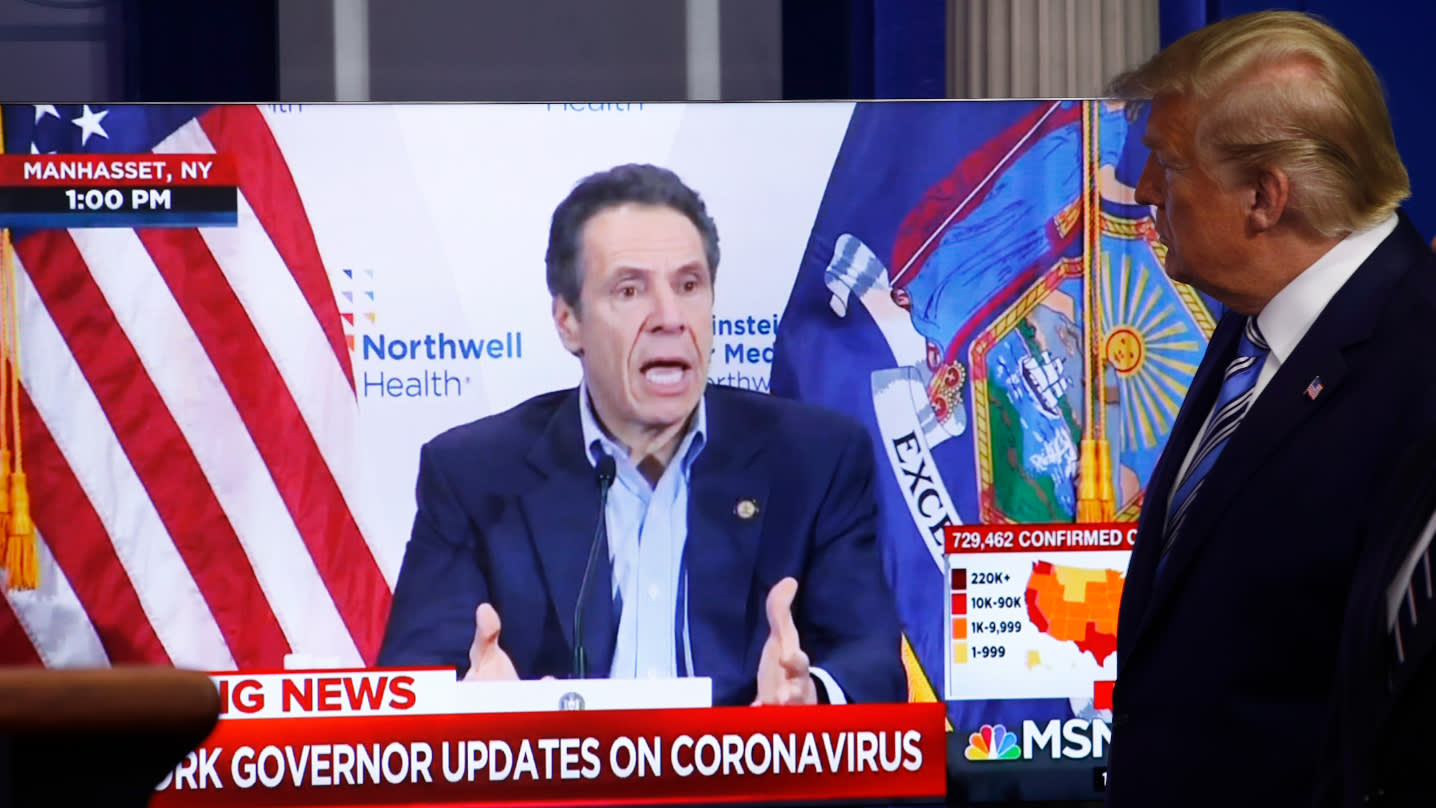 NEW YORK -- The federal government will work with New York to ramp up the hard-hit state's testing capacity as it seeks a road to recovery via extensive antibody screening, U.S. President Donald Trump said Tuesday after meeting with Gov. Andrew Cuomo at the White House.

"I had a very productive meeting with Gov. Cuomo ... to discuss his statewide testing strategy and how we can work together to help expand it with the goal of doubling testing in the next few weeks," Trump said at the daily White House coronavirus briefing.

"The federal government will work along with the state on the national manufacturers and distributors," Trump said, expressing a hope that this model will work with other states as well.

The Food and Drug Administration has authorized more than 50 diagnostic tests, Trump said, including one that patients can take home.

Trump's commitment to cooperation with New York came after Cuomo called on the federal government for help in its effort to expand testing.

"I agree with the federal government's position" that states should be in charge of testing, but "where it gets hard is when the labs that I regulate say, 'The manufacturers are the problem,'" Cuomo said earlier Tuesday before heading down to Washington.

"That piece is where the federal government can help us," said Cuomo, who called on it to "figure out South Korea and China and international supply issues, rather than have 50 states now figure out ... how to buy tests in South Korea."

New York state, now on a descent from its coronavirus apex, accounts for roughly a third of confirmed cases in the U.S. Its count topped a quarter million Tuesday, including more than 18,000 deaths, less than two months after its first case was reported.

The state is starting to plan its reopening by region. But "planning the reopening is just that -- plan the reopening," Cuomo warned Tuesday. Last week, he extended the state's stay-at-home order to May 15.

As New York state prepared for the apex, Cuomo repeatedly criticized the federal government as slow to provide hard-hit states with personal protective equipment and ventilators.

Republican leader Trump has fired back, tweeting that the Democratic governor should "Stop talking!" and accusing the state of being unprepared.

The two men have also sparred over when to unfreeze the economy and who can make such a decision. After Trump claimed April 13 that "when somebody's the president of the United States, the authority is total" over states on this matter, Cuomo was quick to point out that the president is not a king and to warn of more deaths should lockdowns end prematurely. Legal scholars said the federal government lacks the authority to make states lift such measures.

His remarks came in apparent response to protests calling for an immediate reopening in such stay-at-home states as Michigan.

Trump tweeted "LIBERATE MICHIGAN!" this past Friday in a move seen as encouraging protests against the state's lockdown, despite having reportedly told governors the day before that they would decide when to open their states back up for business.

Michigan has more than 32,000 confirmed COVID-19 cases and a death toll of at least 2,700 -- higher than even California, the most populous state and one of the first to record a coronavirus case.

Dr. Deborah Birx, a health official on the White House coronavirus task force, said that the Detroit metropolitan area, the epicenter of Michigan's outbreak, "is doing quite well with significant declines," and that such other hot spots as New Orleans, Louisiana, are improving.