Trump tests negative for coronavirus after risk of exposure

US to expand travel ban to UK and Ireland from Monday The president agreed to being checked Friday amid growing concerns that he had been in contact with individuals who have tested positive for the virus.

In a memorandum released to reporters, Physician to the President Sean Conley, a U.S. Navy Commander, said that he had received confirmation that the test is negative.

Trump had resisted such tests for days. He told reporters Saturday at a press conference that his temperature was "totally normal."

But while meeting with Brazilian President Jair Bolsonaro last week, he came in close contact with another Brazilian official who has since tested positive and concerns had been mounting.

"One week after having dinner with the Brazilian delegation in Mar-a-Lago, the president remains symptom-free," Conley wrote. "I have been in daily contact with the CDC (Centers for Disease Control and Prevention) and White House Coronavirus Task Force, and we are encouraging the implementation of all their best practices for exposure reduction and transmission mitigation."

The steps taken on Saturday come as the pandemic inches closer to the White House, including members of the first family.

The 73-year-old Trump posed for a photo with Fabio Wajngarten, Bolsonaro's press secretary, last weekend when the Brazilian delegation visited the president's Mar-a-Lago resort in Florida. Wajngarten later tested positive for the coronavirus.

Brazil's acting ambassador to the U.S., Nestor Forster, who dined with Trump at Mar-a-Lago, has also tested positive and is under self-quarantine.

Rep. Matt Gaetz of Florida traveled with the president on Air Force One from Florida to Washington on Monday. Shortly after takeoff, Gaetz reportedly learned that he had been in touch with an infected person at the Conservative Political Action Conference in Maryland late last month and isolated himself in an empty cabin for the rest of the flight.

Rep. Doug Collins of Georgia greeted Trump with a handshake at an airport in Atlanta last week before the two visited the headquarters of the Centers for Disease Control and Prevention. Collins also later learned that he had been potentially exposed at the same CPAC gathering and went into self-quarantine.

Ivanka Trump, the president's daughter, and Attorney General William Barr are also at potential risk as the two recently met with Australia's home affairs minister, who is also confirmed to have COVID-19. 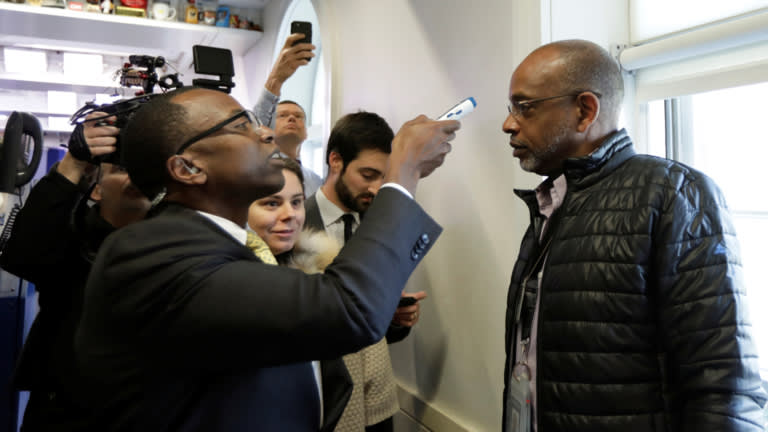 A member of the White House physician's office checks the temperature of a reporter before Trump and members of the Coronavirus Task Force conducted a press briefing at the White House on Saturday.   © Reuters

At the press conference, Vice President Mike Pence announced that the U.K. and Ireland will be added to the travel ban.

Pence, who is running the White House's response to the outbreak, said the administration was extending travel restrictions as of midnight Monday. The restrictions were first imposed on China and expanded Friday to continental Europe.

U.S. citizens and legal residents will still be able to return home and will be funneled through certain airports, the vice president said.

When asked about potential bans on domestic travel, Pence said that officials were considering all possible steps.

Meanwhile, the White House has stepped up safeguards regarding individuals coming in close contact with the president and vice president. All White House reporters had their temperatures measured before entering the briefing room on Saturday, and one reporter was refused entry.

Pence's press secretary tweeted that the rejected reporter's temperature was taken three times over a 15 minute period, and all three registered above 38 degrees Celsius.

"Out of an abundance of caution, temperature checks are now being performed on any individuals who are in close contact with the president and vice president," White House spokesperson Judd Deere said in a statement to reporters on Saturday.

The moves come a day after Trump declared a national emergency over COVID-19 and as schools, landmarks and sporting events are closed across the nation and companies are shifting to working from home.

The top U.S. infectious diseases expert, National Institute of Allergy and Infectious Diseases Director Dr. Anthony Fauci, said the country has recorded 2,226 cases of the new coronavirus, but has not yet reached the peak of the outbreak.