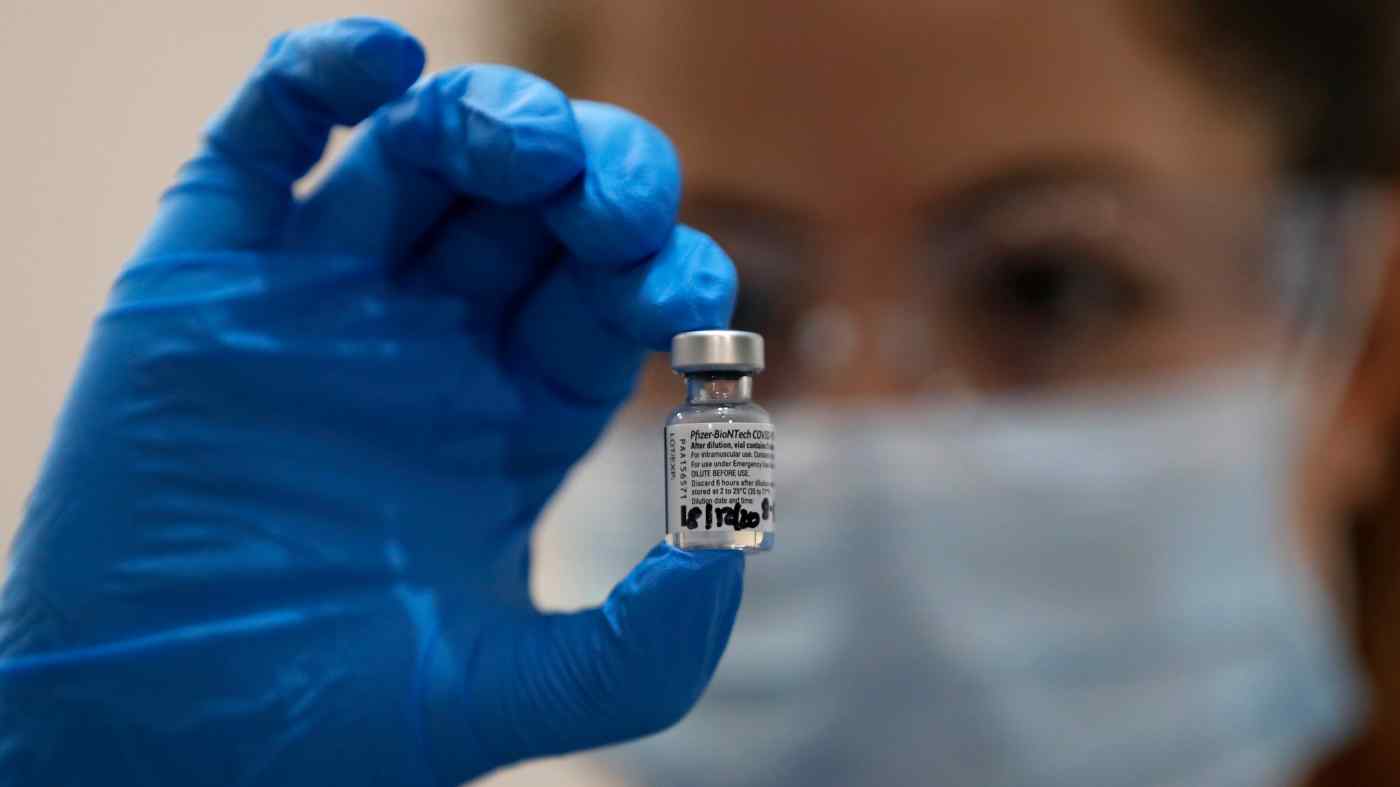 The U.K.'s medicine regulator says anyone with a history of anaphylaxis -- or overreaction of the body's immune system -- to a medicine or food should not get the Pfizer-BioNTech COVID-19 vaccine, revising initial guidance on an earlier allergy warning about the shot that was rolled out in the country on Dec. 8.   © AP
December 9, 2020 20:34 JSTUpdated on December 10, 2020 11:27 JST | Europe
CopyCopied

LONDON (Reuters) -- Britain's medicine regulator said anyone with a history of anaphylaxis to a medicine or food should not get the Pfizer-BioNTech COVID-19 vaccine, giving fuller guidance on an earlier allergy warning about the shot.

Starting with the elderly and frontline workers, Britain began mass vaccinating its population on Tuesday, part of a global drive that poses one of the biggest logistical challenges in peacetime history.

The Medicines and Healthcare Products Regulatory Agency (MHRA) said there had been two reports of anaphylaxis and one report of a possible allergic reaction since rollout began.

"Any person with a history of anaphylaxis to a vaccine, medicine or food should not receive the Pfizer BioNTech vaccine," MHRA Chief Executive June Raine said in a statement.

"Most people will not get anaphylaxis and the benefits in protecting people against COVID-19 outweigh the risks... You can be completely confident that this vaccine has met the MHRA's robust standards of safety, quality and effectiveness."

Anaphylaxis is an overreaction of the body's immune system, which the National Health Service describes as severe and sometimes life-threatening.

The fuller guidance, clarifying that the main risk was from anaphylaxis specifically, was issued after consulting experts on allergies. The MHRA had initially advised anyone with a history of a "significant allergic reaction" not to take the shot.

Pfizer and BioNTech said they were supporting the MHRA's investigation.

Last week, Britain's MHRA became the first in the world to approve the vaccine, developed by Germany's BioNTech and Pfizer, while the U.S. Food and Drug Administration (FDA) and European Medicines Agency (EMA) continue to assess the data.

A top U.S. official said on Wednesday that Americans with known severe allergic reactions may not be candidates for Pfizer's COVID-19 vaccine until more was understood about what had happened.

Canada's health ministry said it would look at the reported adverse reactions in Britain, but said adverse events were to be expected and would not necessarily change the risk/benefit of the shot, after the country approved the vaccine.

MHRA chief Raine told lawmakers such allergic reactions had not been a feature of the Pfizer's clinical trials.

Pfizer has said people with a history of severe adverse allergic reactions to vaccines or the candidate's ingredients were excluded from their late stage trials, which is reflected in the MHRA's emergency approval protocol.

However, the allergic reactions may have been caused by a component of Pfizer's vaccine called polyethylene glycol, or PEG, which helps stabilize the shot and is not in other types of vaccines.

Imperial College London's Paul Turner, an expert in allergy and immunology, who has been advising the MHRA on their revised guidance, told Reuters: "As we've had more information through, the initial concern that maybe it affects everyone with allergies is not true."

"The ingredients like PEG which we think might be responsible for the reactions are not related to things which can cause food allergy. Likewise, people with a known allergy to just one medicine should not be at risk," Turner told Reuters.

The EMA said in an email that all quality, safety and efficacy data would be taken into account in assessing the vaccine, including data generated outside the EU.

In the United States, the FDA released documents on Tuesday in preparation for an advisory committee meeting on Thursday, saying the Pfizer vaccine's efficacy and safety data met its expectations for authorization.

The briefing documents said 0.63% of people in the vaccine group and 0.51% in the placebo group reported possible allergic reactions in trials, which Peter Openshaw, professor of experimental medicine at Imperial College London, said was a very small number.

"The fact that we know so soon about these two allergic reactions and that the regulator has acted on this to issue precautionary advice shows that this monitoring system is working well," he said.

However, Gregory Poland, a virologist and vaccine researcher with the Mayo Clinic in Rochester, Minnesota, said that the MHRA and NHS had overreacted initially.

"I would not have broadened to the degree they did," he said.

"It's reasonable to let the world know about this, and to be aware of it in terms of people who have had reactions like this to vaccines. I think to say medicines, foods or any other allergies is past the boundary of science."