US stocks dive a daily record 1,190 points on coronavirus fears The Dow Jones Industrial Average shed 1,190 points, or 4.4%, to close at 25,766 in the biggest single-day point decline ever. The S&P 500 closed down 4.4%, while the Nasdaq Composite slid 4.6%. All three indexes closed down more than 10% from recent highs, meaning that they are now in a correction.

The tumble marked the fourth straight day of stock losses this week. U.S. President Donald Trump's assurances on Wednesday that the U.S. is "in great shape" and that his administration is "totally prepared" to contain the virus apparently did little to ease volatility. Trump also announced that he was appointing Vice President Mike Pence to lead federal efforts to contain the spread.

The U.S. State Department on Wednesday issued a level 3 "reconsider travel" advisory for South Korea, where cases have surged past 1,700, while Japan requested a monthlong schools closure to prevent further spread. 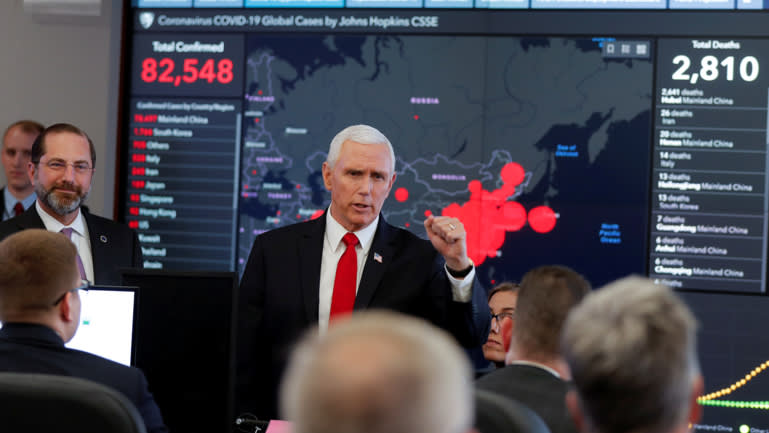 The Centers for Disease Control and Prevention has warned of the inevitability of the coronavirus's wider spread in the U.S., a notion Trump disputed at a Wednesday news conference at the White House. The conflicting responses have sparked worries about American readiness.

While the U.S. has reported only 15 cases of the virus, excluding those repatriated from China and the Diamond Princess cruise vessel, public health experts warn that labs lack the capacity for large-scale testing.

The country saw its first possible case of community spread Wednesday. A newly diagnosed patient in California is believed to have no recent travel history to China or known exposure to another patient.

Gov. Gavin Newsom said Thursday that 33 people had tested positive for the virus there but five had since left the state. He added that California health officials are monitoring 8,400 people for coronavirus symptoms after their arrival on domestic commercial flights but the state had only a limited supply of test kits.

The outbreak in China, which has made it difficult for factories to get back up and running, has already taken a toll on American businesses. Corporations including Apple and HP warned of missed or lower quarterly guidance, while Microsoft said its personal computing business will likely miss its target. Also on Thursday, California-based Facebook announced that it will cancel this year's F8 developers conference, scheduled for May.

A flash survey published Thursday by the American Chamber of Commerce in China shows nearly half of responding companies expect 2020 China revenue to decrease if business cannot get back to normal in two months.