Vietnam Prime Minister Pham Minh Chinh convened an urgent online meeting with the authorities in Bac Giang and Bac Ninh on Wednesday to try to curb the spread of COVID-19 in the two provinces which are home to many manufacturers, including Samsung Electronics and Canon. (Source photos by EPA/Jiji and Reuters)
TOMOYA ONISHI, Nikkei staff writerMay 27, 2021 18:34 JST | Vietnam
CopyCopied

HANOI -- Vietnamese Prime Minister Pham Minh Chinh is urging his government to focus on controlling the spread of COVID-19 in Bac Giang and Bac Ninh as a top priority, as the two provinces which are home to key industrial zones remain at "very high risk."

Chinh said the two provinces form the "fortress to counter the epidemic for the whole country" and that the government's "highest goal" should be on quelling the spread in the two provinces.

The prime minister convened an urgent online meeting on Wednesday with Bac Giang and Bac Ninh local authorities and health departments. He called for coordinated measures to contain the virus under the direction of Deputy Prime Minister Vu Duc Dam, who is head of the national steering committee.

In Bac Giang, four industrial parks out of six were forced to shut down on May 18 after more than 320 cases were found since April 27. Bac Ninh province has also locked down some locations and imposed social distancing measures at others.

Workers at companies including Samsung Electronics and Canon had tested positive for COVID at the end of April. Vietnam has been battling another wave of COVID since. 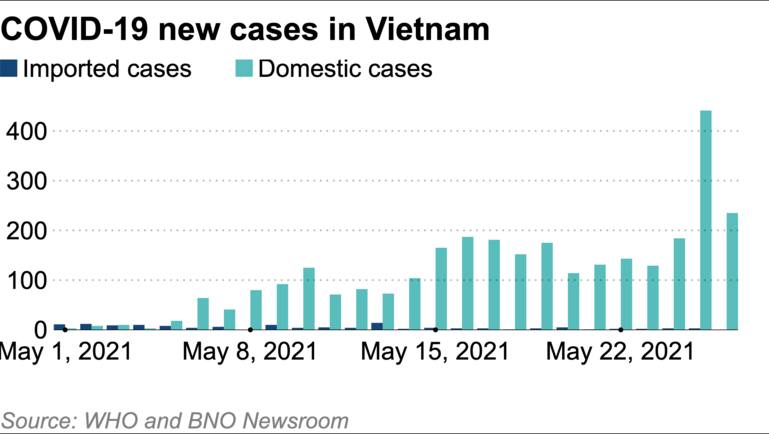 The two provinces are at the heart of Vietnam's manufacturing hub and play a key role as the economic engine of the communist-led country. Samsung's two plants in northern Vietnam handle more than half the company's global smartphone output. Bac Giang has more than 240,000 workers and Bac Ninh around 330,000.

"Mobilize all forces to help Bac Giang and Bac Ninh to combat the epidemic in order to pursue the dual goal of maintaining production and avoiding supply chain disruption at the industrial parks, especially Samsung-related facilities," the prime minister said in the meeting.

The dual goals refer to sustaining economic growth while containing the pandemic, priorities Chinh inherited from the previous leadership when he came to power in April.

"We will support and strictly comply with the Vietnamese government's policy to curb the spread of COVID-19 in the regions, and hope that our supply chain in Bac Giang province will be normalized," a representative at Samsung's local unit told Nikkei Asia on Thursday.

Meanwhile, 13 of Samsung's local vendors based in Bac Giang are expected to resume operations on Friday, according to documents released by the province. They were forced to shut down by authorities on May 18.

Le Anh Duong, chairman of the People's Committee of Bac Giang, said the province is mulling measures to reduce the density of factory workers in concentrated areas. Around 17,200 manufacturers are based in Bac Giang and Bac Ninh, according to the Ministry of Planning and Investment.

Authorities are blaming more transmissible variants for the outbreaks. The National Institute of Hygiene and Epidemiology said the variant B.1.617.2, a strain first detected in India, was present in all samples taken from Bac Ninh and Bac Giang.

Chinh blamed management at two hospitals in the capital of Hanoi for letting the virus leak out to the community and has asked authorities to hold them responsible for dereliction of duty.

On the prime minister's direction, authorities will accelerate vaccinations in the northern provinces. The Ministry of Health said it would allocate 150,000 doses of vaccine each to Bac Giang and Bac Ninh, aiming to complete the inoculation program which will cover workers in the two provinces within two weeks, Health Minister Nguyen Thanh Long told the online meeting on Wednesday.