HANOI -- Vietnam is now counting on support from religious groups to help Ho Chi Minh City through its worsening COVID-19 outbreak, a sign of desperation from the Communist Party of Vietnam-led government that rarely hobnobs with the old foe of Marxism.

More than 1,000 Catholic nuns and priests as well as Buddhist monks with medical skills have taken part in a government program to combat the pandemic as the death toll rises sharply in the country's largest city.

On Monday more than 7,000 new cases were recorded across the nation, with 4,264 of them in Ho Chi Minh City, which is also the country's main economic engine.

Historically, communism and religion -- "the opiate of the masses," according to Karl Marx -- have been at odds. But in Vietnam, the party and religious groups have long maintained delicate relations, with some sects having flocks comparable in size to the party's membership.

The Church in Vietnam has an estimated 7 million Catholics, including 30,000 priests, clergymen and nuns. The Communist party has over 5 million members, and there are 5 million Buddhists in Vietnam. 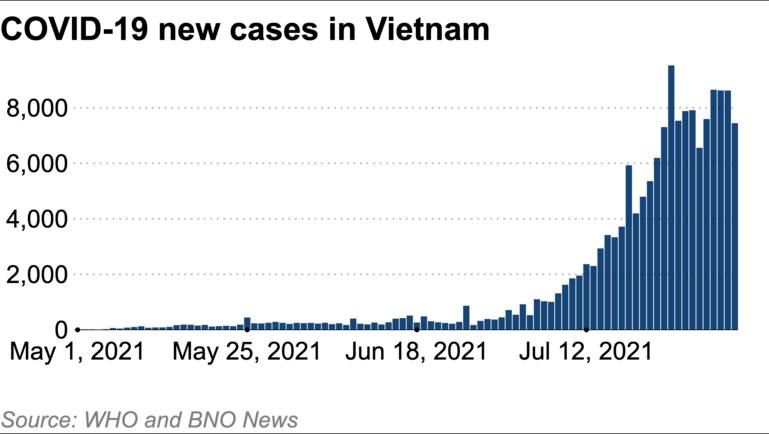 The Catholic Churches participating in the program to rescue Ho Chi Minh City is led by the Roman Catholic Archdiocese of Saigon, with around 1 million believers. Saigon is the old name of Ho Chi Minh City, a Catholic stronghold in Vietnam.

"The participation of religious organizations would be a source of timely support," said To Thi Bich Chau, chairwoman of Vietnamese Fatherland Front Committee of Ho Chi Minh City, a local group under the communist party. The statement, which came on July 22, was a rare display of party gratitude to the country's religious institutions.

She urged all classes in the city, religious organizations, clergymen, monks and followers of all religions to register to serve in hospitals and in isolated areas.

The religious support also has a spiritual aspect as the monks, nuns and priests help patients to cope and regain their confidence, according to state-owned media.

Chau said the religious volunteers' work will be replicated and promoted to a great extent as the country mobilizes its spiritual and material strength to help Ho Chi Minh City win its fight against the mutating virus.