A woman and her son stop to pray in front of a closed church during the outbreak of the coronavirus disease in Ho Chi Minh City.   © Reuters
TOMOYA ONISHI, Nikkei staff writerAugust 20, 2021 21:58 JST | Vietnam
CopyCopied

HANOI - Vietnam authorities are deploying forces including the army to deal with COVID-19 outbreaks in the economic hub of Ho Chi Minh City and provinces in the south, ahead of the arrival of U.S. Vice President Kamala Harris, as deaths from the virus spiral.

Residents in those areas are required to "stay where they are" from Aug. 23, said Pham Duc Hai, deputy head of the city's steering committee for COVID-19 prevention and control, at a press conference on Friday.

Details of the operations are yet to be announced. "The plan will include the deployment of specific forces or troops," said Phan Nguyen Nhu Khue, head of the propaganda department of the municipal party committee.

It is understood that forces will be deployed to provinces including Dong Nai and Binh Duong, home to key factories operated by multinational companies including South Korea's Hyosung, Thailand's CP Group, Singapore's New Motion and Taiwan's Formosa and Polytex Far Eastern.

Ho Chi Minh City and its surrounding provinces form the economic engine of the country. Ho Chi Minh City alone accounts for 22.3% of the nation's gross domestic product and contributed 27.5% to the state budget in the 2011-2019 period.

Ho Chi Minh City has set up about 200 special task forces, comprising the military, public security forces, and the border guards to double down on implementing social distancing measures and to provide food and necessary support to residents under quarantine, according to state media.

The government, however, stopped short of calling the move the implementation of martial law although the deployment of such forces was widely seen as taking the toughest measures available to a government.

Ho Chi Minh authority held a press conference on Friday for just 10 minutes without taking any questions from media, saying the city will apply these tough measures in hopes of controlling the situation by Sept. 15. 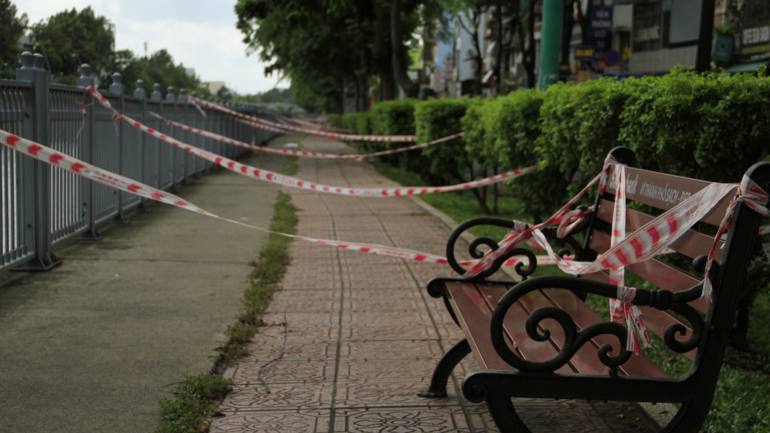 A cordoned-off sidewalk in Ho Chi Minh City, which has been battling a surge in COVID infections and deaths. (Photo by Kim Dung Tong)

Vice President Harris is making her first visit to Asia this weekend with planned stops in Singapore and Vietnam.

Ho Chi Minh City said on Friday 167,717 people had contracted COVID-19 since April 27 and 5,939 have died. The city of 13 million has undergone a series of social distancing orders since May 31, along with a night curfew since July 26.

To deal with Ho Chi Minh City's rising death toll which is averaging at around 240 daily, the military has taken over the cremation of bodies. Some believe that the death numbers are higher, as overwhelmed facilities are not keeping an accurate count.

The deployment also comes as COVID hit factories located in Dong Nai and Binh Duong. Workers in the two provinces, mostly migrants from the central and highland regions of Vietnam, have been confined to their factory premises, unable to return home since the end of April when the current wave of COVID started to spread. With the rising death toll, these workers have been put under even tighter control since July.

A local political analyst said: "The prime minister has effectively declared a state of emergency in Ho Chi Minh City and provinces, using his expanded power to take necessary measures without the approval of the National Assembly."

Vietnam's National Assembly in July approved a resolution to give the prime minister and the government power to make swift decisions during the pandemic, in a bid to bring the coronavirus outbreak under control.