Ho Chi Minh City is on high alert after a hospital developed a COVID-19 cluster in which more than 50 health care workers contracted the virus despite being vaccinated.(Source photos by Reuters and Getty Images)
TOMOYA ONISHI, Nikkei staff writerJune 15, 2021 19:01 JST | Vietnam
CopyCopied

HANOI -- Ho Chi Minh City, Vietnam's southern commercial hub, is on high alert after a hospital developed a COVID-19 cluster in which more than 50 health care workers contracted the virus despite being vaccinated.

Local authorities on Monday said 55 workers at the Ho Chi Minh City Hospital for Tropical Diseases, a state-run institute, had tested positive. "All of them had taken two jabs [of AstraZeneca vaccine] before testing positive," said Nguyen Van Vinh Chau, the director of the hospital. Staffers at the hospital were among the first groups to have been vaccinated in Vietnam, getting their second doses by the end of April.

"All of the patients were quarantined at the hospital while they remained asymptomatic. They don't have COVID-19 symptoms such as fever, cough, sore throat, loss of taste, loss of smell. They are psychologically stable," Chau told local media.

The viral load in the infected employees was "extremely low," Chau said. Vaccinated patients are less likely to get severely ill, and the possibility of spreading the virus to the community is also lower.

The hospital is working with the Oxford University Clinical Research Unit to monitor the clinical progress and viral levels of the positive staffers to assess the effectiveness of the vaccine, he added.

The outbreak came as the country struggles to contain outbreaks in northern two provinces near the capital Hanoi -- Bac Giang and Bac Ninh -- in the heart of supply chains. On Tuesday afternoon, Vietnam reported 188 new cases nationwide, with 97 cases in Bac Giang, 34 in Bac Ninh and 53 in Ho Chi Minh City in the south. The total number of cases since April 27, when the current wave hit Vietnam, reached 7,787. 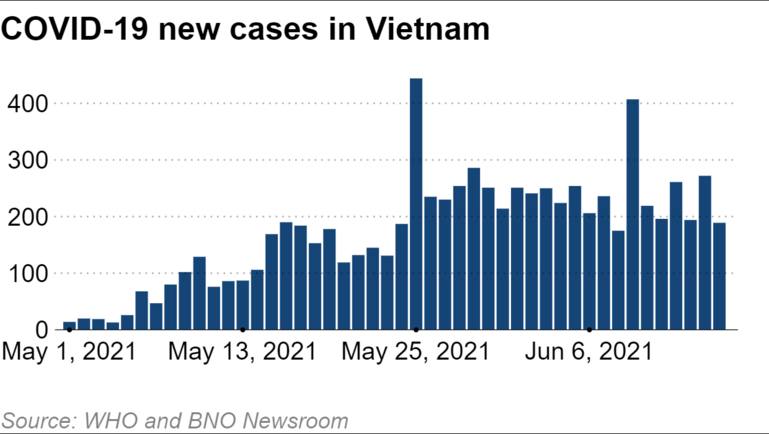 Vietnam's ministry of health said on Tuesday at a meeting with local media that the situation in the northern provinces had basically come under control after authorities imposed strict restrictions at factories. The new cases are mainly isolated or had been detected in the blockaded area, the ministry said, and the situation will improve over the next two weeks.

Although the epidemic has gradually been brought under control nationwide, authorities are concerned about the new outbreaks in Ho Chi Minh as the city continues to detect community outbreaks of the delta variant, a strain first reported in India. The number of cases detected in the city from May 18 to Monday reached 821, according to local authorities. Apart from the city's Hospital for Tropical Diseases, medical staffers at four hospitals have tested positive.

The outbreaks in Ho Chi Minh City are complicated because the city has a high population density and busy commercial activity, with some cases unable to be traced to the source of infection. The city is applying social distancing until the end of this month.

"There is no vaccine with 100% protection rate from infections. However, vaccines can reduce fatality rate," Truong Huu Khanh, head of the infectious diseases department at Children's Hospital 1 in Ho Chi Minh City and an adviser for Vietnam's vaccine system, told Nikkei Asia. By getting a certain level of the population vaccinated as fast as possible, Vietnam will see less loss of lives as well as less economic loss and mental damage, he said.