Restrictions yet to quell pandemic in nation's commercial hub: 5 things to know HANOI -- The extension of the epic COVID-19 lockdown in Vietnam's Ho Chi Minh City until the end of September risks further social and economic costs in the nation's largest city, which despite the harsh restrictions has failed to put the pandemic under control.

City leaders on Wednesday said Prime Minister Pham Minh Chinh approved their proposal to extend the lockdown beyond the original Sept. 15 deadline. Citizens and businesses, including foreign companies, in the metropolis are now in their 109th day of a lockdown that has been in place since May 31.

As coronavirus deaths rose in the city of 9 million people, Vietnam deployed troops on Aug. 23 to enforce tough social distancing measures that require residents to "stay where they are." Hanoi had hoped to control the outbreak in Ho Chi Minh City, the country's economic engine, by Wednesday's deadline.

But the city has failed to meet the criteria for lifting the lockdown. The two-week average of new daily cases must drop continuously from the prior two weeks and be lower than half of the infections in the week with the highest COVID-19 caseload. But new cases have remained around 5,000 to 6,000 over the past few days.

Why is Vietnam, once promoted in Southeast Asia for a relatively efficient handling of the pandemic, struggling to suppress the virus in the country's south? Here are five things to know.

Ho Chi Minh City's short-term case fatality rate stood at 3.69% as of Monday, compared with 2.49% nationally, according to data compiled by Nikkei Asia and Our World in Data. This rate is the ratio of the seven-day average of COVID-19 fatalities to the seven-day average of daily cases 10 days earlier. COVID-19 has been deadlier in the city, even though 18.1% of its residents are fully vaccinated versus 5.15% nationwide as of Saturday. The city's fatality rate exceeds that of neighboring countries, including Cambodia, at 2.59%, and Thailand, at 1.32%.

Cumulative total deaths in Ho Chi Minh City reached 12,476 on Wednesday, accounting for 77% of Vietnam's total. Although the daily average number of deaths decreased 6.5% from the previous week, at least 66 clusters or chains of transmission remain active in the city, the World Health Organization said in its "Vietnam COVID-19 Situation Report," issued Sept. 7.

"We have been facing the most challenging phase of the pandemic," Kidong Park, the WHO representative in Vietnam, told Viet Nam News this week in an interview. 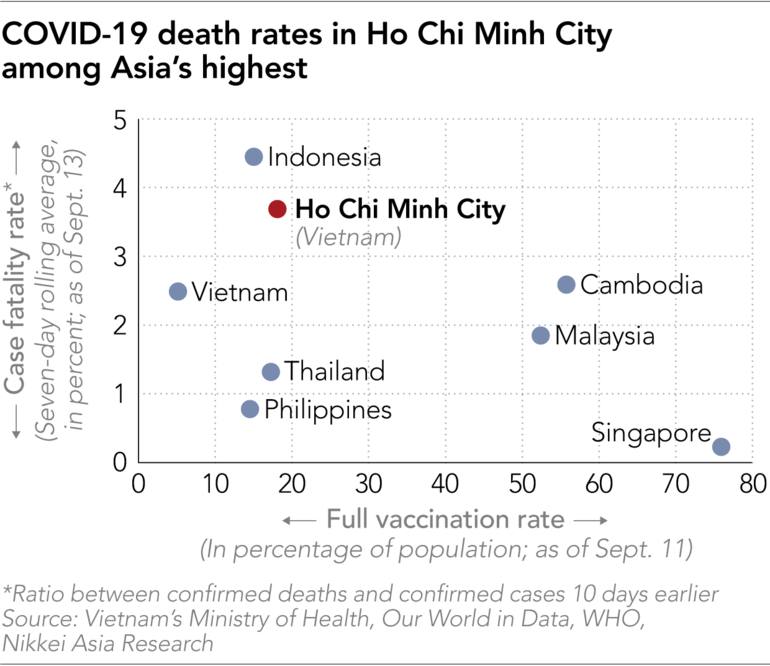 Medical experts are convinced the extent of the pandemic in the city is greater than official reports show.

"I do not know [about the actual mortality in the city], but what I do know is that at the most panic-stricken time, there were many patients dying of COVID-19 at home," Dr. Phan Xuan Trung, a general practitioner at Medic Medical Center in Ho Chi Minh City, told Nikkei Asia. "Some were decided by family members to die at home. Some were dying alone."

Dr. Pham Ngoc Thang, an emergency care physician in Ho Chi Minh City, warned, "There are over 1,000 more patients in serious condition. We should brace for many more deaths in the coming days."

The pandemic has overwhelmed hospitals, putting standard medical treatment on the verge of collapse, experts say.

"Authorities in the city have devoted all medical resources to fighting the pandemic, while completely abandoning the conventional medical field," Trung said. Many patients suffering from cancer, strokes or heart attacks no longer receive treatment, doctors say. Why has the city's harsh lockdown failed to pay off?

The decision to extend restrictions in Ho Chi Minh City has fueled discussion about the lockdown's effectiveness, especially as many citizens face food shortages.

The lockdown covered the entire city but failed to hit the transmission route of the virus, Trung said.

"It is possible to point out places where the virus could easily spread such as airtight offices, narrow houses, narrow alleys, crowded activities, etc.," he said. "If we focus on fighting infection in these places, it will be highly effective."

The lockdown in Ho Chi Minh City could have come too late, said Tuan, the professor of predictive medicine. It "was initiated at the time when the daily cases had already reached more than 200, suggestive that infection had somewhat taken hold in the population."

Tuan also thinks the lockdown could have been hampered by the city's environment.

"The city has a dense population with low income that would be more vulnerable to health impact," he said. "The overcrowded living conditions with lack of sanitation could significantly reduce the effectiveness of lockdown."

"Ho Chi Minh City is a megacity which also houses slums," said Thang, the emergency care physician. "People with poor living standards without savings and a number of elderly people with underlying diseases could be easily affected."

How will the restrictions differ as of Thursday?

The restrictions remain similar. "The directive bans gatherings of more than two people in public and requires all residents to stay indoors and only go outside for appropriate reasons," local media reported on Wednesday.

Ho Chi Minh City intends to relax the restrictions starting in low-risk areas. Authorities intend to address food supplies and other issues exacerbated by the lockdown. The city is encouraging e-commerce platforms to resume service. Given the worker shortage, shippers will be officially allowed to operate between districts.

Authorities vow to enhance the capacity of the healthcare system, including medical centers and pop-up stations.

"COVID-19 is a pandemic with unprecedented consequences on a very large scale," a Ministry of Foreign Affairs official told reporters on Sept. 9, adding that despite the government's and authorities' best efforts, Ho Chi Minh City still faces difficulties.

"However," the official continued, "we also have to see that hundreds of thousands of people have received support from the government, and the authorities have promptly revised, issued and implemented measures to promptly solve these problems."

How are foreign businesses reacting to Vietnam's COVID response?

Nearly 30 South Korean businesses, including Samsung and SK, on Tuesday cited difficulties and obstacles in maintaining supply chains during a meeting with Chinh. Businesses asked the prime minister to support the smooth transportation and circulation of goods while granting work and entry permits for skilled South Korean workers. Worker vaccinations and preferential tax treatment were also on the agenda, state media reported.

"Fire tests [the quality of] gold," Chinh said, citing a Vietnamese proverb in suggesting he wants to bolster economic ties with South Korea even as Vietnam's COVID-19 rates remain high. Chinh also conveyed his desire to bring bilateral trade to the $100 billion range.

But the COVID crisis is hindering foreign operations in Vietnam. Foreign direct investment totaled $19.12 billion from January through Aug. 20, declining 2.1% from the same period in 2020. Newly registered capital increased 16.3% to $11.33 billion, while the number of projects fell 36.8% to 1,135.

If the lockdown is further prolonged, domestic supply chain disruptions will worsen, according to Anh Pham, an independent business strategy adviser based in Ho Chi Minh City. "A protracted lockdown will not only risk more orders being diverted out of Vietnam but also delay new potential FDI inflows," he told Nikkei.

How have Ho Chi Minh City citizens responded to the extension?

Residents vented on social media over the protracted COVID restrictions.

"PLEASE TELL PEOPLE THIS IS THE LAST TIME! I want the Chairman of the People's Committee of Ho Chi Minh City to commit to the people: keeping the social distance until the end of September, this is the final extension," a Facebook post by Nguyen Thien reads. "From Oct. 1, remove all checkpoints, no more directives," he said.

"I am so discouraged, being in the house for over 100 days doing nothing," Thanh Long, a father of two, said on Wednesday. "Will it be better two more weeks later? The number of sick people, the dead and the poor all increased during the past three months. "People tried their best only in vain because of the awkwardness and mistakes of the authorities."

If the city fails to control the virus's spread by the next deadline, it risks authorities taking the lockdown into its fifth month.