HANOI -- Vietnam is bolstering efforts to keep out the coronavirus ahead of national holidays beginning Friday as neighboring Cambodia and Laos suffer from a surge in new cases.

Prime Minister Pham Minh Chinh, who took office this month, met with Cambodian counterpart Hun Sen on Sunday in Jakarta, on the sidelines of the Association of Southeast Asian Nations gathering to discuss the Myanmar crisis.

Vietnam donated $500,000 to Cambodia along with 800 respirators, 2 million medical masks and 300,000 N95 masks to aid the kingdom. Cambodia has faced an increase in coronavirus cases since the beginning of April, with new infections topping 650 on Friday. Chinh told Hun Sen that Hanoi is always ready to assist Cambodia in preventing the pandemic.

Hanoi, known for its efficient handling of the coronavirus, raised its alerts to the highest level ahead of the four-day holiday that starts Friday to celebrate Reunification Day, which marks what is known as the Fall of Saigon in the West, and Labor Day. More domestic travelers are expected, as people were urged to stay at home for months to contain the pandemic. 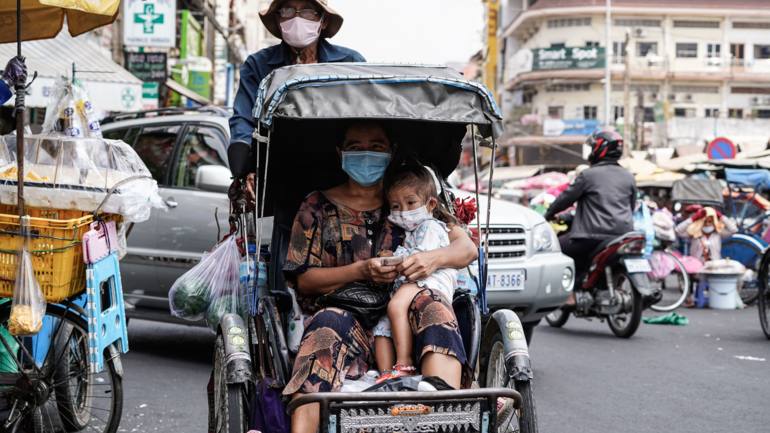 Phnom Penh, Cambodia, in March: Hanoi has tightened its land borders to prevent illegal entry from Laos and Cambodia. (Photo by Vann Soben)

Vietnam also has asked all localities to intensify surveillance, hoping to detect new infections faster. Field hospitals are being set up in the southwest to prepare for COVID-19 patients, with health experts and medical staff from other provinces mobilized to support the region's medical facilities.

Hanoi has tightened its land borders, preventing many illegal entrants from Laos and Cambodia. But illegal entrants coming by boat from Cambodia, who skip testing and the mandatory 14-day quarantine, remain a big challenge.

Vietnam shares borders of over 2,100 km with Laos and over 1,100 km with Cambodia, and the three countries meet along Vietnam's southwest. Trade ministry data shows that Vietnam shares a total of 19 border economic zones, 18 international gates, 20 main gates and 43 sub-gates bordering Laos or Cambodia.

The four Mekong Delta provinces of An Giang, Dong Thap, Kien Giang and Long An have been alerted as potential epicenters for a COVID-19 outbreak, as they are near the border with Cambodia.

The communist-led country reported a spike in new daily cases including 66 on Feb. 3, but brought the number down to zero by late March. Yet COVID-19 cases in Vietnam have grown since then, with the seven-day average reaching 13 on April 18.

Authorities fear the high risk of cross-border transmission will trigger a fourth wave in Vietnam, Long said Sunday, adding that the more transmissible double mutant variants in India and the U.K. variant in Cambodia pose a greater risk of community transmissions.

The health minister cited the risk of an outbreak originating from outside Vietnam, as India reported more than 340,000 new cases in the past 24 hours. Laos announced a lockdown in many locations Wednesday.

The ministry is accelerating COVID-19 inoculations and monitoring local prevention measures, Long said. But health experts say Vietnam has received a low proportion of vaccine doses compared with its population.

Around 200,000 people in Vietnam, mostly frontline workers and medical staff, have been vaccinated as of Sunday. But many worry that Vietnam is making slow progress compared with other countries.

But many Vietnamese are not hurrying to receive vaccines, as the country currently has few patients.

Vaccinations began in Vietnam on March 8, the latest among the major countries of the Association of Southeast Asian Nations. Many ASEAN countries import vaccines from China, but Vietnam cannot rely on Chinese-made vaccines because of territorial disputes with China in the South China Sea, a diplomatic source explains. A domestically developed vaccine is expected to take some time to be fully produced after clinical trials are completed.