HANOI -- Vietnam faces the prospect of missing its 6.5% growth target for this year, underscoring the country's sharp turn from a pandemic success story to hard-hit victim.

The growth figure for the third quarter, anticipated by the end of this month, is being widely projected at under 2% -- worse than the same quarter of 2020. A wave of infections and a strict COVID-19 lockdown squeezed the southern commercial hub of Ho Chi Minh City, and experts warn the impact could weigh on the economy beyond the third quarter unless the country manages to accelerate vaccinations.

"We expect gross domestic product growth in the third quarter to have slowed to 1.9% year-on-year, from 6.6% in the second quarter, as the pandemic hit the economy," Tim Leelahaphan, economist for Thailand and Vietnam at Standard Chartered, told Nikkei Asia.

Ho Chi Minh City-based SSI Securities also said Vietnam may have experienced a pullback in the third quarter, noting the figure could come in 0.8 to 1 percentage point lower than the 2.69% pace for the same quarter a year earlier.

Hanoi-based VNDIRECT Securities painted an even darker picture in a report issued Sept. 13, saying, "We forecast 3Q21 GDP growth at -1.2% year-on-year before rebounding to 5.7% in 4Q21." 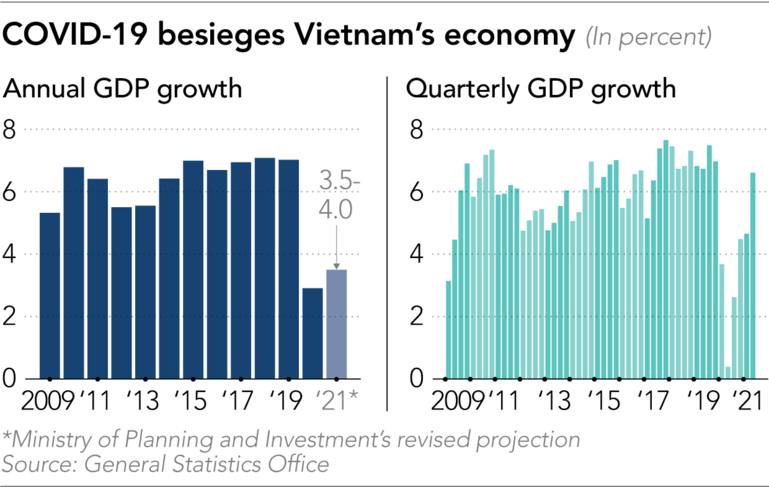 In the face of the weak performance in the third quarter, the Ministry of Planning and Investment on Sept. 14 cut its GDP growth forecast to a range of 3.5% to 4% this year if COVID-19 is under control in September. The ministry cited disruptions to production, supplies, services and exports, as well as a serious factory labor shortage, in its downgrade.

Based on the ministry's revision, the National Assembly is expected to approve new targets.

Meanwhile, the Asian Development Bank on Wednesday revised down Vietnam's GDP growth for this year to 3.8%, down 2.9 percentage points from its previous forecast in April.

"The near-term outlook remains challenging. The main risk is the prolonged pandemic, especially if the country's vaccination rate does not increase significantly," the bank said.

Ho Chi Minh City has set a target to fully reopen in mid-January, VNDIRECT said. Some service sub-sectors, including hotels, food services and transportation may record negative growth in the second half of 2021, the company said. VNDIRECT downgraded annual GDP growth in 2021 to 3.9% from 5.0-5.5%.

Standard Chartered also revised its 2021 forecast to 4.7% from 6.5%. "While we expect growth to recover to 5.5% y/y in Q4-2021, we see downside risks to our forecast -- and a potential interest rate cut -- if the economic impact of Vietnam's COVID outbreak is prolonged. Such a scenario could affect Vietnam's external position," Leelahaphan said.

On Sept. 21, Hanoi relaxed restrictions but Ho Chi Minh City will remain under lockdown at least until the end of this month.

Until the current COVID-19 wave hit Vietnam in late April, Vietnam had made it through the pandemic relatively unscathed. But as of Thursday, the country had recorded cumulative deaths of 18,584. By itself, Ho Chi Minh City, the largest city with 9 million people, counted 14,246 deaths, 76% of the nationwide total.

The city missed a Sept. 15 deadline to reopen after it deployed soldiers in the streets last month to maintain curfews for at least three weeks.

Prolonged restrictions are expected to weigh on the country's factories. Areas around the capital and the southern economic hub are home to factories operated by major foreign companies such as Samsung Electronics, Intel and Nike. Together they contribute around half of the country's GDP and form a crucial link in regional supply chains.

Exports of smartphones and personal computers to meet growing demand amid the worldwide shift to online activities could have saved Vietnam from freefall. "Exports of electronics and metal products were rare spotlights amid the worsening trade picture," RongViet Securities pointed out in its Sept. 20 report. Large declines were recorded in handbags, footwear and wooden products, by 54.7%, 40.2% and 39.1%, respectively, month-on-month in August, the Ho Chi Minh City-based brokerage said.

On Sept. 17, a group of foreign business associations, including American, European and South Korean chambers of commerce as well as the U.S.-ASEAN Business Council sent a letter to Prime Minister Pham Minh Chinh. "Surveys that our associations have conducted show that at least 20% of our manufacturing members already have shifted some production to another country, with more discussions underway."

"Vietnam is well-placed to benefit as companies seek to diversify global supply chains and decrease reliance on China," AmCham Vietnam Executive Director Mary Tarnowka told business news outlet BSA Online this month. "But the current mixed signals, disruptions and delays in a road map for managing COVID and enabling reopening and recovery, will limit that potential." In the capital, meanwhile, a strict lockdown has closed factories, shops and services on a citywide and provincial scale, causing major damage to the economy, Vietnamese economist Le Dang Doanh said.

For foreign multinationals, "moving to another country will take time as they have invested a lot of money in Vietnam, and also enjoyed benefit from their investment, but the government needs to promptly respond and dialogue directly with both domestic enterprises and foreign investors," he added.

A government official acknowledged the need to expand vaccinations.

"The global economy is on the mend with recovering demand in foreign markets. Vietnam, however, has seen its production capacity and business resilience weakening immensely following prolonged restrictions," Nguyen Duc Kien, head of the prime minister's Economic Advisory Council, told the Sai Gon Giai Phong newspaper. "Vietnam must accelerate approval of homegrown vaccines and soon put them into use."