TAIPEI/TOKYO -- Major Asian stock markets took another beating Thursday amid mounting alarm over the potential damage to earnings at China-exposed companies from a coronavirus outbreak that shows no sign of abating.

A fifth of shares listed on the Taiwan Stock Exchange fell by the 10% daily limit when trading resumed after the Lunar New Year holiday, with the market swamped by pent-up investor worry about the virus.

The Taiwan bourse's benchmark index ended the day 5.8% below its Jan. 20 close, with 198 companies going limit-down during the day.

Blue chips on the Taiwanese bourse are particularly reliant on China, leaving them vulnerable to the turmoil caused by extended business shutdowns spurred by the virus.

"Investors are worried about the impact of prolonged factory shutdowns on Asian supply chains and the economy," said Yukino Yamada, senior strategist at Japan's Daiwa Securities.

The two major iPhone assemblers have key factories in China's Henan and Jiangsu provinces, where authorities have extended the Lunar New Year holiday to Feb. 10. Any further delays risk disrupting shipments of a new budget iPhone model, slated to get into full swing in late February for a launch as early as March.

Hon Hai, better known as Foxconn, said Wednesday that it has set up an internal epidemic response center. The company employs between 700,000 and 1 million people in China and hopes to mitigate the impact of the outbreak by centralizing response plans and information on the status of facilities around the country.

The prospect of production delays at these companies also weighed on the shares of suppliers less directly exposed to the mainland. Taiwan Semiconductor Manufacturing Co., which produces iPhone processors, and camera lens maker Largan Precision -- both of which handle production in Taiwan -- each slid roughly 5%. 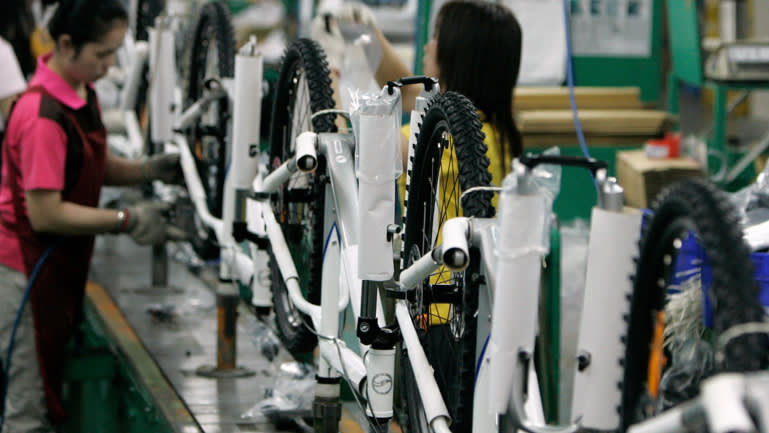 The Taiwanese market jitters extended beyond the information technology sector. Bicycle maker Giant Manufacturing, which has production facilities in China, and Eva Airways, which operates cross-strait flights, both went limit-down during the day.

In Japan, foreign investors selling China-related stocks are seen as a driver of the market retreat, with the possibility of the World Health Organization declaring the coronavirus an international health emergency adding fuel to the fire.

Tourism-related companies, many of which count on an influx of Chinese business during the year's busiest travel season, have been among the hardest hit by the outbreak.

ANA Holdings shares fell 2% on Thursday, the day it released earnings for the nine months through December. The All Nippon Airways parent saw passenger traffic drop around 10% during the Lunar New Year break compared with the previous year's holiday period.

Bookings for flights from China have fallen by half on the year for February, Executive Vice President Ichiro Fukuzawa told a news conference Thursday. China-bound bookings from Japan have dropped 40% or so, he noted.

"We have to consider suspending or reducing some flights," Fukuzawa said.

Casio Computer, which generates nearly 20% of its timepiece sales in China, is grappling with Guangdong Province watch production facilities and a marketing subsidiary in Shanghai being shut down until Feb. 9. Its shares slumped 4.5% on Thursday.

The company has set up a team to figure out how to respond to the outbreak. It may be forced to take such steps as postponing promotional events.

"We still can't tell how our sales will be affected" by the virus, said Seiji Tamura, executive officer in charge of public relations.

East Japan Railway noted that it has begun to see cancellations of train tickets and reservations at group hotels.

But Central Japan Railway said the outbreak has yet to have a significant impact on passenger volume on the Tokaido Shinkansen bullet train linking Tokyo and Osaka.

More than half the guests at the company's Tokyo and Osaka accommodations hail from overseas.