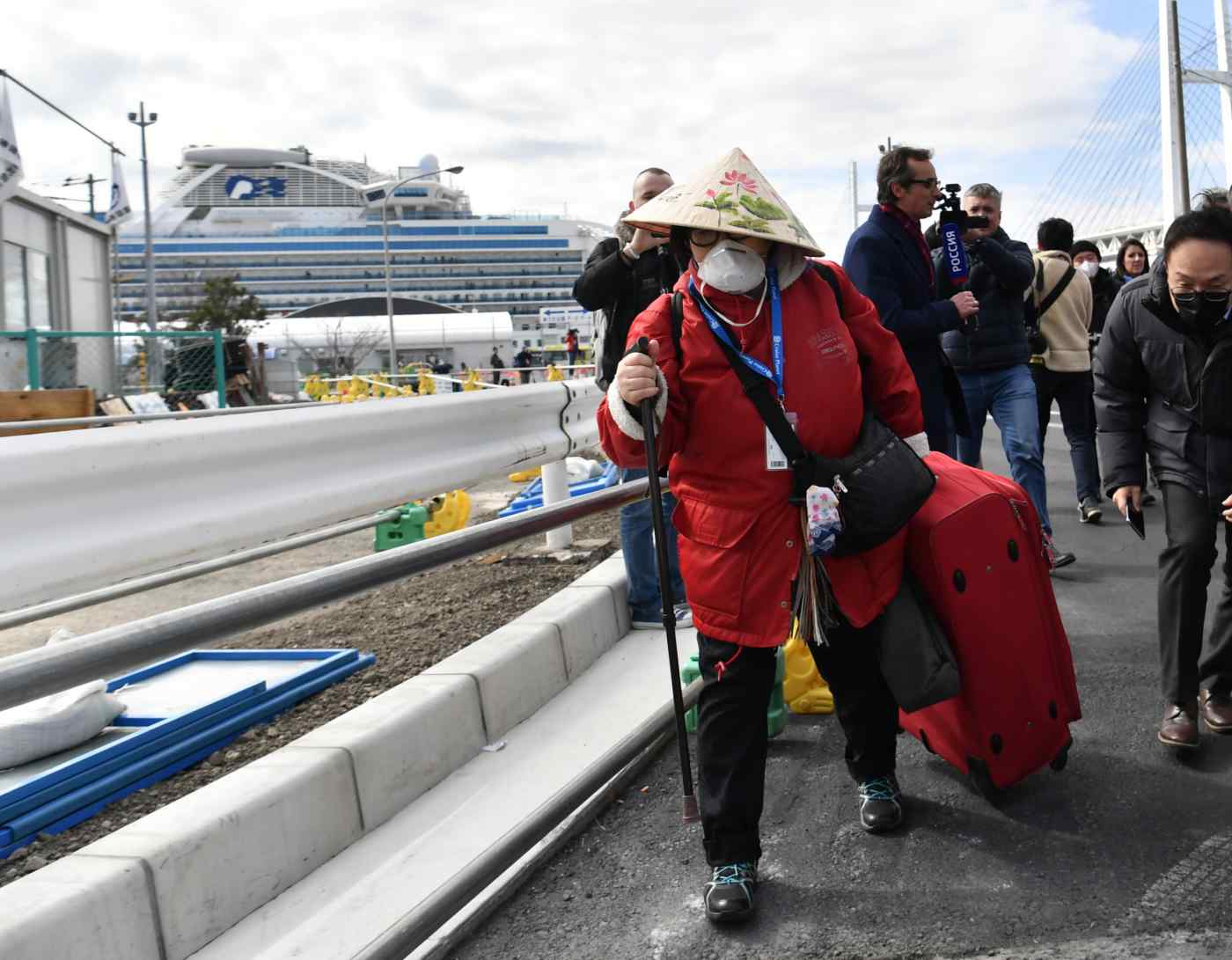 Some passengers on the Diamond Princess -- mainly elderly travelers -- started disembarking in the morning of Feb. 19 in Yokohama, near Tokyo.
February 19, 2020 11:41 JST | Japan
CopyCopied

TOKYO (Kyodo) -- Passengers on the coronavirus-hit cruise ship Diamond Princess started disembarking Wednesday in Yokohama after a two-week quarantine period that raised questions about the Japanese government's response to the outbreak.

The disembarkation of nearly 3,000 people is expected to take three days at least, according to the government. In the first group, some 500 mainly elderly passengers who have tested negative for the virus will leave the ship after final checkups with doctors.

The cruise ship was initially carrying around 3,700 passengers and crew from more than 50 countries and regions. The number of cases confirmed onboard increased day by day, reaching 542 on Tuesday. Those found to be infected with the pneumonia-causing virus have been transported to medical facilities.

Test samples have now been collected from all passengers, the health ministry said.

Disembarking passengers will be transported to Yokohama and other train stations in the area.

Those who have had close contact with infected people on the ship will be kept on board for the time being for further monitoring even though they have tested negative. The ship's operator will decide when crew who have not been infected will leave the ship, according to the ministry.

U.S. and other media have raised questions about Japan's response to the spread of the virus on the ship. The United States has evacuated many of its citizens from the vessel using chartered jets and several other countries have announced they will follow suit.

The Japanese government says it was appropriate to quarantine the vessel, a position endorsed by the World Health Organization.

Aside from those on the vessel, the number of infections confirmed in Japan has risen to 61.

The quarantine at Yokohama Port, south of Tokyo, began Feb. 5 after a passenger who disembarked in Hong Kong on Jan. 25 was found to be infected with the new coronavirus, which originated in the Chinese city of Wuhan.

After departing Yokohama on Jan. 20, the Diamond Princess stopped at Kagoshima, southwestern Japan before arriving in Hong Kong. It then traveled to Vietnam and Taiwan before calling at Okinawa in Japan and then returning to Yokohama on Feb. 3, according to its operator.