WHO must also look elsewhere, China says ahead of COVID probe SHANGHAI -- An international team of scientists from the World Health Organization will begin tracing the origin of the COVID-19 virus in China on Thursday, even as Beijing suggests it should also look in other countries.

The proposal reflects the country's long-held view that the virus, which has infected over 90 million people and caused nearly 2 million deaths worldwide, might not have originated in Wuhan.

This thinking may test Beijing's cooperation with the 10-member team of scientists, whose visit was delayed by Chinese officials for unknown reasons.

The WHO said studies will start in Wuhan as the scientists seek to identify the source of the disease in collaboration with Chinese counterparts.

"Scientific evidence will drive hypothesis, which will then be the basis for further long-term studies," said WHO Director-General Tedros Adhanom Ghebreyesus on Monday.

The Chinese foreign ministry confirmed on Tuesday that the team, which includes experts from Germany and Denmark, will fly to Wuhan from its staging point in Singapore.

China said both sides have reached a basic consensus on how to conduct the mission but had reservations about Wuhan being considered the origin of the pandemic.

"As new developments emerge, the world's knowledge regarding the virus deepens and more early cases are found, [making it] highly likely that origin tracing will involve many countries and localities," Zhao Lijian, a foreign ministry spokesperson, said on Monday. "WHO will need to pay similar visits to other countries and regions as the need arises."

While the WHO does not rule this out, it insists on starting in Wuhan, where "a big outbreak occurred," Marion Koopmans, a member of the team, told Chinese state media CGTN on Monday.

Koopmans, a virus expert at Erasmus University Medical Center in the Netherlands, is known for helping trace a coronavirus outbreak last year in the country's mink farms. Unlike the last two WHO visits to China last year that focused on local cases, Koopmans said this time experts will examine information that has been collected by the WHO and China to help determine the origin of the virus and its evolution into a pandemic.

"Findings from studies in China may lead to similar work in other countries under the auspices of WHO," said WHO Executive Director Michael Ryan on Monday. 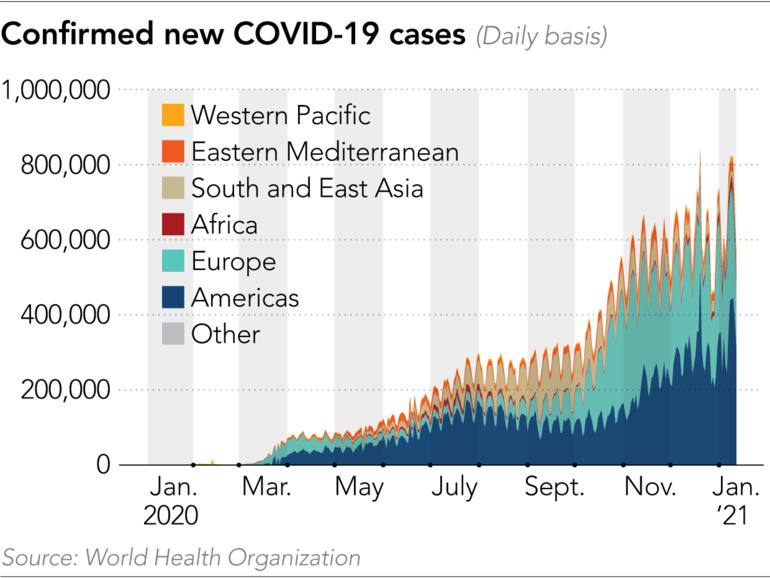 The visit comes after Ghebreyesus expressed disappointment last week over the delay by Chinese officials in granting the WHO team necessary access. The delay provoked criticism of the organization by the U.S., the latest barrage coming in a Tuesday social media post by Secretary of State Michael Pompeo, who accused the WHO of being "corrupted by China's influence" leading to a "catastrophic failure to deal with COVID-19."

China has seen a sharp surge in local cases since the beginning of January. The country reported 103 cases on Sunday, the highest since July, mainly in the northern province of Hebei.

Recent cases have bewildered authorities, who have been relatively successful in containing sporadic outbreaks through mass testing and targeted lockdowns without hindering economic activity.

The government has now resorted to harsher measures, which have included displacing about 20,000 villagers from the town of Zengcun in Hebei on Monday, local news reported.

The province's proximity to Beijing put authorities on high alert. In addition, the spring travel season is nearing and millions are expected to take trips during a 40-day period starting on Jan. 28.