We are not COVID-19: Asian Americans speak out on racism 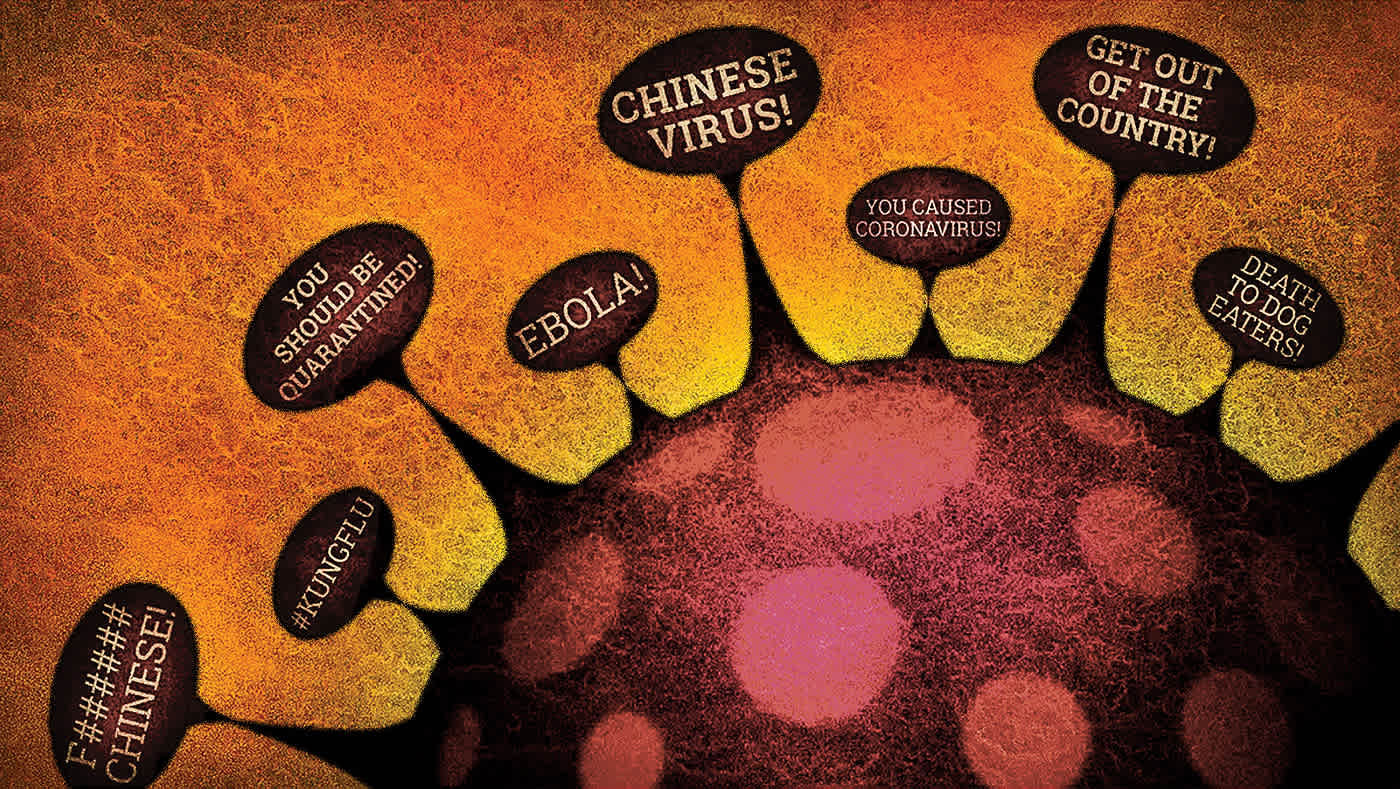 Asians around the world have faced virus-related slurs: These were recounted to the Nikkei Asian Review or reported on the website NextShark. © Illustration by Michael Tsang
MARRIAN ZHOU, YIFAN YU and ALEX FANG, Nikkei staff writersMay 9, 2020 19:37 JST | North America
CopyCopied

NEW YORK/PALO ALTO, U.S. -- The coronavirus pandemic has unleashed a wave of discrimination against Asian Americans and expats in the U.S. Over several weeks, the Nikkei Asian Review reached out to members of the community -- from well-known actors and authors to medical professionals -- and asked them to share their stories and reflections.

Bigotry motivated by COVID-19 is not confined to American nor Western shores. Incidents have spread across Europe, the Middle East and Australia. Reports have surfaced in Japan and South Korea, too. Within China, natives of the outbreak's epicenter, Hubei Province, say they have been shunned while alleged mistreatment of Africans has sparked diplomatic friction.

The Asian American experience, though, is both symbolic of this universal problem and unique.

For many Asian Americans, the hostility is a reminder that they are often seen as foreigners in their own land -- even if their families have been in the country for generations, even if they are on the front lines as hospital workers, even as the government marks Asian/Pacific American Heritage Month in May.

In the U.S. alone, 1,497 discrimination complaints were filed from March 19 to April 15, according to the Asian Pacific Policy & Planning Council and Chinese for Affirmative Action. New York and California accounted for the majority of the complaints; 40% of the victims identified themselves as ethnically Chinese; and 69% were women.

NextShark, a news website focusing on Asian stories, has reported a steady stream of abusive comments in the U.S. and abroad, from "Get out of the country!" to far worse. U.S. President Donald Trump's use of the term "Chinese virus" in the early days of the crisis stoked animosity, critics say, though he has refrained from this of late.

Here is Asian Americans' collective message against coronavirus racism: We are not COVID-19. 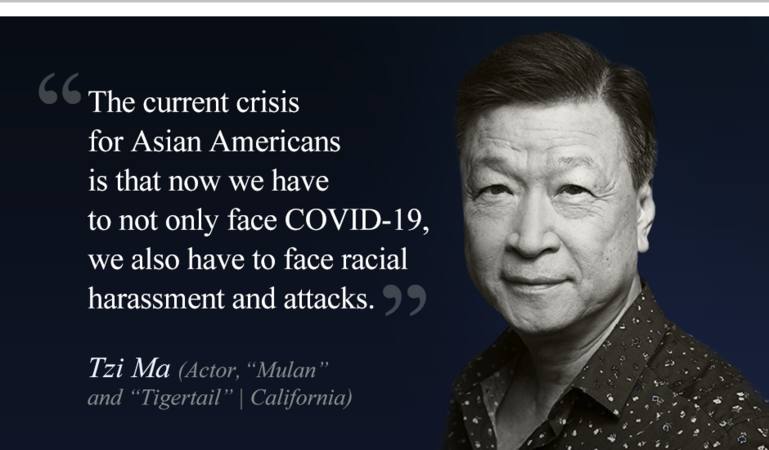 Tzi Ma was walking into a Whole Foods supermarket in Pasadena, California, when a car pulled up.

"I thought he stopped for me to cross," recalled the actor known for the "Rush Hour" series and more recently "Mulan." "He rolled down the window and, as I waited for him to pass, he looked at me and said, 'You should be quarantined.'"

Then the driver took off.

"I kind of froze and I kind of went numb and all cold inside, and then I got very angry and I started screaming at him, but he was already gone. I was rather disturbed by the fact that he triggered me so much that I had to resort to such foul language and anger."

Ma, making a point echoed by many others, strongly disagrees with Trump's rhetoric. "'Chinese virus' in particular is dangerous to Asian Americans because you know that we're still being seen in the public as foreigners. They will not even know what Asian ethnicity you have or what your background is." Comedians are famous -- some might say infamous -- for pushing boundaries. But stand-up comic Joe Wong is calling out his peers for targeting Asians in a way, he argues, they would not lampoon other races.

"When it was SARS, it was racism due to SARS. When it's COVID-19, it's racism due to COVID-19. When everyone is healthy, it's just a good practice for some comedians to tell racist jokes at Asians' expense to get laughs," Wong said. "Racist jokes against Asians are OK in live comedy shows."

Wong says fellow comedians have told him, "Your government brought the virus here."

"I was like, who the hell do you think I am? President of China?" As a novelist, Amy Tan understands the power of words -- and takes issue with President Trump's choice of them.

"I concur with many that Trump's renaming of coronavirus was deliberate and he knew what the consequences would be: the unleashing of open racism to deflect blame for his irresponsible lack of action early on," she said.

She does not buy the president's justification for his previous use of "Chinese virus."

"He cited the origin of other diseases as his precedent. [But] Ebola is in reference to the Ebola River, not a race. Same with MERS. 'Chinese' is not a location. It refers to people, people easily identifiable by facial features."

She continued: "Because Trump placed direct blame on the 'Chinese,' I think all Asians -- not just Chinese -- are wary of being in any situation that might make them a target. I am also concerned that Asians in tight-knit communities fear being collectively and individually stereotyped as vectors of the disease." Daniel Okimoto, a professor of politics at Stanford University, said Trump is "prone to pointing the finger of blame at others -- especially racial and ethnic minorities and foreign nationals -- and denying his own responsibility."

But the professor sees a larger issue. "When will Americans understand and acknowledge that Asian Americans are fellow citizens, bearing no ties to events in Wuhan, China?"

Many do see Asian Americans as compatriots, of course. But for Okimoto and others, this crisis has been frustrating and alarming.

"I'm hearing stories of little kids getting harassed" by their classmates, said actress Celia Au. "A nurse, a friend of a friend, got attacked -- spat on in conversation after going to work."

Aerospace consultant Ray Kwong's brush with coronavirus discrimination happened at a bank. He was at the teller window when a "white guy wedged his way in front" to ask a question.

"I said to the guy, 'I'm in the middle of a transaction,' and pointed to the end of the line," Kwong said. "He turned toward me and realized I was Asian, then theatrically backed away while yelling, '10 feet! 10 feet!' and making a great show of pulling up his shirt to cover his mouth and nose."

Stories like these inspired Telly Wong, the chief content officer at New York marketing agency IW Group, to launch an online project called #WashTheHate that promotes "solidarity across all communities as we battle a common enemy" -- COVID-19.

"After we launched the #WashTheHate campaign, an old friend of mine reached out to me," Wong said. "She's a woman in her 60s. She said she was just walking in East Village and some guy came up to her and just shoved her to the ground, and she broke her finger. Completely unprovoked."

Actor and #WashTheHate supporter Osric Chau, known for the "Supernatural" series, told the Nikkei Asian Review that "knowing [the racism] is real still boggles my mind." 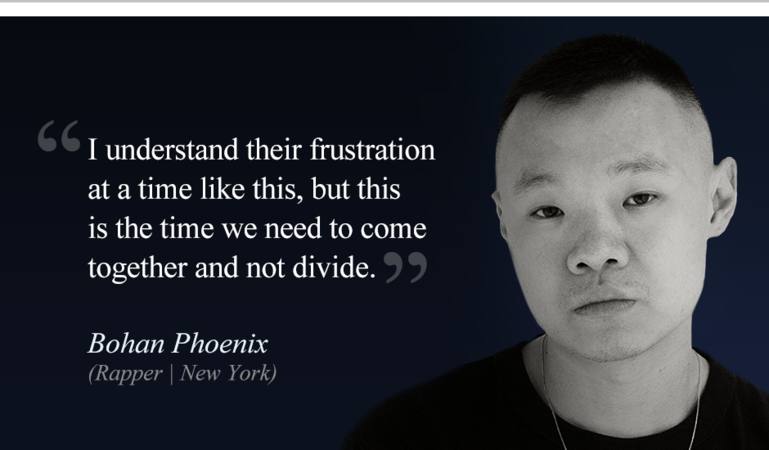 Rapper Bohan Phoenix was reading a book on the New York subway. As the train pulled into a station, a man got up to get off.

"But he saw me and stopped," Phoenix said. "Then he pointed at me and yelled, 'Ebola!'"

"I didn't say anything back to him, I just had to contemplate. I was lucky I wasn't attacked like so many Asian people across the world. Still, it stuck with me and made me realize just how much further we as an ethnicity have to go." Hunter Chen, who lives in Pennsylvania and commutes to a hospital in neighboring Delaware, finds his nursing job "increasingly difficult."

"'Chink,' 'Chinaman,' 'Chinese virus,' 'Asian virus' -- that's unfortunately the language that is being used by the patients," he said.

"It's upsetting that more people will treat me, or even later my children, differently despite the fact that I am not even Chinese. I am an American who contributes to American society. ... I might have lived in the U.S. longer than those people who think that I am a walking disease." Journalist Jiayang Fan, who writes for The New Yorker, remains optimistic that the crisis is simply warping some people's perspective -- despite her own traumatic experience.

Fan said she wants "to believe what happened is anomalous and that we are living in extraordinary times and fear can deform us."

Australian-born actor Desmond Chiam also takes a nuanced view, even regarding Trump. He thinks the president's words were "calculated" to push back against the Chinese Communist Party "shifting blame to the U.S."

"But even if we give the benefit of the doubt, the collateral damage is still huge," Chiam said. "For everyone out there intelligent enough to parse the complex dance of international relations, there are 10 who can't and just hear 'Chinese, bad.' That's dangerous as all hell."

Actress and comedian Suzy Nakamura is less forgiving. "The United States has a leader who gives ignorant losers the license to act out their hatred of people who they blame for their own unhappiness and fear," she said.

Tech journalist Ray Wong wants everyone to remember a simple fact: "COVID-19 wasn't created by Asians; they're victims as much as any other ethnic group." As some U.S. states begin to reopen, many Asian Americans are struggling to shake concerns about safety.

"My 14-year-old son went out for a run the other day," said James Liu, a neurosurgeon in New Jersey. "He said there was a white Maserati that drove very close to the shoulder of the road, where had he not jumped out of the way, he could have been hit by the car."

He saw the same Maserati drive by five more times during his jog.

"After I read more articles about the anti-Asian sentiment, I don't want my son to go jogging anymore." Benny Luo, founder of the NextShark website, harbors similar doubts as Liu. "If this keeps going on even after quarantine," he said, "how can I feel comfortable with people like my mom or grandmother going out?"

Luo said the NextShark team used to receive two or three tips a week about racism against Asians. Since the end of February, he stressed, "we've been getting 15 to 30+ news tips a day."

"Instead of playing the blame game, we must be more compassionate and kind to one another, and focus on working together to build a better future."