What Singapore's coronavirus tactics can and can't teach world

SINGAPORE -- In the global race to stop the new coronavirus outbreak, Singapore has been hailed by the World Health Organization as an exemplar of effective detection and containment.

For other countries, however, the answer to the epidemic may not be as simple as "do as the Singaporeans do."

The city-state accounted for 130 out of the roughly 100,000 infections reported worldwide as of Friday. Eighty-two of the patients had already been discharged, with not a single death. Local health authorities' carefully calibrated measures to control the outbreak are backed by some built-in advantages: a small territory, high medical standards, and the ability to impose somewhat draconian measures that might not fly elsewhere.

Late last month, the government revoked a 45-year-old man's permanent residency status because he had defied a "stay home" order.

The man had recently been in China -- the origin of the outbreak -- and was required to remain inside for 14 days. But he did not answer his phone and was not home when officers conducted spot checks, according to the immigration authority.

Now he has been banned from Singapore for good.

"Some people said that this may be a bit harsh," Home Affairs Minister K Shanmugam conceded in a Facebook post. But he explained: "During this period we need everyone to cooperate. People need to know that we will not hesitate to take strong action."

Two Chinese nationals have also been charged for giving false information about their whereabouts, under Singapore's Infectious Diseases Act. One had been confirmed infected, while the other had been identified as a close contact.

The public appears to be on board with the no-holds-barred approach, according to Eugene Tan, an associate professor of law at Singapore Management University.

"Even measures which may be seen as severe in other countries have legitimacy in the eyes of stakeholders" in Singapore, Tan told the Nikkei Asian Review. He said Singaporeans have "trust and confidence in the government's handling of the outbreak," which results in cooperation by citizens, businesses and civil society.

"This whole-of-society collaboration has strengthened Singapore to fight cohesively against a common threat." 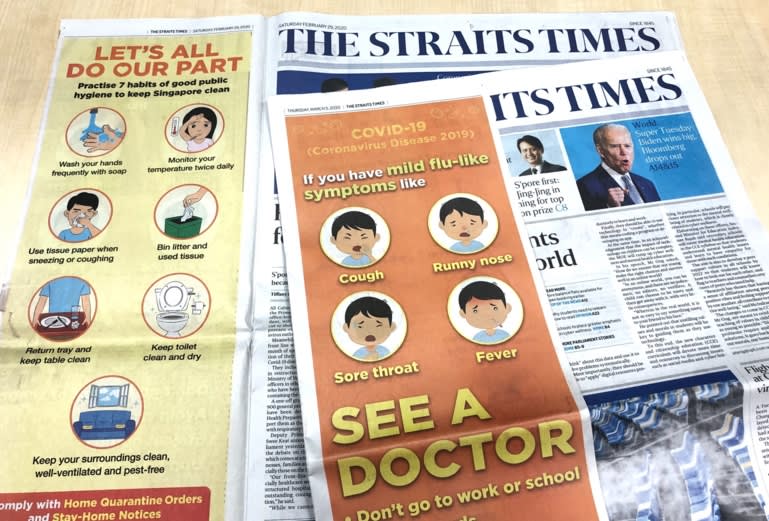 The Straits Times publishes the government's coronavirus advice over its front page. (Photo by Kentaro Iwamoto)

At the heart of Singapore's coronavirus battle plan is what authorities call "contact tracing" -- tracking the steps of patients to find other potential cases, with the help of the police. The system involves interviewing patients, calling their contacts and even collecting data on their movements from transport operators.

Singapore was also quick to close its doors to visitors from China, banning arrivals on Feb. 1. These aggressive methods have so far allowed the government to avoid sweeping school closures and business shutdowns seen in some countries, while earning high praise.

"Singapore is leaving no stone unturned, testing every case of influenza-like illness and pneumonia," WHO Director-General Tedros Adhanom Ghebreyesus said.

A Harvard University study published in mid-February estimated that, if every country had Singapore's detection capabilities, the world would have uncovered 2.8 times the number of COVID-19 cases.

Clearly, not every country has those capabilities, be it due to geography, individual rights or a lack of expertise.

Although the city-state's status as a key trading hub creates avenues for a virus to enter and spread, it is tiny, with just 720 sq. km of land and a population shy of 6 million. And since independence in 1965, it has been ruled by a single party, which built one of Asia's richest economies while maintaining tight control.

The SARS outbreak of 2003, when Singapore lost 33 patients, also gave the government valuable experience in combating infectious diseases. This is coupled with a willingness to prioritize information-sharing over personal privacy -- something that might be more controversial in other places.

In the current outbreak, the authorities have been disclosing a wealth of data on infections, including where patients stayed, moved and worked as well as whether they are linked to other cases.

"Singapore's COVID-19 response is grounded in scientific knowledge, empirical data and medical research. This makes for a rational and robust response," Tan said.

"There is no apology for the tough measures such as social distancing, rationing of masks, and the rigorous enforcement of quarantine and stay-home orders," he added, referring to bans on large gatherings and handouts of four masks per household from government stockpiles.

Still, there is a softer side to Singapore's coronavirus containment, too. 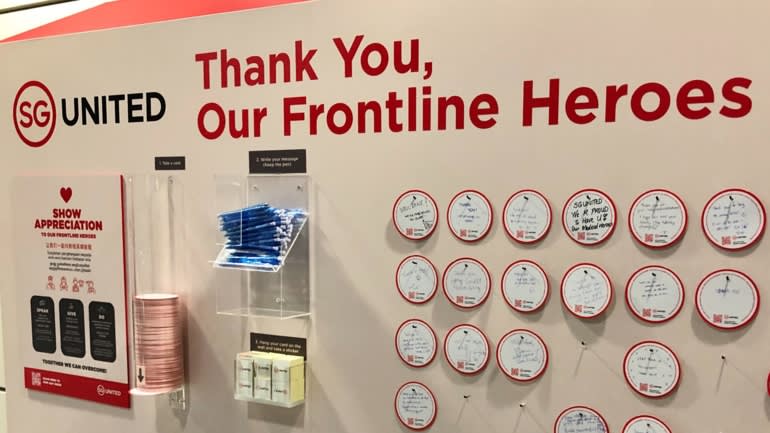 A message board expresses gratitude to medical workers fighting the coronavirus in Singapore. (Photo by Kentaro Iwamoto)

On Friday morning, officials held a news conference to announce a new task force for promoting better hygiene. Recommendations include using serving spoons when sharing food, and returning one's own trays when eating in cafeterias.

An official Whatsapp channel, meanwhile, keeps the public abreast of the latest developments. The government also takes out daily ads on the front page of The Straits Times newspaper, urging readers with even mild symptoms to see a doctor and refrain from going to work or school.

Residents are encouraged to show respect and appreciation to the health care workers bearing the brunt of the crisis. These "frontline heroes," as they are called, will receive special bonuses.

On the other hand, cabinet ministers took one-month salary cuts in solidarity with people affected by the disease.

Not every government move has come off without a hitch.

When the national alert level was raised from "yellow" to "orange" -- the second-highest -- on Feb. 7, it sparked panic buying of toilet paper and instant noodles. "Fear can do more harm than the virus itself," Prime Minister Lee Hsien Loong said in a televised message.

Officials are also well-aware that their war on the virus is far from over, and on Friday they reported 13 new cases -- the largest single-day figure. If infections surge, they could exceed the government's capacity for contact tracing.

Lawrence Wong, the minister for national development, told reporters on Tuesday that the government was looking at what else it can do to stop the outbreak -- short of isolating the country from the world, which he called untenable.

"We have to be mentally prepared that there may be new spikes in the number of infection cases here in Singapore, as has happened in other countries."