BANGKOK/SYDNEY -- The hundreds of Australian nationals evacuated from China's Wuhan -- the epicenter of the coronavirus outbreak -- were told that their subsequent 14-day quarantine on Christmas Island would take place in a facility that included a gym and a library.

Instead, the quarantine site the government selected to house evacuees has been criticized for its poor hygiene and inadequate facilities, with one returnee describing it "worse than a prison." The complaints seem to reflect the broader challenge countries face as they try to quarantine a large number of their own citizens.

"It looks completely different from what the government showed us in their photos," an Australian woman who calls herself Helen told the Australian Broadcasting Corp.

None of the quarantined individuals have been allowed access to the facilities that were shown in the brochures. The evacuees are forced to spend their days in what some have described as substandard conditions.

Christmas Island, an Australian-held territory 1,500 km off the country's northwest coast in the Indian Ocean, is home to a massive holding facility for people seeking asylum in the commonwealth. Canberra announced Jan. 29 that the island would serve as a quarantine center for people evacuated by the government.

Countries are rushing to quarantine citizens returning from the area hit by the outbreak as they try to keep their populations safe from the novel disease with no known cure.

But their responses to this unprecedented outbreak has been haphazard at best. In many cases, local residents protest against government plans as they fear their health will be at risk. In South Korea, protests have broken out in Asan, a city where officials have set up quarantine facilities for evacuees from Wuhan.

In Indonesia, President Joko Widodo abruptly announced on Feb. 1 that nationals evacuated from Wuhan will be quarantined on an air base in the island chain of Natuna, triggering days of protests from local citizens.

The islands' top governing official was given little notice of the move. The only contact from the government came through a WhatsApp message, said Natuna Regent Abdul Hamid Rizal.

Natuna had barely registered with past administrations until 2016, when China declared nearby waters as traditional fishing grounds. The area was also the scene of a confrontation with a Chinese coast guard vessel.

The government says it can quarantine Wuhan evacuees on Natuna without the consent of the regional governing authority since the individuals will be held in a military facility. 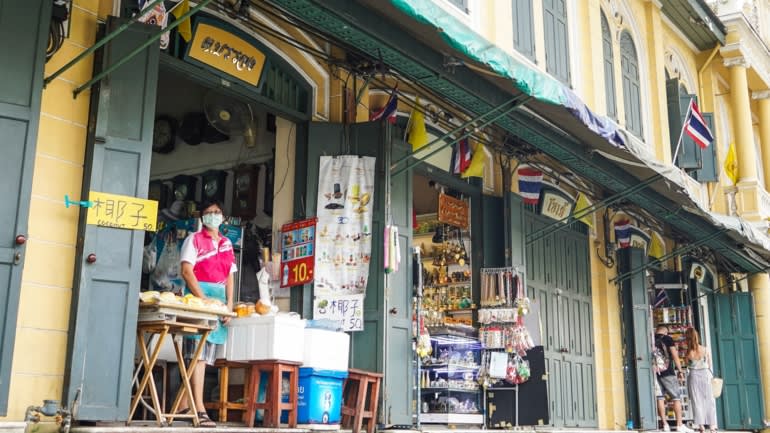 The ban of group travel by the Chinese government has squeezed souvenir vendors in Bangkok.

China has banned group overseas travel since Jan. 27 to contain the virus' spread. While the measure has attained a level of success in containing the coronavirus, it has dealt a blow to Asian tourism, which heavily depends on relatively big spending Chinese travelers.

The vendor works near the Grand Palace, a famous tourist spot. But the scenery has changed dramatically. Sidewalks once packed with tourists have been reduced to quiet emptiness. Tour buses are nowhere to be seen.

She now sells about five servings of coconut juice a day, down from 40 or 50 servings. The Lunar New Year is normally a busy time that brings double the number of Chinese customers as the rest of the year. But traffic has been so light that other vendors have packed up shop for the time being.

Nathapon, a Chinese interpreter for palace tours, has seen the number of groups drop to practically zero from 200 to 400 a day.

"At this rate, I can't send my children to school," said Nathapon.

About 11 million Chinese visited Thailand last year, making the country a top destination on a par with Japan. Traffic has surged 13-fold over a decade, and Chinese now account for the largest share of foreign tourists at 30%.

Tourism is responsible for nearly 20% of Thailand's gross domestic product. The drop-off in Chinese travel risks over $4.5 billion in losses, according to one estimate, and a 0.8-point drag on GDP.

The same dependence on Chinese tourists is seen throughout Southeast Asia. Chinese make up between 10% and 40% of all foreign tourists in the region.

At Sanur beach on the Indonesian island of Bali, only Western tourists are seen. A marine sports shop reports that Chinese previously made up 70% of the clientele. But since late January, customer traffic has entered a lull, said the owner.

Indonesia will lose about $90 million a month due to the lack of tourism, according to one estimate.

Frantic measures to contain the spread of the coronavirus will come with economic costs. The Indonesian government has grounded all flights to China, and stopped issuing visas to Chinese nationals.

Thailand's health ministry had considered a similar halt on granting some visas, but shelved the plan after facing pushback from tourism officials. Thailand appears to be conflicted over containing the coronavirus and maintaining the flow of lucrative Chinese tourists.

Additional reporting by Jun Suzuki in Jakarta and Marimi Kishimoto in Bangkok.