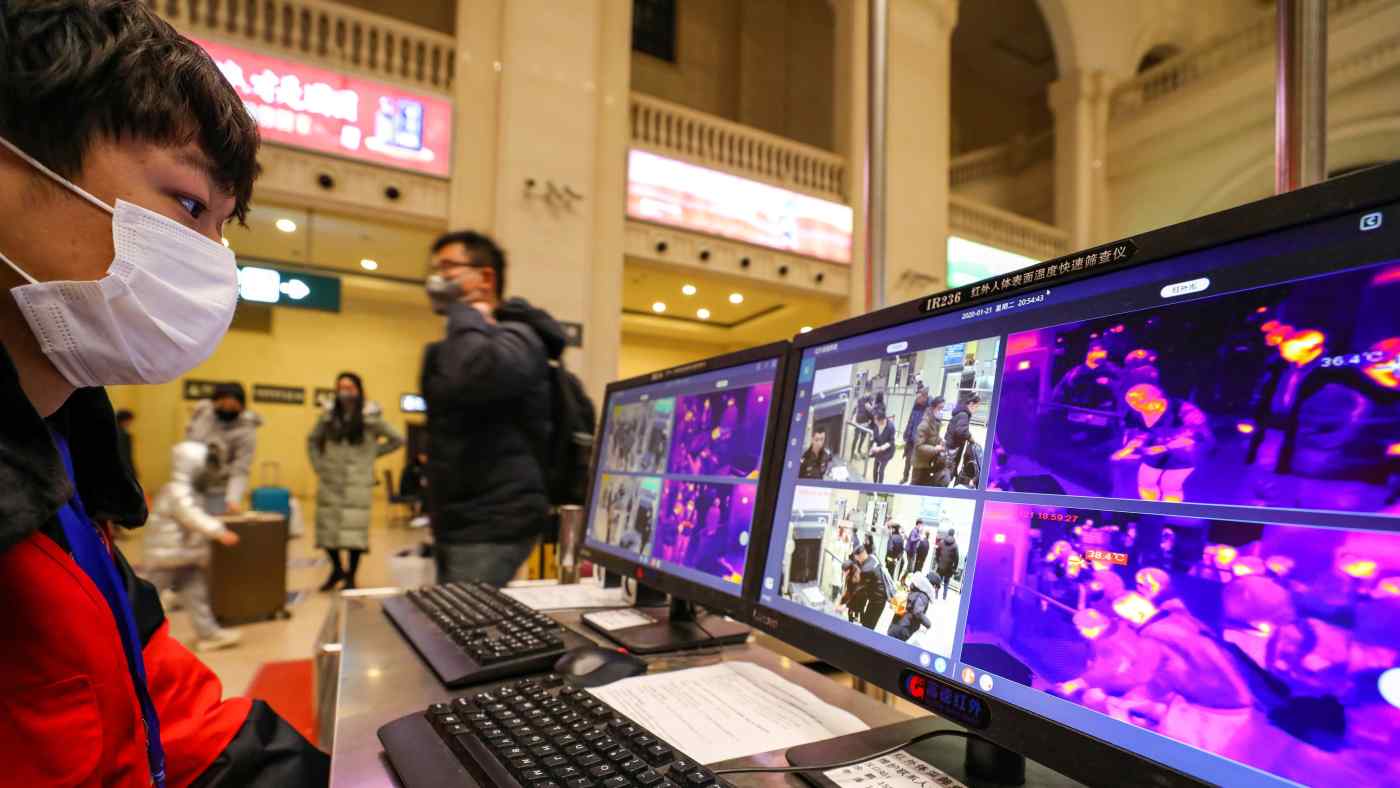 HONG KONG -- On hearing the news that Wuhan was to be placed on lockdown from Thursday morning, Angela Xie tried in vain to get out of the central Chinese city.

All air and rail tickets were either sold out or canceled, and the 26-year-old researcher is concerned she might not be able to return to Beijing for work after the Lunar New Year.

"I didn't think the situation would get so bad," said Xie, who traveled to her hometown of Wuhan from the capital by high-speed train on Monday to visit her family.

Xie is one of many Chinese trying to change travel plans because of concerns about succumbing to the new coronavirus, which broke out last month in Wuhan -- a transport hub in central China -- and is spreading rapidly across the country and beyond.

Wuhan's travel quarantine was announced just hours before it went into effect at 10 a.m. on Thursday, and involves an indefinite suspension of service at airports, train stations and intercity buses, as well as public transport within the city.

The virus has caused at least 17 deaths and infected more 500 people in China alone, with cases also reported in the U.S., South Korea, Thailand, Taiwan, Japan and Macao.

Fears among the hundreds of millions of Chinese travelers have been exacerbated by official confirmation that the strain can be transmitted from person to person and might mutate. China's National Health Commission has warned the spread of the coronavirus will "inevitably" pick up, no matter how good the preventive measures are.

An estimated 3 billion trips by rail, road and air were expected to be made in what is called the planet's largest annual human migration over the roughly 40 days around the Lunar New Year, which falls on Saturday. Most people travel to see family members, but in recent years more are taking vacations overseas. Medical staff transfer a patient at Jinyintan Hospital in the central Chinese city of Wuhan, where patients with pneumonia caused by the new strain of coronavirus are being treated.   © Reuters

Some people are changing destinations or modes of transport in response to the outbreak.

Just two days before a planned trip to visit her parents near Wuhan, Nicky Ji canceled her train ticket. Instead, the 35-year-old office worker in the eastern city of Hangzhou will stay with her cousin in Guangzhou.

Zoe Yang, 26, a Wuhan native who works for a state-owned company in Beijing, will have her parents travel to Jiangxi Province in eastern China rather than celebrating in her hometown.

But like many Chinese working outside of their hometowns, Li Lun believes it is worth the risk to go back to see their loved ones.

Li, a 47-year-old Beijing resident, will drive eight hours to her parent's home in Inner Mongolia to avoid the possibility of infection on a crowded high-speed train -- a journey that would take less than half the time. 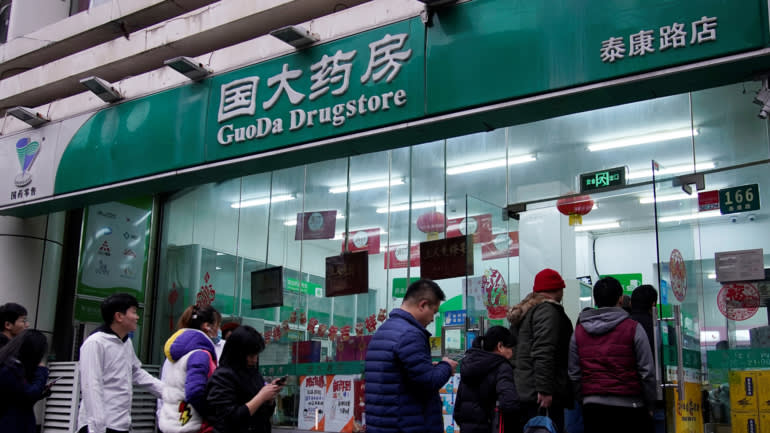 People line up outside a drugstore to buy masks in Shanghai on Tuesday.   © Reuters

The lack of awareness of the virus in the less developed parts of China, as well as among older people, contrasts starkly with the vigilance among younger residents in bigger cities.

"I wore a mask the whole time [on a five-hour train journey to Wuhan from Beijing]," Angela Xie said, adding that she had to take off her mask at the crowded train station for a security check.

Xie saw that many did not bother to wear masks at all. "There were still a lot of people in the public places, such as wet markets, buying stuff for Chinese New Year," she said.

Nevertheless, she choose to keep her mask on -- even at home -- because relatives came to visit. "I can't just tell them not to come. They all say I am insane."

When Nicky Ji traveled to Wuhan for work last week, she said that "business was going on as usual and people did not seem to be worried."

Ji had to visit several drugstores to buy 10 masks in Hangzhou, while her parents easily secured 30 masks at a pharmacy in Wuhan. She said her friends and colleagues all urged her not to go back home.

The mood in Wuhan remains calm despite confirmation that cases of the new virus has been reported in 13 provinces and provincial-level cities. But people in the city say that it is less crowded than during a normal holiday season.

Experts suspect that "super spreaders," as particularly infectious people are called, may have emerged. One patient in Wuhan infected 14 medical workers. Super spreaders accelerated the transmission of SARS and other respiratory illnesses in earlier outbreaks. 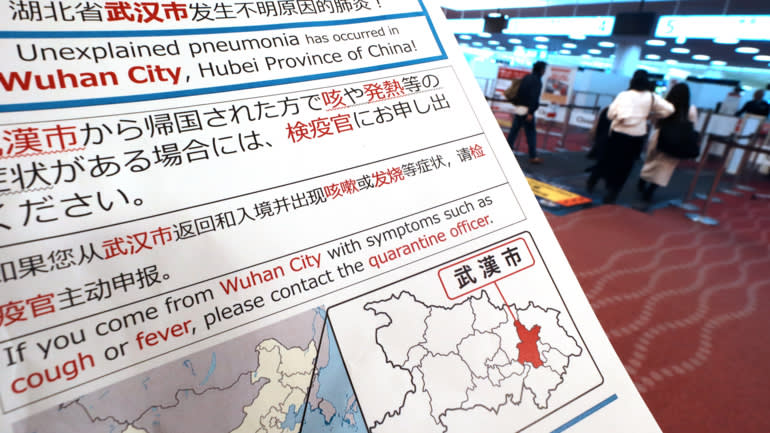 A quarantine notice about the outbreak of coronavirus in Wuhan is displayed at passport control at Haneda Airport in Tokyo. (Photo by Ken Kobayashi)

Indeed, Zoe Yang in Beijing said at least 10 people she knows have canceled plans to visit her hometown of Wuhan.

Many residents of the big cities have bitter memories of the 2002-2003 SARS outbreak.

"Beijing was like an empty city back then," said Li Lun, who has lived in the capital for 21 years. "We are taking the new pneumonia very seriously."

The owner of a public-relations company has installed advanced medical sterilizers in her home and her car, and has asked her employees to work from home instead of coming to the office.

But despite the fears, Li said she had to go home because her ailing elderly relatives would be disappointed if she did not. "It's a risk worth taking," she said.