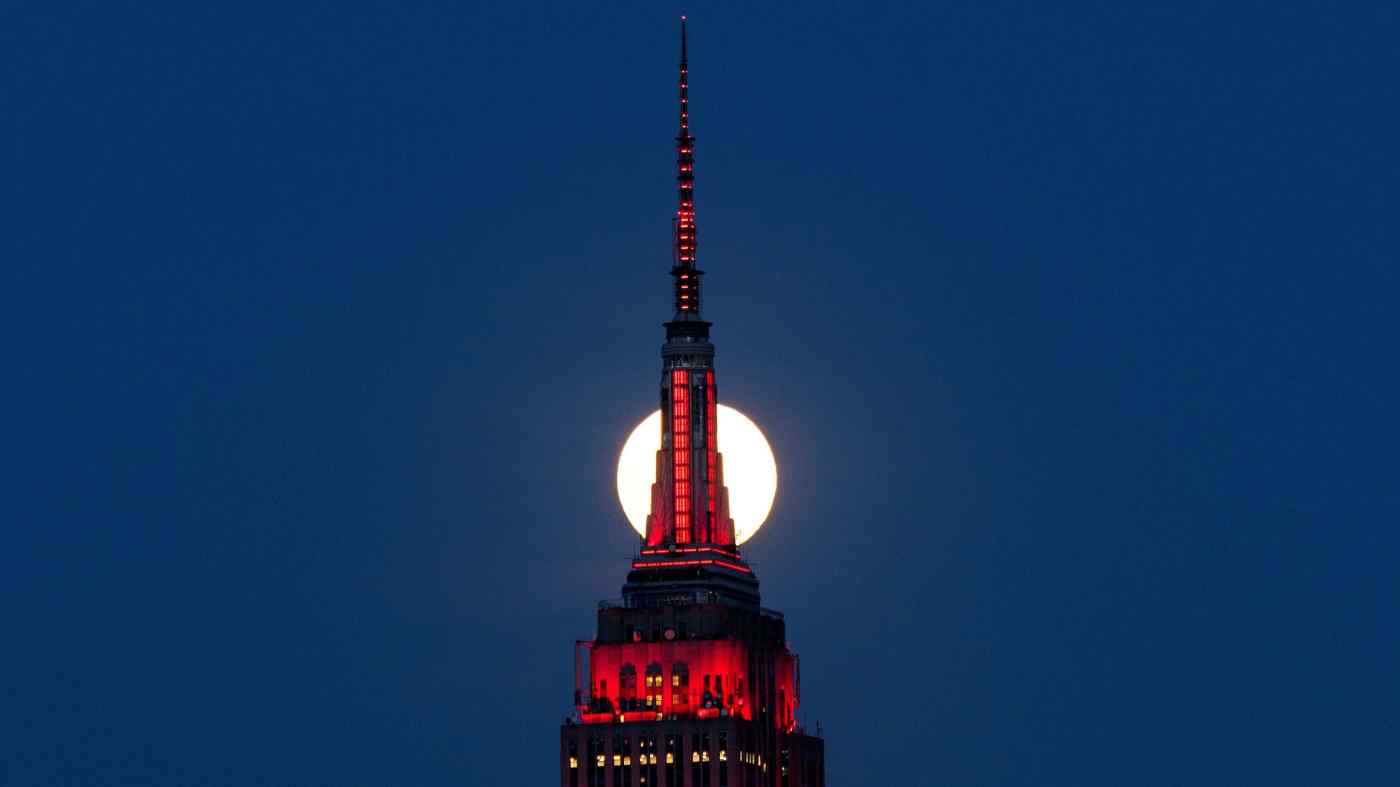 NEW YORK -- As Wuhan lifted itself out of its 76-day coronavirus lockdown at midnight on Wednesday, Chen Long, a native of the central Chinese city, watched videos of the monumental event from his apartment in Flushing, Queens, the biggest Chinatown in New York.

It was Chen's 17th day of staying in.

An hour earlier, New York Gov. Andrew Cuomo announced that the state had hit another high in new deaths, which had appeared to be plateauing earlier in the week.

Chen, 32, who moved to New York about four years ago, runs Heat Noodle, a restaurant serving reganmian, Wuhan's signature dish that became a nickname for the city as other parts of China rooted for its recovery. Now, as Wuhan reopens, Chen's noodle shop in Queens, the hardest-hit borough in New York City, stays closed.

With over 160,000 confirmed COVID-19 cases and over 7,000 deaths, New York state has succeeded Italy as the pandemic's latest epicenter. It is also reminding Wuhan natives of home, where the virus emerged in December.

"It feels like we are going through the outbreak twice," Chen told the Nikkei Asian Review over the phone. "We went from worrying for our family to worrying for ourselves."

Just a few miles away from Chen, Elmhurst Hospital, now a fixture of national media coverage, is overflowing with patients. The 545-bed hospital is among those that have resorted to refrigerated trucks as mobile morgues for the dead. Photos and footage of this have shocked the city. A healthcare worker wheels a body into a makeshift morgue outside the Wyckoff Heights Medical Center in Brooklyn, New York.   © Reuters

Zhou Ran, a Wuhanese student at the Parsons School of Design in Manhattan, said that seeing such raw coverage in New York revived the trauma she experienced during Wuhan's darkest times.

"A lot about the Wuhan outbreak wasn't reported in the media," Zhou said, "and we were only hearing whispers, so we didn't know for sure. But we still had an inkling -- it was probably the same in Wuhan back then."

Over 2,500 Wuhan residents lost their lives to COVID-19, making up the vast majority of China's death toll, according to the official tally.

For most days in late January and much of February, Zhou felt unable to leave her apartment without having a good cry first, as the thought of losing her parents -- a possibility occurring to her for the first time in her life -- was too much to bear.

"I didn't even dare ask my parents about members of the extended family or family friends," Zhou said. "Everyone in Wuhan was only one degree of separation from a confirmed case, and two or three degrees from someone dying from it."

Sun Zhaowei, a young advertising professional from Wuhan, was in the same head space during those weeks. In one of the anxiety-inducing calls he made home twice a day, his mom told him that she had lost a colleague. But as the epicenter of the outbreak shifted, so did his fears.

Sun's husband, a New York native and front-line health worker for the city's Emergency Medical Services, recently tested positive. Having developed a low but prolonged fever, the paramedic has been resting at home for two weeks in isolation. This gave Sun an odd sense of relief: At least his partner does not have to keep exposing himself to the virus.

In Wuhan, at least a dozen health workers were killed by the virus, including Li Wenliang, the 33-year-old doctor who tried to alert others to the initial outbreak.

In New York last week, the death of Kious Kelly, a 48-year-old emergency room nurse, showed America the risks faced by front-line health care workers who are making do with an acute shortage of protective equipment. This makeshift memorial for Li Wenliang was set up at an entrance to the Central Hospital of Wuhan.   © Reuters

"We've clashed over this," Sun recalled, explaining that before New York's sharp rise in cases his husband did not deem the situation as serious as Sun did.

The newlyweds, who currently live apart, had plans to move into their dream apartment in the Brooklyn neighborhood of Park Slope this spring. But the couple could not close the deal before the lockdown. Now they have another worry: Sun's mother-in-law began developing symptoms this week. Their moving in together will have to wait.

Gong Dandan and Peng Xuan, two women in their 30s, were leading members of a 30-person team made up of Wuhan University alumni that raised $1.4 million from the Chinese diaspora in the U.S. The team used the money to secure and ship nearly 3 million pieces of personal protective equipment to hospitals in Hubei Province, where Wuhan is located. 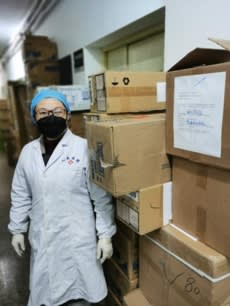 Now as health workers in New York face a comparable, if not worse, shortage of personal protective equipment -- in large part due to U.S. reliance on imports from China and a lack of preparedness -- the experience and connections the team gained by helping Wuhan are proving useful for another round of efforts, for New York.

Taikang Life Insurance, founded by a Wuhan University alumnus, was one of the companies the team worked closely with as it sought to procure protective equipment for Wuhan and establish direct contact with hospitals in Hubei. Now the same kind of backchanneling is allowing Taikang to help New York source protective equipment from China.

In late March, a Taikang-owned hospital in Nanjing called up Mount Sinai, one of the biggest hospital systems in New York, saying that it had a stockpile of masks to spare now that the outbreak there has peaked. Last week, 1.5 million masks, including 350,000 N-95 respirators, were shipped to Mount Sinai on a chartered plane.

An important link between Taikang and Mount Sinai is Yue Zhenyu, a neurology professor at Mount Sinai who was born and raised in Wuhan but has lived in the tri-state area for nearly three decades. In recent weeks, Yue has been monitoring mask shortages in the medical community there and serving as a point person for overseas supplies and donations coming into New York from Wuhan University alums.

"I was working New York hours by day and Wuhan hours by night," Yue quipped.

It was about a month ago -- two weeks before New York state introduced its stay-at-home order -- that Yue realized a severe personal protective shortage was imminent.

Mount Sinai was where New York's first confirmed coronavirus case, a woman returning from Iran, was treated. Yue acknowledged that neither the hospital nor himself saw the outbreak's escalation coming this quickly and explosively.

At the time of China's coronavirus peak, "most Americans, including those at my hospital, didn't really have the foresight" that the outbreak could eventually play out similarly in the U.S., Yue said. "I think that largely had to do with the government response and messaging from the Centers for Disease Control and Prevention."

Yue said many of his front-line colleagues are reusing the same N-95 respirators for days on end.

President Donald Trump's administration has been under fire for its reluctance to fully invoke the Defense Production Act to boost supplies of such protective equipment. One such critic is Trump's rival in the upcoming presidential election, former Vice President Joe Biden, who called the predicament for health care workers a "national disgrace." As he reflected on the past couple of months, Mount Sinai's Yue felt a hint of guilt for being part of a team that had been buying up masks in the U.S. to relieve Wuhan's dire needs. "But again," he said, "we couldn't have known."

Wrapping up his conversation with Nikkei, Yue echoed the sentiments of Andrew Yang, a former Democratic presidential candidate, who last week published an opinion piece in The Washington Post calling Asian Americans to show their "Americanness" and do their part for the country in this time of need despite the racial abuse they have received as COVID-19 has spread.

In recent weeks, reports of hate crimes against the Asian community in the U.S., including violent physical assaults, have spiked, especially after Trump repeatedly referred to the coronavirus as the "Chinese virus," both in his tweets and at White House press briefings.

"We'd like ordinary Americans to know that we have been showing up for this country, too," Yue said. "After all, it's our second home."