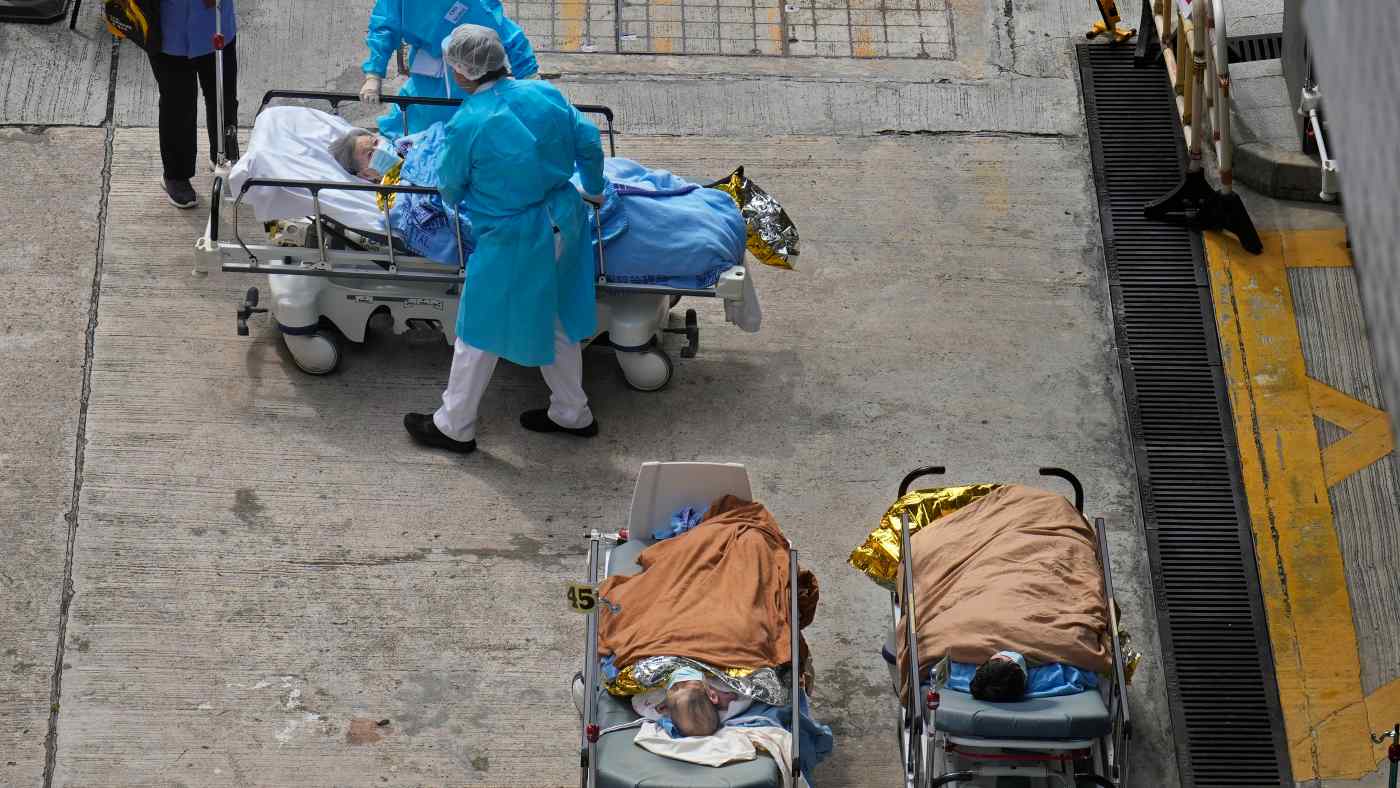 HONG KONG -- Hong Kong Chief Executive Carrie Lam is under intensifying pressure over her handling of the city's worst COVID outbreak, with daily case counts multiplying and thousands waiting for admission to hospital.

Chinese President Xi Jinping raised the stakes for Lam on Wednesday with remarks carried exclusively on the front pages of local newspapers controlled by Beijing, calling on her administration to grasp the "overriding mission" of stabilizing the situation and controlling the outbreak, using whatever means necessary.

After months of calm, Hong Kong is now enveloped by a panic akin to that experienced in many places two years ago.

Until three weeks ago, the city had never seen more than 150 confirmed COVID cases in one day. On Wednesday, health officials reported 4,285 confirmed cases and 7,000 preliminary positive ones, as testing labs struggled to clear a backlog of samples.

Food prices, meanwhile, have soared as an outbreak among drivers bringing in meat and produce from mainland China has curtailed imports already squeezed by the loss of much of Hong Kong's normal airfreight traffic due to the city's tightened pandemic controls.

Thousands of residents have sought to escape the outbreak by crossing into the mainland, even trying to sneak in by boat to get around daily immigration limits. 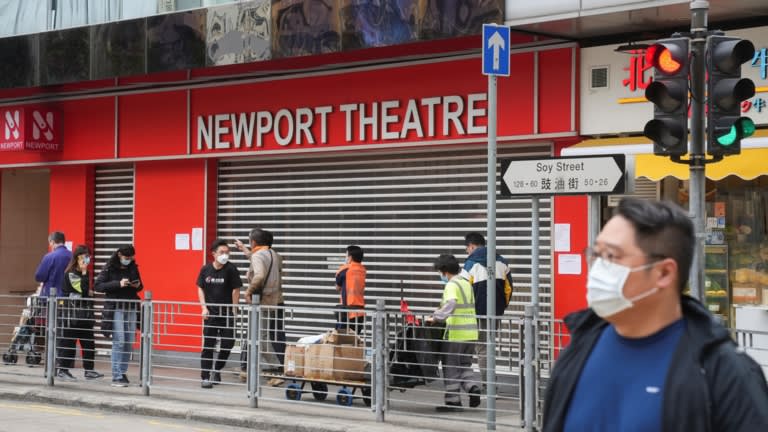 Hong Kong cinemas, along with bars, gyms and spas, have been forced to close under renewed COVID restrictions.   © Reuters

Against this backdrop, Lam must decide whether she wants to seek another five-year term, as election officials are to begin taking nominations for her post on Sunday.

Her administration is coming under fire for failing to better prepare for the outbreak after observing two years of troubles overseas.

The surge of cases has left doctors and nurses like Chan too busy to eat or go to the toilet. At some hospitals, patients in gurneys are kept outside in the cold because of a lack of space indoors. More than 12,000 people around the city were waiting to be admitted as of Wednesday, officials said.

According to newspapers Ta Kung Pao and Wen Wei Po, President Xi asked Vice Premier Han Zheng to relay to Lam his "concern about the pandemic situation in the city and his care for Hong Kong residents."

"Authorities must mobilize all forces and resources that can be mobilized, take all necessary measures and protect Hong Kong peoples' lives and health, as well as ensure Hong Kong's social stability," the reports quoted Xi as saying.

The surge has already burst the bounds of the city's tightly regimented COVID control system, but some medical experts believe the daily case count could even reach 28,000 next month.

Until this outbreak, most overseas arrivals in Hong Kong, vaccinated or not, were required to spend three weeks in a designated quarantine hotel.

Anyone in the city who tested positive for COVID was to be hospitalized and then to stay in an isolation center for two weeks after testing clear. Those judged to be close contacts of a positive case were subject to up to three weeks of isolation. While Hong Kong Chief Executive Carrie Lam has yet to say whether she will run for a new term, businessman Wu Sai-chuen, center, announced on Feb. 16 that he will seek the position.    © Reuters

The outbreak has already forced the government to scale back those requirements and begin to ask people to test themselves at home, but it has yet to make test kits available and is scrambling for capacity to handle new cases.

Dr. Libby Lee, the Hospital Authority's director of strategic development, said Wednesday that anyone with mild symptoms should not even see a doctor. "Because most symptoms, especially if you are vaccinated, will go away in two, three days," she said.

"The problem we are facing is, given the magnitude, pace and severity of this fifth (COVID) wave, it has outgrown our capacity," Lam said on Tuesday, insisting she would maintain a "dynamic COVID-zero" strategy as the city "could not surrender to the virus" but batting away speculation about the kind of citywide lockdown seen in mainland cities like Xi'an.

The government is now seeking to use more hotels, as well as recently completed public housing buildings, as isolation centers. Hospitals, though, are still struggling to clear out healthy patients admitted earlier.

"A lot of people can go home, but they can't be moved home by policy," said a public hospital doctor. "That's why we are under a lot of pressure. It is creating a bottleneck."

Businesses, meanwhile, are struggling to cope with renewed restrictions that have again shuttered bars, gyms, cinemas and spas. Multinationals are squirming under a ban on flights from key partner states including the U.S., U.K, Australia, Canada, India, France and the Philippines.

"The virus is going to be around," Bernard Chan, a member of Lam's advisory Executive Council, told Nikkei Asia. "This is going to keep happening, right? So in a way, you can say that we are also living with the virus, because the virus is there."

"But we will do everything we can to identify and stop that chain through testing," he said. "This can't go on forever, right? Eventually, we just have to, we need to reconnect with the world one way or the other."