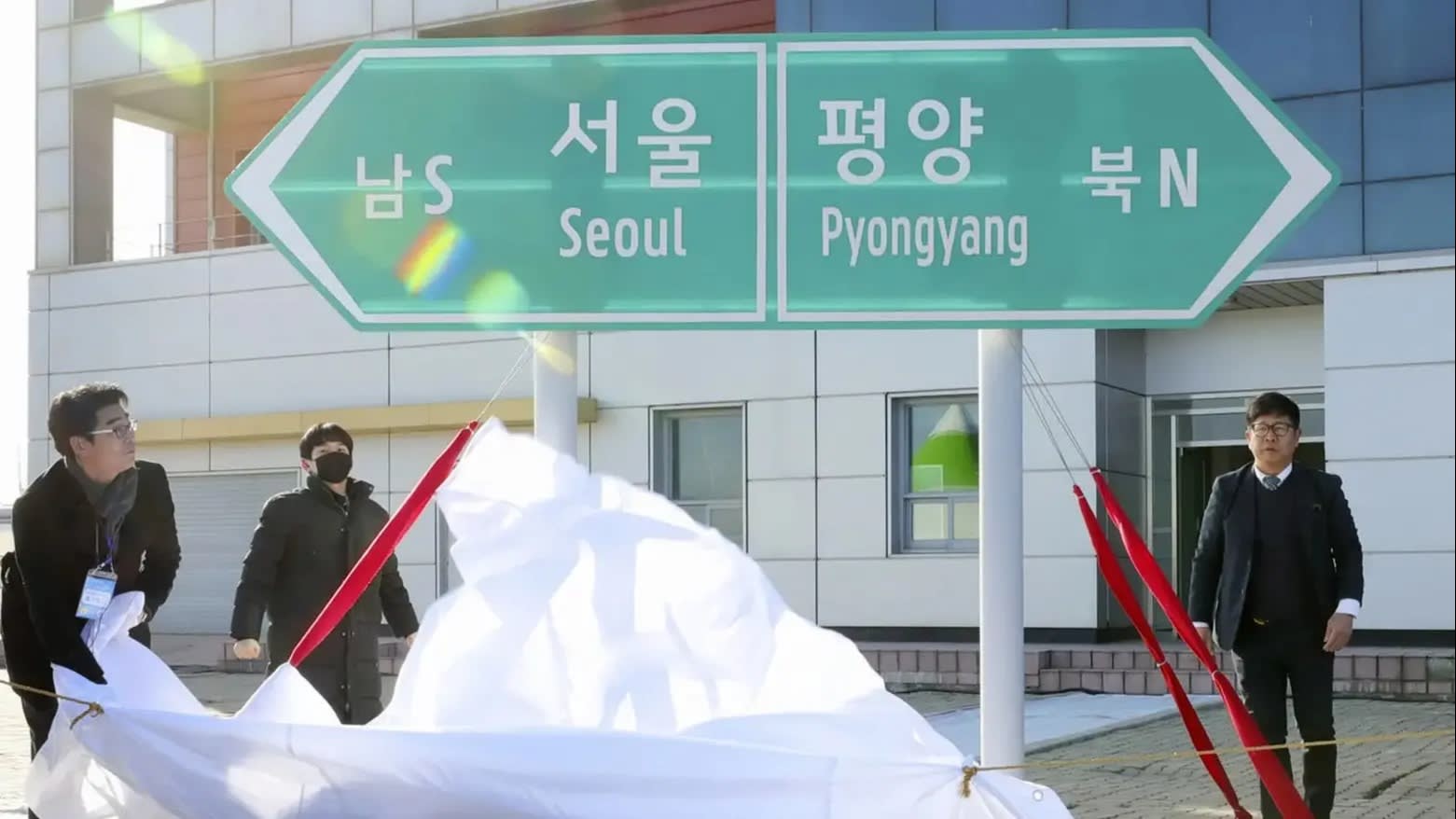 North and South Korean officials kick off a project to link railways and roads between their two countries at a ceremony in Kaesong, North Korea, on Dec. 26.   © Kyodo
Cover Story

Moon envisions a North-South link, but US sanction and funding hurdles loom

TOKYO/SEOUL -- Of all the ambitious railways being planned across Asia, few would have the geopolitical impact of President Moon Jae-in's vision of connecting South Korea with the Trans-China and Trans-Siberian railways.

The first step in realizing this vision would be to reconnect the railways between South and North Korea, which have been largely severed since the Korean War.

Modernizing and reconnecting the railway systems of the two Koreas is a key part of Moon's "New Economic Map" initiative for the Korean Peninsula. He loaded the plan onto a USB flash drive and gave it to Kim Jong Un during their meeting in April.

Estimates for the rail plan vary widely, with some running as high as $35 billion to $50 billion.

Beyond cost, the U.S.-led international sanctions against the North are another potential obstacle for this grand plan. But Moon is determined to realize his vision and make the inter-Korean rapprochement he oversaw last year an irreversible process. In a symbolic first step toward that, the two Koreas in December conducted a joint 18-day inspection of North Korea's coastal railways.

South Korean Transport Minister Kim Hyun-mee noted that a North Korean train on the Kaesong-Pyongyang route runs at only 20 kph, and described the system as "lousy." Samsung Securities estimated that it will cost 3 trillion won ($2.7 billion) to improve North Korea's two railways on the east and west coasts.

A link between the two countries could transform the geopolitics of the Korean Peninsula, converting South Korea "from a geostrategic island into an integral part of the mainland of continental Asia," said Kent Calder, professor of Johns Hopkins University School of Advanced International Studies in Washington.

"It would connect again huge China and much smaller Korea."

Why China is determined to connect Southeast Asia by rail

In 2014, China and North Korea agreed to link high-speed rail lines in Dandong, a Chinese city in the northeastern Liaoning Province, to several cities in North Korea, including Pyongyang. But the project has still not started.

The rail link would bring even more tourists from China into the South, and allow more South Korean cars, smartphones and semiconductors to flow to China -- and possibly beyond.

In June, Moon visited Moscow for a summit with President Vladimir Putin, where he unveiled his idea of connecting the South Korean rail system with the Trans-Siberian Railway via North Korea.

"Korea anticipates that the Trans-Siberian railway will again reach Busan, the southern tip of the Korean Peninsula where I grew up, building on the permanent peace on the Peninsula," Moon said in an address to the Russian Duma.

Putin has made the development of the Russian Far East a priority, said James Brown, associate professor at Temple University Japan.

"Russia was always interested in controlling Korea because it was seen as being important for developing the rest of the Russian Far East," Brown said. "Economically, it seems they still believe that's true."

The rail line from Russia has so far reached only Rajin, a North Korean port near the Russia border.

An agreement signed with Russia in 2014 called for the line to extend across the Korean Peninsula to Pyongyang and on to the North Korean port of Nampo facing the Yellow Sea. It is a 20-year project that would have given Russia access to mineral resources in North Korea in exchange.

But Russia now appears more interested in reaching Busan in South Korea by creating a railway line along the east coast of the Korean Peninsula.

That would leave a high-speed rail line with China as the more likely possibility. But the South Koreans have become cautious about this option, having seen how infrastructure projects in Laos and other small countries have resulted in economic domination by China.

"They have served as examples of what you should not do," Lee said.